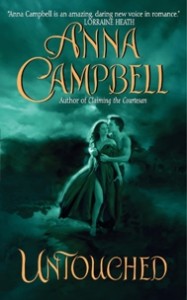 “I am many things,” Lord Sheene said. “Kind is not one of them.”

Beautiful Grace Paget has no reason to doubt these words.  After all, she was kidnapped, spirited away to a remote country manor, and told she is to grant this man his every desire – or lose her life. But Grace is no common trollop. So she risks everything to save her virtue by planning a daring escape, even though she finds herself tempted by this dangerously handsome man. There is something in his eyes that makes her wonder if he is not as cruel as he would have her believe.

Sheene knew nothing of the plan to bring him this woman.  Locked up as a prisoner, called mad by all of society, he will do anything to reclaim his life, and Grace’s sensuous beauty has distracted him from his goals. And although he finds her irresistible, he is horrified to hold her against her will. Now, together, they must both revolt against the strange set of circumstances that have forced them together – for only then will Grace truly surrender to him – forever.

AFTER ANOTHER revoltingly drawn-out moment, Filey shuffled away. Dimly through the pounding in her ears, Grace heard the door shut.

Finally she was alone. She gave a great sobbing gasp and opened her eyes.

She was in a pleasant room with white walls and two doors. The first was closed and the other opened onto a sunlit garden. Her sensation of unreality heightened. Surely she hadn’t been abducted off the public street and brought here to service strangers.

The laudanum’s mind-dulling effects ebbed. Some dissolute aristocrat meant to use her before handing her to his abhorrent henchmen.

She needed to get away now. Before her jailers returned. Before the mysterious Lord John who’d ordered a nice clean tart – she cringed at the description – arrived to see what his minions produced for his delectation.

The opiate still clogged her senses and the vile taste filled her mouth. She desperately wanted a drink of water.

No, she desperately wanted to be back at the Cock and Crown waiting for Cousin Vere.

Panting and sobbing, she began to struggle against the leather ties.

“That won’t do you any good.” As if to confirm what she’d already guessed, a man spoke from the garden doorway. “I should know. I’ve tried to break those bonds often enough.”

She whipped her head around in his direction. Light dazzled her. All she could make out was a tall figure with broad shoulders.

But she heard the voice clearly.

A deep voice smooth and rich as the cream she scooped from the new milk on her farm in Yorkshire. That beautiful cultured baritone frightened her more than all Monks and Filey’s ribald speculations.

Then she realized what he’d said. “They’ve tied you to this table too?”

The man stepped into the room. “Of course,” he said mildly as if the admission held no consequence.

The gold-lined shadow resolved into a gentleman in his middle twenties wearing a loose white shirt and buff breeches. He was more than six feet tall and overly slender for his height, although she didn’t mistake his physical strength. He might be lean, but it was sinewy leanness.

He was the most beautiful man she’d ever seen. Even terrified as she was, she couldn’t help measuring each detail of his appearance.

Fine dark hair grew back from his high forehead. A long straight nose. Sharply cut cheekbones, prominent because of his thinness. His eyes remained downcast under his winged dark brows. He looked like one of God’s angels humbly awaiting direction from the Deity.

Except no angel would study her prone body with quite that level of curiosity.

The heated inspection licked its way up her form with leisurely thoroughness. It lingered at her breasts, making her burningly conscious of her gaping neckline. Every muscle contracted in fear and refusal.

Grace had lived with fear long enough to know facing it down was her only strategy. She glowered at the man. “Are you Lord John?”

His mouth quirked in an unamused smile. “No. Lord John is my uncle.”

“If you’re not Lord John, will you help me? Your uncle has brought me here for…” Words failed her, although she doubted any description she chose would shock this superb and lascivious angel.

That ghost of a smile again. Like the rest of him, his mouth was perfect. Wide enough to be expressive. A sharply defined upper lip. A generous sweep of lower lip.

“His amusement?” The deep voice darkened with irony as he chose the innocuous term for something they both knew was anything but innocuous. He shifted closer so his shadow fell across her. She fought another wave of panic.

Her fingers curled beneath the restricting straps. “Yes. You must help me get away.”

“Must?” The young man stretched out one long-fingered hand to stroke her cheek. His touch was cool but she jerked away as if scalded. He took her chin and held her for his scrutiny. “Hmm. Pretty.”

He terrified her. But he was her only chance of escape before the unknown Lord John arrived. She moderated her tone. “Please, sir. Please help me.”

She’d closed her eyes. Although somehow she knew that fleeting smile flickered and vanished again.

“Ah, I knew you could manage the right note. I find myself moved, madam. That slight break in your voice is a masterstroke. Well done.”

Her eyes snapped open. Strange to be both so annoyed and so scared at the same time. “I protest, sir. You speak like I’m an…an actress trying out for a part.”

“Do I indeed?” He bit out the words. With a flick of his fingers, he released her as though touching her offended him. “How remiss of me when it’s quite clear you’ve already been cast for this particular role.”

He swung away from her with a restlessness she noticed even through her fear. Knowing as she spoke that she’d fail, Grace made one last try for this singular young man’s help. “Your uncle means to rape me. You cannot just abandon me.”

He turned back to her, his remarkable face a mask of well-bred contempt. “This confusion charms, madam. And almost convinces. But we both know you’re here for my use, not my uncle’s. Unless one discounts your purpose as his cat’s paw.”

She licked dry lips. “You must be mad.”

He gave a short huff of humorless laughter and met her gaze for the first time. He had rich brown eyes marked by a sunburst of gold. Beautiful, unusual eyes, colder than anything she’d ever seen.

He spoke quite gently as those strange striated eyes stared into hers. “Of course I am, my dear. Unquestionably and incurably mad.”

What happened to Wolfram and Mrs. Filey?

Thank you to the many people who have contacted me about the fate of Wolfram and Mrs Filey.  I always thought Mrs Filey was rewarded for her courage. I think she escaped Filey who ended up hanging for his crimes. Once she was free of her vile husband, she married a kindly if gruff retired sea captain in Bristol and set up a guest house for retired seafarers. She lived a happy life with a very nice man. I think it’s the least she deserved!

In the Australian edition of Untouched, I included information about Wolfram returning to Matthew. Please find below the relevant section:

She stirred from her troubled doze. She’d dreamed. The dream that still visited with heartbreaking frequency although almost a year had passed since she’d seen Matthew. The dream where his long, powerful body drove into hers, where his arms lashed her close, where his deep voice whispered love.

She whimpered. Her cheeks were sticky with tears. How she hated to wake to a cruel present and the desolation that ran beneath her new life. The grief never faded. Slowly, reluctantly, she opened her eyes.

Matthew stood between the open red lacquer doors at the top of the summerhouse steps. Under one arm, he carried a slim mahogany box.

She exhaled on a soft startled gasp. Graphic, carnal images from her dream flashed behind her eyes and sent heat rushing to her face.

His intent, unblinking stare didn’t shift from her. How long had he watched?

His physical impact was astonishing. In their year apart, she’d forgotten quite how handsome he was. A slight breeze ruffled his thick dark hair, now cut in a fashionable style. With a pang, she remembered his wild black locks drifting like warm silk across her wrist while he’d kissed her hand in farewell. She couldn’t imagine this dauntingly elegant man clutching her with such desperation. She couldn’t imagine him clutching her at all.

After months of thinking of him, dreaming of him, longing for him, now that he was here, he seemed a stranger.

He’d abided by the rules she’d set. They’d had no communication for a year. Even when she’d sent Wolfram to him at Chartington, the acknowledgment had come couched in a secretary’s formal language.

Awkwardly, she sat up. She felt ill at ease, at a disadvantage, sluggish with sleep. She swiped a shaking hand across her cheeks to hide her humiliating tears. She forced her lips into an uncertain smile of greeting.