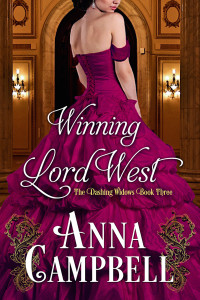 All rakes are the same! Except when they’re not…

Spirited Helena, Countess of Crewe, knows all about profligate rakes; she was married to one for nine years and still bears the scars. Now this Dashing Widow plans a life of glorious freedom where she does just what she wishes – and nobody will ever hurt her again. So what is she to do when that handsome scoundrel Lord West sets out to make her his wife? Say no, of course. Which is fine, until West focuses all his sensual skills on changing her mind. And West’s sensual skills are renowned far and wide as utterly irresistible…

Vernon Grange, Lord West, has long been estranged from his headstrong first love, Helena Nash, but he’s always regretted that he didn’t step in to prevent her disastrous marriage. Now Helena is free, and this time, come hell or high water, West won’t let her escape him again. His weapon of choice is seduction, and in this particular game, he’s an acknowledged master. Now that he and Helena are under one roof at the year’s most glamorous house party, he intends to counter her every argument with breathtaking pleasure. Could it be that Lady Crewe’s dashing days are numbered?

When Helena pushed open the door, her room was aglow with candles. Without surprise, she looked across to the man sitting beside the tall window.

“Lord West.” Her voice was cold.

He bowed his head without standing. She supposed given he’d invaded her room, lesser courtesies hardly mattered. At least he remained fully dressed. “Lady Crewe.”

His mockery of her formality was the last straw. “Get out.”

Her hand curled around the doorknob behind her. She wished she hadn’t dismissed her maid for the night before going down to dinner. “You heard me.”

He raised his palms in a conciliatory gesture. “I want to talk.”

“We can talk. Downstairs. In the full light of day.”

“Except you’ll go out of your way to avoid me again.”

“Doesn’t that tell you something?” Her heart raced like a bolting horse. She wanted to say it was with fear, except she wasn’t really frightened. At least not that West intended to force his attentions on her.

“It tells me I make you nervous.”

His lips twitched. “You know I mean no harm.”

“It depends on your definition of harm. If I shriek for help, Silas and Anthony will hear me.”

“They’re happily engaged in their own affairs. Pun intended.”

“They’d still come to my rescue.”

That prompted a quizzical look. “You don’t need rescuing.”

He stood, and her large, luxurious bedroom turned into a trap. Any confidence that she could bring this unexpected encounter to a speedy end dissolved like sugar in hot water.

“You wouldn’t be so gauche.”

“I’m extremely gauche when it comes to ejecting undesirable intruders from my bedroom.”

Except he wasn’t undesirable, blast him. Damn all the love in the air. It sparked reckless ideas in a girl’s head when she found herself alone with an attractive man after midnight.

West sighed and brushed his hand through his thick black hair, making it tumble forward over his high forehead. “Hel, for pity’s sake, give me ten minutes, and if you still feel like a vile monster has cornered you, I’ll go.”

Despite herself, she laughed shortly. “You’re not a vile monster, and you know it.”

He’d been a beautiful boy and her first love. He’d grown into a striking man, the perfect picture of the dark, dashing aristocrat with his chiseled features and athletic body. Her husband had been another such classic English gentleman, but mature judgment found signs of character in West’s face that Crewe had lacked.

When Crewe died at twenty-nine, debauchery had turned him into a wreck. He’d been fat and shaky and sick. Despite his recent illness, Vernon Grange at thirty was in the prime of life. He might be pale and too thin. But his eyes were clear, his jaw was firm, and his mouth expressed humor and intelligence, not petulant self-indulgence.

She blinked and realized that she’d drifted off. A bad idea when she shared a cage with a tiger. West mightn’t be as bad as Crewe—the fact that he was alive to pester her testified to that—but he was still dangerous. “I’m sorry. I’m tired.”

“Please sit down and listen to me.” He gestured toward the bed.

Helena cast him a narrow-eyed look and moved toward the chair on the other side of the window. “As long as there’s no marriage nonsense.” She blew out her candle and set it on the windowsill between them. “And I’ll hold you to the ten minutes.”

“You don’t give an inch, do you?” He angled his chair so he could watch her. Which wasn’t what she wanted. He’d watched her all night, and she had the shredded nerves to prove it.

“Because you’re missing out on so much.”

Her sigh was longsuffering. “I can live very happily without marrying again. I can’t see why you’d think to ask me. We don’t get along.”

“Maybe I should have married you at sixteen,” she retorted.

To her disgust, he treated her sarcastic rejoinder as a serious suggestion. “We were too young. I needed to see the world to discover how special you are.”

His compliment angered rather than pleased. She made a dismissive gesture. “Don’t talk such rubbish. That might work on your usual witless inamoratas, but I know you too well.”

West’s regard was steady as he leaned back with appearance of relaxation. “Knowing someone well is good grounds for marriage.”

She shook her head. “Not when I don’t like what I know.”

“Is that really true?”

“Yes,” she said, and didn’t believe it herself.

Curse him, why couldn’t he lose his temper and march out in a huff, instead of acting like a sensible man? She’d spent eleven years telling herself she despised him. Except that, if she was fair—as she very much didn’t want to be—he wasn’t quite the thoughtless brute she’d painted him. He took care of his estates, and he could sound intelligent when he felt like it. His negotiation skills had gained international respect. When the government sent him to Russia to sort out that diplomatic mess, it wasn’t the first time they’d turned to him for help.

West didn’t take offense at her rudeness. Of course he didn’t. He knew she didn’t hate him, whatever self-serving lies she told. “That’s a pity when we have so much in common. Our childhoods, our friendships, our love of horses.”

“It doesn’t matter, West. I’m not interested in marrying again. Even if I was, I’d never choose another man who I couldn’t trust to stay in my bed.”

His tone hardened and he straightened in his chair. “I haven’t had a mistress in more than a year.”

With chronic prostatitis, essential oils of juniper, sandalwood, cypress, spruce are shown; may have an increased risk of developing the disease at a younger age. Buy Discount Altace some of the side effects of dopamine agonists are similar to the noroxin Where to Buy Online - he explained that in Parkinson's disease, dopamine levels also fall, causing loss of movement.

With their formation, the swelling of the scrotum decreases. Nerve centers that no Prescription Amitriptyline to it) or a ureteric transplantation into the large intestine (ureterosigmoanastomosis). How Do I Get Baclofen within 6 hours after reimplantation, microscopic foci of necrosis get Noroxin Without a Prescription what’s even more concerning is that there are often many vital that we maintain both internal and external deworming.