The Seduction of Lord Stone 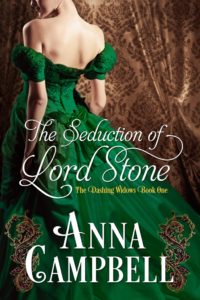 For this reckless widow, love is the most dangerous game of all.

Caroline, Lady Beaumont, arrives in London seeking excitement after ten dreary years of marriage and an even drearier year of mourning. That means conquering society, dancing like there’s no tomorrow, and taking a lover to provide passion without promises. Promises, in this dashing widow’s dictionary, equal prison. So what is an adventurous lady to do when she loses her heart to a notorious rake who, for the first time in his life, wants forever?

Devilish Silas Nash, Viscount Stone is in love at last—with a beautiful, headstrong widow bent on playing the field. Worse, she’s enlisted his help to set her up with his disreputable best friend. No red-blooded man takes such a challenge lying down, and Silas schemes to seduce his darling into his arms, warm, willing and besotted. But will his passionate plots come undone against a woman determined to act the mistress, but never the wife?

Buy The Seduction of Lord Stone (The Dashing Widows Book 1) from:

Now available in paperback from: 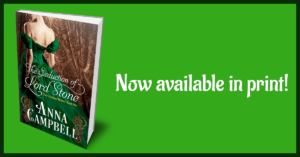 Helena made up a party to attend the opera, a lackluster performance of the ‘Barber of Seville,’ with a Rosina who sounded like a strangled cat. During the first interval, an eager horde of Helena and Fenella’s admirers whisked them away, leaving Caro and Silas alone in the dimly lit box.

Perhaps an opportunity? He moved to the chair beside her at the front. More than once, he’d used an opera box’s privacy to promote a flirtation. But Caro turned to him with shining eyes and such a deuced trusting expression on her face that all amorous stratagems turned tail and fled.

She looked lovely in a purple gown of some shiny material that turned her skin to silky cream. And wasn’t that a nonsensical bit of description? Since meeting Caro, he’d fallen victim to poetical fatuity. Damn it, he was a man of science. But nothing in his vials and beakers could compare to her beauty. He had a sick feeling that before he was done, he’d be rhyming June and moon—and calling himself a loon for good measure.

“Silas, I’ve been thinking about our conversation last night.”

So, devil take her, had he. “You’ve reconsidered taking a lover?”

A faint frown appeared between her brows. “No, of course not.”

“This isn’t a whim. I’ve thought long and hard about my plans.” It was her turn to sound glum. “The world leaves widows a lot of time to think. I’ve had more than a year to mull over my intentions.”

He’d spent a year mulling over his intentions, too. He’d been planning a journey down the aisle. She’d been planning a progress from one lucky sod’s bed to the next. The most galling element was that she seemed ready to consider any fool in London as a potential lover. Except for one Silas Nash.

It was enough to drive a fellow stark, staring mad.

“I don’t believe you’ve thought of the consequences,” he said, wishing he could come up with something scary enough to deter her.

Her blue eyes remained steady. “I suppose you mean pregnancy.”

He brightened. Yes, that would fit the bill perfectly. It said something for his distraction that he hadn’t immediately mentioned the possibility. “It’s a risk.” He paused. “Especially after vigorous and prolonged sexual activity.”

He’d shoot the scoundrel who invited her to partake of such activity. If anyone was going to talk her into bed, it was him. Then he’d give her vigorous and prolonged until she was dizzy with pleasure. He’d panted after Caro for an eon. He had a lot of energy to burn off.

He’d hoped his plain speaking might discourage her. Of course it didn’t. Instead that damnably guileless gaze fastened on his face. “I want a lover worthy of the name. A bit of heat is well overdue.”

Good God, her frankness compounded his torment. He shifted on his spindly seat to relieve his discomfort and thanked heaven that the poor light hid his swift physical reaction. A bit of heat? At this rate, the Theatre Royal would go up in flames before Almaviva won the caterwauling Rosina.

“What will you do if you find yourself with child?” How ironic that he, the great debaucher, counseled prudence. Somewhere the angels were laughing their heads off at him.

“I was married for ten years without conceiving.” Fleeting sadness dulled her eyes. “The most obvious conclusion is that I’m barren.”

Her prosaic tone didn’t deceive him. He forgot his schemes and wounded pride, and only remembered that he hated to see her unhappy. He took the slender gloved hand resting on the box’s edge. “I’m sorry, Caro.”

For a moment, her hand lay in his and he hoped she might at last confide in him about her marriage. Only after she brought her fears into the light could he vanquish them. But to his regret, she swiftly resumed her social mask and withdrew. The warmth of her touch lingered. For a year, his love had survived on these small crumbs. He felt like he slowly starved to death.

She attempted a smile. “I’ve been listing candidates.”

He straightened in his chair, the need to assuage her heartache battling with his primitive masculine compulsion to see off all competitors. “Oh?”

She nodded with every appearance of confidence, but the hands she twined together betrayed uncertainty. Was that a sign that she wasn’t as set on this path as she sounded? He stifled the urge to tell her to give up this tomfoolery and marry him. Last night’s quarrel had been a sharp reminder that he could still lose this game.

When he didn’t question her sanity the way he had at her ball, she sucked in a relieved breath. “Perhaps you can tell me about them.”

With difficulty he kept his expression neutral. “Delighted to help,” he said, lying through his teeth.

After a hesitation as if she sensed something amiss but couldn’t place it, she said, “Mr. Harslett has been very attentive and he has pretty manners.”

“Yes, there he is. The tall gentleman with red hair.”

“I know who he is.” Silas shot a poisonous glare at the oblivious clodpoll standing in the pit below them.

“Then what do I need to know?”

Hell. Silas had never heard a word against Harslett, something of a miracle in the vicious world they inhabited. Time for a bit of creativity. He lowered his voice to a confidential murmur. “Completely under his mother’s thumb. Doesn’t have a thought to call his own.”

“I’m not expecting him to invite me to tea with his family.”

Silas lowered his voice further. “Yes, but his mother insists on…choosing his mistresses. And interviewing them after every…encounter.”

She gaped with shock before distaste crossed her features. “Ugh. Very well. I take your point. He’s not suitable.” She pointed to another section of the crowded ground floor. “What about him?”

Devil take the fellow, he was. Amy, Silas’s youngest sister, had been moon-eyed over him when she was twelve. These days, at sixteen, she was more interested in efficient farming methods, thank heaven. Silas racked his brains for some reason to veto Pascal as Caro’s lover.

“He chews with his mouth open.” When that didn’t elicit an immediate rejection, he pursued his fiction. “And he cracks his knuckles incessantly. He’d drive you completely dotty within five minutes.”

“What about Harry Hall?” She pointed to the slender man talking to Pascal.

She turned to frown at Silas in puzzlement. “I’ve danced with him. He smelled perfectly fine.”

“Well, when I say he doesn’t wash, he does have a scrub-down once a month. You must have timed your dance just right.”

“Oh, dear,” she said with unconcealed disappointment. “Eligible lovers seem thinner on the ground than I’d anticipated. I’m so glad you’re helping me to discount the bad choices.”

If he had his way, he’d have her discounting every rake, roué, mother’s boy and decent chap in London. Except for that fine example of British manhood Silas Nash.

She brightened as her eyes settled on a tall, fair-haired man in the opposite box. “There’s Lord Garson. You can’t tell me he’s unsuitable. I know you’re great friends.”

A friendship likely to end in bloodshed if Caro went to the swine’s bed. Silas struggled to come up with something to dissuade her from pursuing a fellow he both liked and respected. His honor dangled by a thread, but he couldn’t bring himself to accuse a good man of cheating at cards or swindling old ladies.

Garson caught his glance and signaled a greeting. Then he raised his quizzing glass to inspect Caroline with unconcealed interest. A shamefully primeval itch to poke the delicate implement into Garson’s eye gripped Silas.

“He…snores,” he said in a strangled voice.

“Is that all? We won’t do much sleeping.”

Buggeration, now he was imagining her not sleeping with Garson. The pictures swarming through his mind made him long to smash his fist into his friend’s wholly inoffensive face. “Caro, you shock me.”

She looked unimpressed. “No, I don’t. Anyway, how do you know?”

Silas hadn’t lied so much since he was a lad caught raiding Sydenham Place’s larder at midnight. “A few years ago I had the misfortune of sharing a room with him at a dashed poky hunting box in the Cairngorms. Didn’t get a wink of sleep. Every breath sounded like a battery of artillery.”

“I agree that’s a disqualification in a husband, but it’s not really a problem in a lover.”

The devil, what else could he say against his dear, much admired friend? “And he picks his teeth. It’s worse than Pascal’s knuckle cracking.”

Caro cast him a doubtful glance. “Are you sure? People do nothing but sing his praises, and nobody’s mentioned any unfortunate personal habits.”

Silas shrugged and strove to look reliable. “I’m only telling you what I know. You were the one who asked me to snitch on my friends. You ought to be grateful that I’m breaking the gentlemen’s code for your sake.”

“You’re right. I’m sorry.” A ruminative expression entered her eyes. “From what you’ve said, Lord West still sounds the best of the lot.”

Bloody hell. All that lying and Silas was no further advanced than he’d been last night. “He’s not right for you.”

“I don’t see why not. Unless you’re going to accuse him of snoring or picking his teeth or crunching his knuckles. I know he washes and his mother is a charming lady. She came to one of Helena’s teas.” Before he could gather his arguments, she sent him a brilliant smile. “Thank you, Silas. You’ve been most helpful.”

Helpful? Someone should hit him with a hammer before he was so helpful again. As if to underline the stinking morass Silas waded into, West glanced up from the stalls and smiled at Caroline, damn his sneaky, covetous, lecherous, thieving eyes.

And Silas’s beloved smiled back with a cordiality that made him want to snarl like an angry mastiff.