Seven Nights In A Rogue’s Bed 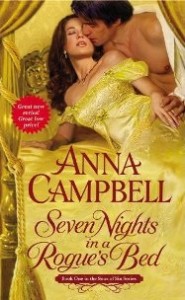 book 1 in the Sons of Sin series

Will a week of seduction…
Desperate to save her sister’s life, Sidonie Forsythe has agreed to submit herself to a terrible fate: Beyond the foreboding walls of Castle Craven, a notorious, hideously scarred scoundrel will take her virtue over the course of seven sinful nights. Yet instead of a monster, she encounters a man like no other. And during this week, she comes to care for Jonas Merrick in ways that defy all logic-even as a dark secret she carries threatens them both.

…Spark a lifetime of passionate surrender?
Ruthless loner Jonas knows exactly who he is. Should he forget, even for a moment, the curse he bears, a mere glance in the mirror serves as an agonizing reminder. So when the lovely Sidonie turns up on his doorstep, her seduction is an even more delicious prospect than he originally planned. But the hardened outcast is soon moved by her innocent beauty, sharp wit, and surprising courage. Now as dangerous enemies gather at the gate to destroy them, can their new, fragile love survive?

Sidonie reached the debris-strewn end of the beach and reined Kismet to a quivering stop. She turned in the saddle to watch Merrick’s thundering approach. The big bay reared to a halt behind her. Merrick’s easy control over the highly strung horse shivered awareness through her. Those skillful hands that calmed a restless horse would soon touch her body.

As he leaned to pat the horse’s satiny neck, he glanced up at her. A light in his silvery eyes indicated he divined the tenor of her thoughts. Of course he did.

“Feeling better?” That slight twist of his lips cut straight to her heart.

She blinked. Her heart? No, no, no. Her heart wasn’t involved. She veered close enough to disaster bartering her body.

He saw her perturbation. “What’s wrong?”

She bit her lip and chose dangerous honesty. “I keep forgetting you mean to destroy me.”

If she hadn’t watched so carefully, she might have missed the troubled frown that darkened his eyes. It struck her that, if Merrick could read her, she was learning to read him. This encroaching intimacy leached resistance, but she didn’t know how to fight it.    “Nothing quite so drastic, surely,” he said mildly. “This gothic setting plays with your imagination.”

The gelding edged closer until Merrick’s leg bumped hers. He reached to curl his hand behind her neck, tangling his fingers in the strands of hair loosened in her reckless gallop.
Heat tightened her skin.

Nervousness crashed through her like a landslide. That cursed promise to allow him access was a mistake, but it was too late to renege.

“Merrick.” She stiffened without drawing away.

She narrowed her eyes. “Jonas, then. Let me go.”

Holding her with gentle implacability, he loomed nearer. His answer was a whisper upon her tingling lips. “Oh, no, Sidonie. Never ask me to let you go. Not yet. Not before we’ve discovered paradise.”

“Stop it.” Her heart thumped so hard, she thought it must burst.

She tensed against his grip. “Balderdash. You’re just playing with me.”

“Most definitely, tesoro. But your dilemma is your own fault. You’re so irresistible and I find myself unable to resist.”

“I’ll bite you,” she said savagely, although she didn’t move.

“I’ll bite you too before I’m done.” His gaze sharpened upon her lips, making her heart hammer a panicked warning. “Eat you like a ripe peach, all juice and sweetness. And lick my lips afterward.”

She knew enough to recognize he meant sin. More than kissing, that was certain. For a rogue like him, kissing must be small beer indeed. “You’re you’re frightening me, Mr. Merrick.”

Although fear was only part of what she felt. License had never lured her. She’d never imagined she’d give her body to a man. But something about Merrick charged her blood with inchoate longing, despite what she knew of him and what he intended for her.

“Seize your courage, Miss Forsythe.” He mocked her formality. Even she felt idiotic calling him Mr. Merrick when he was about to kiss her. Ruthlessness hardened his jaw. “No more preliminary skirmishes, Sidonie. Let’s start the games. To the victor the spoils.”

These love letters from Jonas and Sidonie first appeared in the Ramblings from this Chick and the Romancing Rakes for the Love of Romance blogs as part of their Valentine’s Day celebrations in 2013. I hope you enjoy this glimpse into Jonas and Sidonie’s life together during the events of A Rake’s Midnight Kiss.

It’s late, well past midnight. Cam and Richard both maintain bachelors’ hours, unlike this old married man with a wife and a beautiful daughter to keep him out of trouble. But I can’t finish the day without sending you a few lines of greeting, my beloved. It’s the closest I’ll come tonight to holding you in my arms and feeling your warmth and hearing the sweet murmur of your voice.

Forgive me for basking in my good fortune, but I think I’ve almost become inured to the joy of having you and our lovely little Consuela in my life. I’m sure I haven’t stopped lately to tell you how grateful I am for the gifts of you and our daughter.

When we met, I was a man who had turned his back on any possibility of love. But you, wise Sidonie, knew better. You were stubborn, my love, and I thank God – and you – every day for that stubbornness. If I were to tell you what you mean to me, I’d need the words of a poet and the soul of a mystic, but never imagine that you’re anything less than the beating heart of my life. I love you, Sidonie, and I always will.

This will make you smile, darling. I think Richard may have met the woman who will change his life just as you changed mine. He’s certainly in more of a lather about Genevieve Barrett, the vicar’s daughter here, than I’ve ever seen him. He’s usually so cool and uninvolved, as you know, when he sets his sights on a new conquest. And you’ll laugh at this – it seems Miss Barrett is immune to his famous charm. I wonder if he’s embarked on the journey to love that gave us so much joy and anguish before we found safe harbor with each other.

I close with sending you every ounce of love in the world, my sweet wife. Sleep soundly and I’ll be back by your side before you have the chance to miss me.

Kisses from her besotted papa to that minx in the making, Consuela.

I can’t tell you with what joy I received your note from yesterday. I know that you’re only the mere space of a county away, but I miss you more with every minute.

Hurry back, my love, hurry back. My arms ache to hold you and my lips burn to kiss you and I’m dying to tell you all the fascinating things our daughter has done in the last day. Yes, I know, I’m a doting, foolish mamma. Just as I’m a doting, foolish wife. I suspect there’s no curing me either of my love for our lovely Consuela or my love for you.

Although in a way, I lie when I say I miss you. I feel that since we’ve married, you’ve become part of every breath I take. I thought I fell in love with you during those days of ecstasy at Castle Craven, days that seem so long ago now, although in reality it’s less than a year since I met you and you changed my life forever. But with every minute, I love you more.

So how can I miss someone who is with me each second? It’s quite a conundrum, isn’t it? One for your brilliant mind to stew over as you wend your way back to me tomorrow.
Ride swiftly, my love, ride swiftly. I hope that horse of yours runs faster than the wind. Tell him that if he doesn’t, I’ll put something nasty in his oats.

You’re right, I did smile at the idea of the elegant Sir Richard Harmsworth falling head over heels in love, difficult as I find it to picture the superb baronet allowing himself such a loss of control. I’m sure if you accused him of being in love, he denied it as vehemently as he’d deny it if you accused him of wearing last year’s coat. If he’s in the state you say, it makes me wonder about Miss Barrett. She must be something out of the common way if she’s upset our paragon’s famous sangfroid.

I promise you a suitably wifely welcome when you gallop back to me, my darling. I wish you were in my wifely arms right now, although I suppose I must be generous and share your magnificence with the world – at least now and then.

I long for you more than I can say.

Your stubbornly and eternally loving wife,