A Pirate for Christmas 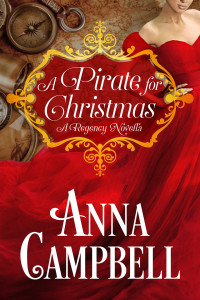 Pursued by the pirate…

Bess Farrar might be an innocent village miss, but she knows enough about the world to doubt Lord Channing’s motives when he kisses her the very day they meet. After all, local gossip insists that before this dashing rake became an earl, he sailed the Seven Seas as a ruthless pirate.

Bewitched by the vicar’s daughter…

Until he unexpectedly inherits a title, staunchly honorable Scotsman Rory Beaton has devoted his adventurous life to the Royal Navy. But he sets his course for tempestuous new waters when he meets lovely, sparkling Bess Farrar. Now this daring mariner will do whatever it takes to convince the spirited lassie to launch herself into his arms and set sail into the sunset.

A Christmas marked by mayhem.

Wooing his vivacious lady, the new Earl of Channing finds himself embroiled with matchmaking villagers, an eccentric vicar, mistaken identities, a snowstorm, scandal, and a rascally donkey. Life at sea was never this exciting. The gallant naval captain’s first landlocked Christmas promises hijinks, danger, and passion – and a breathtaking chance to win the love of a lifetime.

Buy A Pirate for Christmas: A Regency Novella from:

Rory opened the gate and stood back to let Bess and the donkey go through ahead of him. “I don’t believe we’ve settled terms for Daisy’s use.”

Bess fixed startled dark blue eyes on him. “What do you mean? We always use Daisy. It’s tradition.”

A rascally smile stretched his lips as he shut the gate. “There’s a new hand on the tiller at Penton Abbey—or had you forgotten?”

“But…you helped to catch her. And if you don’t let us have her, everyone will be so disappointed.” Her voice firmed. “It will make a bad impression.”

“I wanted to see her to work out what she’s worth.”

Bess brightened. “Are you offering to sell her? I’m sure we can set a price.”

He propped his back against the fence and folded his arms. “Not sell, rent.”

She frowned. “How much?”

Without shifting his attention from Bess, he hooked the heel of his boot on the fence’s lowest rail. “Not how much, what.”

She looked distinctly uneasy now. Again he applauded her instincts. “You’re being cursed enigmatic, my lord.”

Bess looked doubtfully at the small donkey, muddy and unkempt after living outside all summer. “And what might that be?”

“Nothing too ruinous.” Wicked triumph flooded him as he stared unblinkingly at Bess. “One kiss, and Daisy is yours for the play.”

“K-kiss me?” Bess stammered, staring aghast at the handsome, confident man slouched so elegantly in front of her. She was so shocked that she forgot to hold on to Daisy, but luckily Lord Channing had his wits about him and caught her before she scarpered.

“Aye, that’s what I said,” he told her calmly, as if he was a civilized man and not a wicked rake. Because surely only wicked rakes went around kissing ladies they hardly knew.

“The gossip was right,” she muttered, too rattled to mind her tongue.

“That I’m an opportunist?”

His low laugh sent seductive music rippling across her skin. “Good Lord, it seems I’ve provided the locals with plenty of entertainment even before I play Joseph.”

“Which doesn’t mean this particular local has to provide entertainment for you, my lord.”

He plastered a regretful expression on his face. “Of course you don’t. Please forgive me for asking.” He turned to open the gate and started to lead Daisy back the way they’d come.

“Where are you going?” Bess asked, bewildered.

“I’m putting Daisy back in her field. I’m sure you’ll find another donkey. At a pinch, a pony will fit the bill.”

Bess caught a growl behind her teeth. She’d known Channing an afternoon, and already he counted as the most provoking person she’d ever met. Her hands clenched in the greatcoat’s voluminous pockets as she stared after his retreating back.

He’d taken another ten steps before she spoke. “I didn’t say no.”

He pulled Daisy up and turned to face Bess. “You didn’t say yes.”

“You startled me. I’m not used to rogues demanding my favors in return for agreeing to perfectly reasonable requests.”

He sent her a careless smile. “I’m so pleased that I’m broadening your horizons.”

His insouciant air ruffled her temper. He was obviously used to kissing women at the drop of a hat. She couldn’t be nearly so casual about the idea, even if she’d wager he knew how to kiss a girl until he filled her dreams. “You’re proving yourself worthy of your reputation.”

“As a Scot, a pirate, and a philanderer?”

“When you lend us Daisy, you’re helping the community.”

“Looked at that way, so are you when you kiss me.”

The impudent devil. She wanted to call his bluff. And if it wasn’t a bluff, tell him he could keep Daisy, and go away and rot in his shabby, empty mausoleum of a house.

But since he’d mentioned kissing, she couldn’t help staring at that mobile mouth. There was something so sensual about the shape of his lips. The precisely carved upper lip, the fuller lower one. The creases at the corners hinting at laughter.

Of course he was laughing at her. He believed he held a winning hand, while she was about to throw in her cards and declare herself defeated.

Unfortunately, he was right.

He looked surprised. Then pleased.

Nerves knotting her stomach, she faltered back a step. Not just because she’d kiss him, but because of how she’d kiss him. She very much doubted she was up to his usual standard of partner. This man had seen the world, while she’d never been past Newcastle. And she’d bet that he’d left the girls in all those exotic ports kissed to the point of dizziness.

Thinking about kissing him certainly made her dizzy.

He arched one russet eyebrow. “Is that a yes?”

“You’re a naughty man, Lord Channing,” she said, unsure if the remark was compliment or insult.

She made a dismissive sound, even as the excitement pounding in her blood promised that indeed, she would like it. “For the greater good, I can endure a little kiss.”

He snickered softly. “No need to cower, my wee village maiden. I’ll see that your first kiss is memorable.”

Cower? She’d show him cower. “It’s not my first kiss,” she snapped before she could stop herself.

Dear heaven, could she sound any more gauche? Mortified heat flooded her face, making a mockery of the cold day.

“Oh?” Now, plague take him, he looked more interested than ever. “The vicar’s daughter has a shady past. How intriguing. Perhaps you can teach me a thing or two.”

“Don’t be absurd,” she said shakily, curling her hands into fists until her fingernails dug into her palms. Daisy, bored with standing so long, started to nibble at the dry winter grass.

“Who was the lucky laddie?” Channing’s eyes glinted with devilry. “Or was there more than one?”

“You’re not acting like a gentleman, my lord,” she said stiffly.

“But I am acting like a Scot, a pirate, and a libertine.”

“There’s no need to sound so proud of yourself.” Mustering every ounce of courage, she stepped up in front of him. “Very well. I’m ready.”

He caught her arm. “I wish I had another donkey that I could barter for some enthusiasm.”

Interrupting Daisy’s foraging, he shortened her rein and pulled her toward the woods. He marched across the open grass with a determined step, and because he held Bess’s arm, she went, too, more confused than ever. Not least because while she resented Channing cornering her into this disgraceful bargain, she didn’t at all resent the idea of kissing him.

She must be losing her mind.

“Aren’t you going to kiss me?” She cringed that the question emerged more like a complaint than a protest. He’d touched her earlier but now, with kisses in the offing, she was vitally aware of that strong hand curled around her arm.

“For shame, Miss Farrar. Have you no care for your reputation?”

He lowered his voice, although there was nobody except Bess and Daisy to hear him. “If I kiss you in the open, someone might see us.”

Curse him, he was right. Even on a cold, miserable afternoon like this, one of his estate workers might pass by and glimpse them embracing on the edge of an empty field.

“Stop thinking,” Channing murmured, drawing her off the path into a secluded glade. Even in the middle of winter, the leafless trees crowding around them offered privacy. “I can hear your mind churning like a millwheel. It’s putting me off my stride.”

“I can’t help it,” she said unsteadily.

The problem was that she didn’t for a moment imagine it would be bad. She was convinced it was going to be very good indeed. The kind of kiss that made a girl yearn.

Bess was very content with her sequestered life. She dreaded the thought of anyone shattering that tranquility and making her hanker for something beyond Penton Wyck.

Daisy ambled along behind them without any of her usual tricks. Perhaps, like Bess, the donkey recognized Lord Channing as unstoppable, and she’d decided cooperation was the best strategy. For once, Bess wished Daisy would act up. But true to her contrary nature, she followed as quiet as a lamb.

The earl released Bess in the middle of the small clearing and she immediately missed the touch of that large, capable hand. He tied Daisy to a branch, using an impossibly complicated knot that was a reminder of his maritime background. Goodness, he must have been a first-rate pirate. One glance from those purposeful green eyes and any merchant would quail and immediately hand over his cargo.

She’d always considered herself strong-willed. Compared to Lord Channing, she was a sapling in a whirlwind.

“No, she won’t. That knot will hold through an Arctic gale.” That interrogatory eyebrow arched once again. “Are you planning on bolting, too?”

The donkey nosed idly at the leaves scattered about the brown grass. Bess shifted from one booted foot to the other. “Then you wouldn’t let us have Daisy for the play.”

“Quite right.” The smile in his eyes didn’t reach his lips. “If only the villagers knew the sacrifices you’re willing to make on their behalf.”

“I’d rather they never knew about this…disreputable bargain,” she said stiffly, even as her heart raced so fast with sinful anticipation, she felt lightheaded. “Please, get it over with.”

She stood up straight, closed her eyes and pursed her lips, then opened her eyes again when Lord Channing burst into laughter.

“Something amuses your lordship?” she asked coldly.

It took him an exasperatingly long time to stop laughing. “You said you’ve done this before.”

Twice. A long, long time ago.

“Then you clearly have grounds for complaint.”

Her eyes narrowed. “I certainly do now.”

His gaze softened and he studied her face as if he meant to paint her. The prickling, defensive back and forth faded to breathless expectancy.