A Match Made in Mistletoe

Anna Campbell > Books > Novellas > A Match Made in Mistletoe 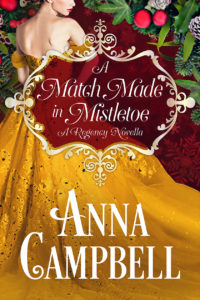 All her life, Serena Talbot has been in love with the handsome boy next door, Sir Paul Garside. She always eagerly looks forward to Paul’s visit to her family over the Festive Season, even if he usually brings along his dark, sardonic friend Lord Hallam. This year, Serena is determined that Paul’s kiss under the mistletoe will lead to a proposal. Even if she has to enlist every ounce of Christmas magic she can get her hands on to make that happen.

But the mistletoe gets it wrong!

When Serena slips a sprig of mistletoe from the village kissing bough under her pillow, it’s not Paul who turns up in her dreams as the man she’s going to marry, but brooding, intense, annoying Giles Farraday, Marquess of Hallam. Still more annoying, once everyone arrives for the annual Christmas house party, she can’t stop watching Giles, and thinking about Giles. And kissing Giles, whether there’s mistletoe about or not. Now Paul wants to marry her, and Giles wants to seduce her–and Serena has a bone to pick with the old wives who came up with all this superstitious nonsense in the first place.

A Christmas of confusion lies ahead! Will mistletoe magic lead the way to a happy ending?

Buy A Match Made in Mistletoe from: 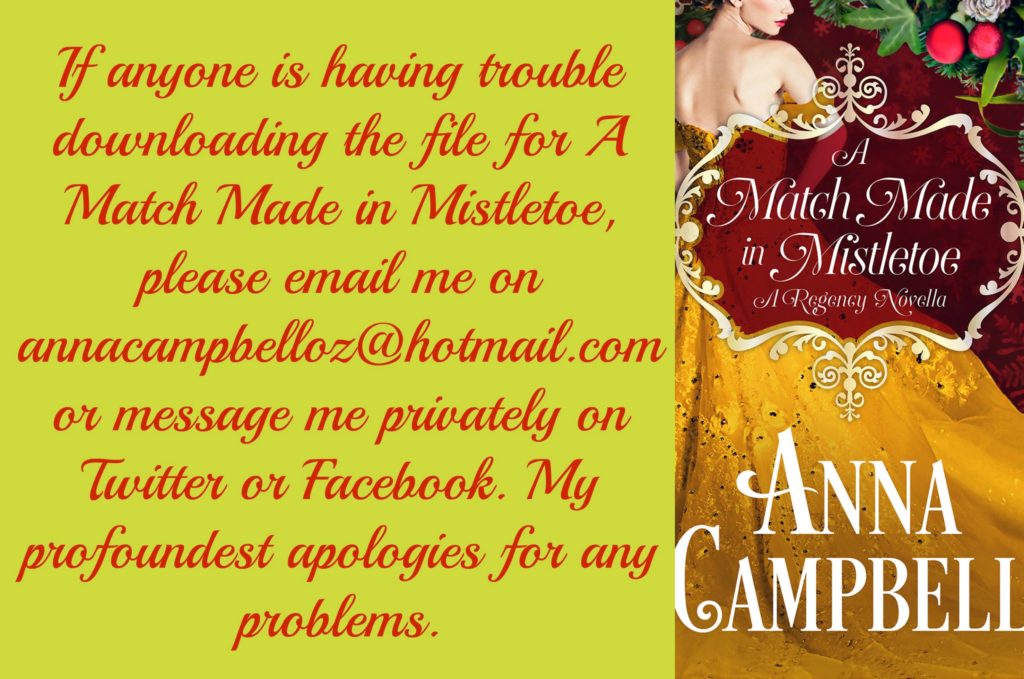 Three days before Christmas, and Serena remained mired in confusion. She should be deliriously happy, and instead, she was more miserable than she’d ever been in her life.

Which made no sense when at last fate granted her dearest wish, Paul Garside courting her. His attentions since his arrival were unfailing, with the emphasis on unfailing.

This afternoon, in a desperate attempt to find a moment’s peace from his constant company, she’d slunk away from the house to seek refuge in the cold and empty village church. When just days ago, the idea that she’d want to do anything but bask in his presence would have seemed preposterous.

But she badly needed time alone to think. To remind herself that all her life she’d wanted Paul to pursue her. She should be ecstatic at his interest.

Instead of scared to death.

When the outside door squeaked behind her, she gave a guilty start. Even if she had nothing to feel guilty about. By heaven, she was turning into a bundle of nerves.

Foreboding in her heart, she glanced back from where she sat in the family pew. Several times Paul had tried to corner her, starting with a chilly stroll in the knot garden the day he arrived. She feared he wanted to get her alone so he could propose. And however unlikely the fact, fear wasn’t too strong a term for her reaction to that prospect. Just now, she was in too much turmoil to make any decision.

Oh, how she wanted to kick herself.

The new arrival wasn’t Paul. But he wasn’t much of an improvement. Instead of a tall, fair-haired man, a taller man with dark, sensual features stood in the arched doorway leading through to the vestibule.

“So this is where you’re skulking,” Giles drawled, sweeping off his hat as he entered the body of the church. He was casually dressed for the country, in a black coat, doeskin breeches and boots. His insolent gait a silent challenge to sanctity, he sauntered up the aisle toward her.

“I’m not skulking,” she snapped. Although to her shame she was. She slumped back into her seat. “Quiet contemplation is appropriate to the season.”

“Paul wants to talk to you.” Giles paused beside the pew and regarded her like some curious scientific specimen.

“Oh,” she said glumly, but when Giles’s eyebrows rose, she straightened and injected false enthusiasm into her manner. “I wonder what he wants.”

She knew. He wanted her staring up at him with starry-eyed adoration as he outlined the future that she’d planned all her life. “He didn’t say?”

“I didn’t ask. Last I saw, he was checking the stables. They were your regular haunt before you became the Belle of Torver.”

“The Belle of…” A blush rose. Which was ridiculous. Giles’s tone was taunting rather than admiring. “I should go and find him.”

But she didn’t shift.

Giles did. To her dismay, closer rather than away.

Her heart somersaulted in a most disconcerting manner. Curling her fingers into her dark green merino skirts, she told herself to settle down. She didn’t like this odd, prickly awareness of her brother’s friend, but she couldn’t control it. She wasn’t lurking in the church only to escape Paul. These days, Giles Farraday was just as troublesome.

“Oh, for God’s sake, make him put in some work to catch you. He’ll savor his victory all the more if he has to make an effort to win it.”

Appalled, Serena stared at him, while another blush stung her cheeks. “What did you say?”

“Would you rather play coy?” He opened the gate to the pew and stepped into the small box to sit beside her. Immediately the echoing space of the parish church shrank to suffocating narrowness. Her nincompoop heart performed a drunken jig in her chest.

She scooped in a shallow breath, sharp with frankincense and old, damp stone and made herself speak. “Why on earth does everyone think I’ve set my cap at Paul Garside?”

With a mocking smile, Giles set his hat on the seat beside him. “Dear me, I have no idea.”

His sarcasm made her wince. “Hmm.”

Blindly she stared toward the altar, decorated for Advent with an embroidered violet cloth and holly wreaths. After a long time—or what felt like a long time—Giles murmured, “There’s no need to be reticent. He’s well and truly reconciled to being caught.”

She wanted to tell this overweening lout to mind his own business, but to her surprise she responded honestly. “That’s easy for you to say.”

Giles’s expression was unreadable. She should be used to that by now. “Trust me.”

Serena told herself not to respond. She’d said enough. More than enough. Giles and she had never been confidantes. In fact, however constant a presence he’d been in her life, they’d never progressed much beyond wary acquaintances.

But some imp inside her remained determined to pursue this mortifying conversation. “I’d…I’d like to think he might do at least some of the chasing.”

“Just as a matter of pride.”

Characteristic irony twisted his lips. “I’m sure a clever girl like you can snare a fellow who’s already set on having you.”

Self-derision edged her laugh. “Then you have more faith in me than I have. When it comes to feminine wiles, I’m a complete novice. Whereas you two have spent the last few years playing the rake in London.”

Amusement lit Giles’s dark eyes. “I take umbrage at that.”

“And how the devil do you know that?”

“Frederick is indiscreet in his cups.”

His laugh brushed across her skin like velvet and made every fine hair stand up. “Damn.”

“Paul is used to sophisticated women.” As her blush heated to fire, she squared her shoulders. She may as well finish this awful discussion. Retreat no longer seemed like an option. “I’ve never even kissed a man.”

Giles appeared almost as shocked at her confession as she was that she’d made it. Fleetingly he stopped looking like Lucifer sulking in the underworld, and instead became the boy who was a mere five years older than she was. “Serena…”

“There. Now you know the dreadful truth.”

Giles had always been something of a mystery to her—this was the longest time they’d ever spent alone together—but his reaction now was particularly cryptic. His marked eyebrows drew together, more in consideration than disapproval, she thought. “You know, perhaps I could help.”

Her lips turned down. “How?”

She had the uncanny feeling that he waged some battle with himself. When he met her eyes, she drowned in the dark depths. “I could show you how to kiss a man.”