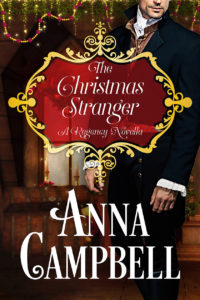 At Christmastime, a stranger crossing the threshold means good fortune…

When Josiah Hale, society’s favorite aristocratic architect, stumbles upon an isolated manor house in the middle of a snowstorm, he feels like he’s entered a fairytale world. And Sleeping Beauty in this secret corner of Yorkshire is lovely, vulnerable Maggie Carr, surely a princess disguised as a humble housekeeper. Is Josiah her prince – or the man who will break her heart and leave her life in ruins?

But is the stranger’s arrival lucky for the girl Christmas forgot?

Maggie Carr has worked as a housekeeper at isolated Thorncroft Hall since her beloved mother died five years ago. No matter how often she tells herself she’s accustomed to being poor and alone, Christmas always stirs poignant memories of a time when she had a place in the world and a family to love. But this Christmas, a handsome stranger bursts into her solitary world and makes her feel like a desirable woman. Maggie has already lost so much to cruel fate. Now as the season advances and she finds herself in thrall to the man who challenges her loneliness and turns winter nights to sultry summer, what price will this irresistible passion demand of her?

Will the Yuletide enchantment vanish with the season’s decorations? Or have Maggie and her Christmas stranger discovered a magic to sustain them through a lifetime of happiness?

Buy from Amazon, Barnes and Noble, Smashwords, Kobo, and iTunes.

There was something evocative about silent woods where the only tracks belonged to wild creatures like deer and pheasants and rabbits. It was still freezing, but the snow overnight hadn’t been as heavy.

The pond, as Joss expected in this magic kingdom, was perfect for skating. Long, and wide enough for acrobatics should he decide to show off, and fringed with willows turned to white lace with frost. A thick branch even extended over the ice, ideal for them to sit on while they strapped on their skates.

Slipping a little, he ventured out to test the thickness, but a lifetime’s skating with his family already told him that the ice would easily bear the weight of two people.

Margaret hovered on the bank, looking uncharacteristically nervous. Carefully he made his way back to her. The ice was deuced slippery, which boded well for a good afternoon’s sport.

She was bundled up again, like she’d been yesterday. When he reached out to take one gloved hand, he was pleased at how readily she accepted his touch.

He’d been touching her most of the day. The pleasure had soon turned to torture. Because the brief, chaste contacts weren’t enough. He wanted more than to place a hand at her waist to steady her as she climbed up to drape ivy over a picture, or suffer the cool brush of her fingers as she passed him the scissors.

His fingers itched to linger and explore. His arms ached to draw her close. He burned to kiss her.

Hell, he wanted to do much more than that.

Margaret had no idea how close he’d come this morning to slamming her up against the wall and kissing her to the edge of madness.

But every time his desire threatened to overmaster his honor, she looked at him with such shy trust that he couldn’t do it. She was looking at him like that now.

She cast an uncertain glance at the pond. “I’d much rather watch you.”

“Not good enough. I’ll hold your hand.” More torture, not that he had any intention of denying himself the privilege. He squeezed her fingers in silent encouragement and pulled her toward the branch over the pond. When she resisted, he looked back with a smile.

“Don’t be a goose, Margaret. A woman who can defend her castle from a great brute of an invader can’t be scared of a little ice.”

“But I didn’t. The brute got in anyway.”

Spreading his feet to keep his balance, he caught her round the waist and lifted her across to sit on the branch.

She scowled at him with adorable displeasure. “You can’t win every argument by grabbing me and putting me where you want me.”

“Why not? So far, it’s working.” He returned to collect the skates from the bank. “And don’t think of moving.”

“You’re such a bully,” she said without heat.

He smiled. “You just don’t like anyone else giving orders. Are you going to let me put on your skates?”

“Good.” Taking off his gloves, he dipped to his knees. When he lifted her foot, it looked absurdly dainty in his hold, despite the sensible half-boot. He took a moment to admire her shapely ankle in its black woolen stocking. Deftly he buckled on the skate. Then he repeated the action for the other foot.

“Stay there,” he said, his voice gruff as he fought the urge to bury his face in her lap. It was cold enough to freeze the balls off a polar bear, yet Joss felt so hot, he could explode.

He sat beside Margaret, and this time was cautious enough to keep his distance. All this agony was to no purpose, even if she said yes—and that was as likely as that freezing polar bear dancing a gavotte. He could hardly seduce the girl on a snowy bank.

Once his skates were on and he’d replaced his gloves, he stood and launched into a powerful glide across the ice. He came to a stop and twirled several times before facing her. It seemed he did want to show off.

Her face was alight with admiration. “My goodness, you look at home.”

He skated in and held out his hands. “Come on. You’ll like it.”

Inevitably his mind focused on something else she’d like. To his relief, she wobbled so badly on her skates, he had to put his licentious thoughts aside and concentrate on saving her from toppling over.

“Go slowly,” she said, at last finding a tottering balance.

Devil take it, did everything he said have to sound like an invitation to bed sport?

He stared into her eyes and waited for her to stand up straight and steady. Very slowly, he backed out onto the pond.

As he’d expected, she soon found her feet, and her grip on his hands eased from the deathly clutch. “Better?”

She nodded, although the tense line of her lush mouth told him she wasn’t yet at ease. “Yes.”

Shakily she released his hand, and for a few moments, they skated side by side. With every minute, she gained in confidence. Gradually he built the pace, until they glided smooth and graceful across the ice and the wind lifted his hair.

He glanced at her face and was delighted to see pleasure had replaced terror. Her cheeks were flushed, and her remarkable eyes were bright. He drew her around in a great swooping arc that sent her skirts belling out.

“You’ve remembered how,” he said, as she stopped beside him with breathtaking skill.

“I’d forgotten what fun it is.”

“We’ve hardly started,” he said, wanting to show her every pleasure in the world. And for once, he wasn’t thinking about what he wanted to do to her in his bed.

Right now, in her dowdy winter clothes, she was the loveliest woman he’d ever seen. He’d met society’s diamonds, and none could hold a candle to Margaret Carr on this hidden, icy pond in the depths of wildest Yorkshire.

He caught her free hand and turned around fast, surprising an excited laugh from her. Then he caught her waist and skated swift as an arrow down the pond. And damn him, if she didn’t keep up. When they reached the end, she pulled away to skate free. For breathless minutes, he pursued her as she swung off, laughing. When he reached her, he spun her into a wild waltz.

The short winter day drew in around them, but he couldn’t bring himself to leave the ice.

Until finally he caught her by the waist and deliberately overbalanced into a thick snowbank rising above the edge of the pond.

Laughing, she tumbled down beside him, gripping his hand tight. “Oh, that was a rotten thing to do.”

Breathlessly he struggled up on one elbow so he could lean over her and stare into her unforgettable face. He watched the laughter fade from her eyes, as they darkened with sensual awareness.

Knowing he broke every rule, but unable to resist, Joss lowered his head and placed his lips on hers.