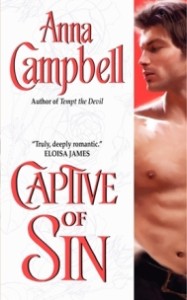 He pledged his honor to keep her safe…

Returning home to Cornwall after unspeakable tragedy, Sir Gideon Trevithick comes upon a defiant beauty in danger, and vows to protect her whatever the cost. He’s dismayed to discover that she’s none other than Lady Charis Weston, England’s wealthiest heiress – and that the only way to save her from the violent stepbrothers determined to steal her fortune is to wed her himself!  Now Gideon must hide the dark secrets of his life from the bride he desires more with every heartbeat.

She promised to show him how to love – and desire – again…

Charis has heard all about Gideon, the dangerously handsome hero with the mysterious past. She’s grateful for his help, but utterly unwilling to endure a marriage of convenience – especially to a man whose touch leaves her breathless. Desperate to drive him mad with passion, she would do anything to make Gideon lose control – and fall captive to irresistible, undeniable sin.

Gideon opened the carriage door for her. Again, he didn’t assist her inside. The easy, automatic action of a gentleman. Yet he didn’t do it. Instead, Akash stepped forward and helped her into the carriage. Wearing the greatcoat loose around her shoulders and with her sling, she couldn’t have managed otherwise.

“Thank you, Akash,” she murmured and was hardly aware when he moved away.

Instead, her eyes fastened on Sir Gideon who waited outside. A cloud covered the moon and the striking face became a mixture of shadows and light. Still beautiful but sinister.

She shivered. “Who are you?” she whispered, subsiding onto her seat.

“Who are you?” His dark gaze didn’t waver from her as he resumed his place opposite, his back to the horses, as a gentleman would.

Charis wrapped the coat around her against the sharp early morning chill and settled her injured arm more comfortably. “I asked first.”

It was a childish response and she knew he recognized it as such from the twitch of his firm mouth. Like the rest of his face, his mouth was perfect. Sharply cut upper lip indicating character and integrity. A fuller lower lip indicating-

Something stirred and smoldered in her belly as she stared at him in the electric silence. What a time to realize she’d never before been alone with a man who wasn’t a relative. The moment seemed dangerous in a way that had nothing to do with her quest to escape Felix and Hubert.

“My name is Gideon Trevithick.” He paused as if expecting a response but the name meant nothing to her. “Of Penrhyn in Cornwall.”

“Is that a famous house?” Perhaps that explained his watchful reaction.

Another wry smile. “No. That’s two questions. My turn.”

She stiffened although she should have expected this. And long before now.

“I’m tired.” It was true, although a good meal and Akash’s skills meant she didn’t feel nearly as low as she had.

“It’s a long journey to Portsmouth. Surely you can stay awake a few moments to entertain your fellow traveler.”

She sighed. Her deceit made her sick with self-loathing. But what could she do? If she told the truth, he’d hand her over to the nearest magistrate.

“I’ve told you my name and where I live. I’ve told you the disaster that befell me today. I seek my aunt in Portsmouth.” Her uninjured hand fiddled at the sling and betrayed her nervousness. With a shuddering breath, she pressed her palm flat on her lap. “We’re chance-met travelers. What else can you need to know?” She knew she sounded churlish but she hated telling lies.

In the uncertain light, his face was a gorgeous mask. She had no idea if he believed her or not. He paused as if winnowing her answers, then spoke in a somber voice. “I need to know why you’re so frightened.”

He made a slashing gesture with his gloved hand, silencing her. “If you truly had been set upon by thieves, you wouldn’t have hidden in the stable. Won’t you trust me, Sarah?” His soft request vibrated deep in her bones and for one yearning moment, she almost told him the truth. Before she remembered what was at stake.

“I-I have trusted you,” she said huskily. She swallowed nervously. His use of her Christian name, even a false one, established a new intimacy. It made her lies more heinous.

Disappointment shadowed his face as he sat back against the worn leather. “I can’t help you if I don’t know what trouble you flee.”

“You are helping me.” Charis blinked back the mist that appeared in front of her eyes. He deserved better return for his generosity than deceit.

She tried to tell herself he was a man and for that reason alone, she couldn’t trust him. The insistence rang hollow. Her father had been a good man. Everything told her Sir Gideon Trevithick was a good man too.

She forced a stronger tone. “It’s my turn for a question.”

He folded his arms across his powerful chest and surveyed her from under lowered black brows. “Ask away.”

It frightened her how much she yearned to know about him. Curiosity raged like a fever. But to her utter mortification, the first question that emerged was, “Are you married?”