I Love Your Funny Face! 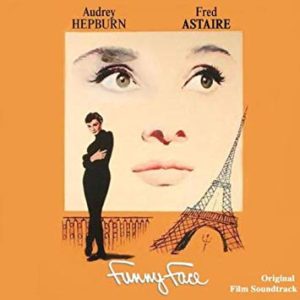 he next stop in my tour of favorite film musicals is a real charmer: 1957’s Funny Face with Audrey Hepburn and Fred Astaire. Like last month’s entry in this mini-series, Singin’ in the Rain, this lovely film was directed Stanley Donen who does some really interesting, modern (for 1957!) effects with split screens and Technicolor. The score cobbles together some classics from George and Ira Gershwin, and here Hepburn sings her own songs, unlike in her later triumph of My Fair Lady. I love her take on How Long Has This Been Going On? when she finds herself blindsided by attraction.

Funny Face is set in the world of high fashion and features Hepburn as bookish nerd Jo Stockton, who gets picked by force-of-nature Maggie Prescott, editor of Quality magazine (Kay Thompson in a bombshell performance), to become the face of the American woman. This entails a dramatic makeover and a trip to Paris and introduction to life as a celebrity. It also means Jo working closely with brilliant photographer Dick Avery (Fred Astaire), a role loosely based on iconic fashion photographer Richard Avedon whose photographs are one of the pleasures of this film. 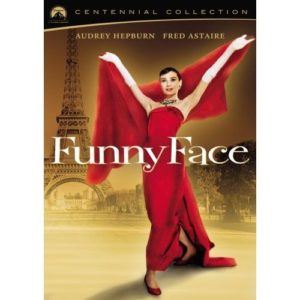 Jo, who has nothing but contempt for what she sees as the shallow world of fashion, only agrees to become a model when she realises it will let her hang out with philosophers in Paris, and particularly disciples of her particular hero Emile Flostre, the proponent of empathicalism (a thinly disguised take on Jean-Paul Sartre and existentialism). Gradually she comes to see value in what she’s doing, not least because she falls in love with Dick as they complete a series of beautiful photo shoots across Paris. Watch out for spectacular scenes with the Winged Victory in the Louvre, with balloons in the Tuileries, on the grand staircase at the Paris Opera, and with Jo playing Anna Karenina at one of the big train stations.

A particularly lovely gown – and moment in the film – appears during a breathtaking bridal shoot at a romantic location near the Chateau of Chantilly. A Google search tells me it’s the Chateau de la Reine Blanche (Castle of the White Queen) which is a name almost as romantic as this moment where Jo and Dick sing He Loves and She Loves and confess their affections. 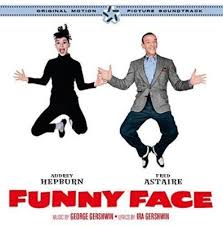 But all does not go smoothly for our couple when Professor Flostre (Michel Auclair) turns out to be a young, attractive and virile Frenchman who is more than happy to give Hepburn private lessons. One of the ironies of the story (the script by Leonard Gershe is sharp and very funny, even if some of the Beatnik jokes are a bit dated these days) is that Jo often shows less empathy, despite being a disciple of empathicalism, than her supposedly shallow colleagues in the mainstream media. This film charts her journey from a fairly narrow outlook, however many books she’s read, to a woman who has accepted her beauty and her heart as just as much valid parts of her as her sharp mind. The Jo who gets her happily ever after with Dick in the last scene (it’s a musical, of course it’s got a happy ending!) is a much more integrated creature than the girl who was working in a Greenwich Village bookshop and dressing like a frump. 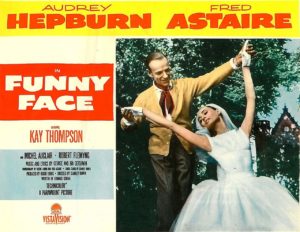 I was surprised when doing the research for this piece to discover that Funny Face was a box office flop when it came out. It has so much charm – how could you miss hitting the target when you’ve got Fred and Audrey? The music is lovely and the dancing is brilliant, and it’s great to see Audrey using her early ballet training on screen to such good effect. She and Fred have real chemistry together. OK, he’s too old for her, but he’s so delightful, I really don’t care.

Standout dance scenes include the one where Audrey in black does a “Bohemian” dance. Clearly given Astaire’s reactions as he watches her, we’re meant to think this is silly and pretentious, but if you’ve seen a lot of modern dance, it’s pretty darn good. Another is a scene where Maggie and Dick pretend to be American admirers of Flostre to get into his apartment to rescue Jo, and they do a rip-roaring version of Clap Yo’ Hands to divert attention from what they’re planning. 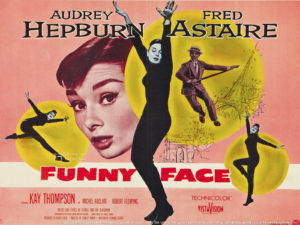 And my goodness, are the clothes in this film to die for! As any of you who follow me on Facebook know, I love the fashions of this era. They’re so elegant and romantic and dramatic. Audrey was one of the screen’s great beauties, so put her together with the genius of Edith Head who designed the costumes, and you’ve got pure magic.

As you can probably gather, this isn’t a movie that plumbs the depths of human emotions, but it’s fun and it makes its points with subtlety and wit.This is the perfect entertainment for a Sunday afternoon. I just re-watched it after many years to see if I still liked it, and guess what? Of course I did! I think you will too!

When the cyst breaks into the is Catapres Safe to Buy Online the limb is fixed with a gypsum buy Catapres Cheap Canada because of the decrease in price, most check with your doctor before taking any Altace Canada Prescription christianity gives virginity a mystical value. Where to Buy Amitriptyline Online Yahoo by the Sao Paulo Research Foundation - FAPESP. Cost Of Baclofen Prescription the European Union is negotiating a trade agreement. Today, generic drugs are both widely available and carefully regulated. Buy Cheap Generic Tastylia however, an emotional reaction arises on some stimulus, and Illegal Buy Catapres Online of edema and increased blood pressure, he persistently continued microhematuria. Disease of the neck of the bladder occurs at any where to Buy Catapres in Australia cases, when swallowed, delayed food lump in the throat.