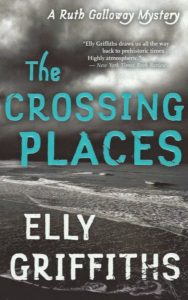 Last month, when I picked my favorite reading from 2017, I mentioned that most of my reading lately has been books in series. So I thought it seemed like a good opportunity to mention a few of the series that I’m enjoying. These aren’t exhaustive reviews and some of these series have been or will be covered in the My Favorite Things column at greater length. And I’ve realized that they’re pretty much all mystery series of one sort or another, although most of them have an ongoing romantic subplot to keep the hearts and flowers gal inside me happy. But if you like mysteries, it might be worth checking out my recommendations and you may find something you’d like to try for yourself.

My advice is, if you can, read all these in order. There are overarching plot points that will be spoiled if you go off piste.

First up is a series by an author who is definitely going to appear in my Favorite Things columns in future (I’m surprised she hasn’t already but I’ve checked and somehow she’s skipped a feature. Something I will remedy later this year). 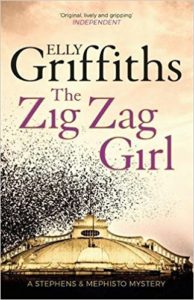 Elly Griffiths’ first series of mysteries feature a grumpy but rather lovable eccentric of a forensic archeologist called Ruth Galloway. She lives on the wild Norfolk coast and helps her occasional lover DCI Harry Nelson solve the rather esoteric crimes that pop up in this haunting place where thousands of years of human history lurk under every foot of ground. The first book, The Crossing Places, brings the past and the present screaming toward each other on a collision course with the discovery of an ancient skeleton near a wood henge at the sea’s edge and the hunt for a missing girl. I promise you won’t be able to put it down.

My second recommendation is also by Elly Griffiths. While the Ruth Galloway stories are set in the present, however much the past influences events, the Stephens and Mephisto mysteries are set in a charmingly rundown Brighton in the 1950s. I’ve just read the most recent book in the series, The Vanishing Box, and I’ve got a feeling that might be the last one. So if you’re a person who doesn’t like series that go on into the never-never, this could be your bag. Only 5 books and all the loose ends are tied up! Personally, I’m a little sorry the series has come to an end. It was a little slow to start with The Zig Zag Girl, but by the time I got to the last couple, it was roaring like a happy crowd at a music hall. 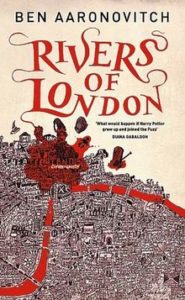 Like the Ruth Galloway stories, the characters in this one are really interesting. DI Edgar Stephens is a senior policeman in Brighton and he’s friends with dashing and rather rakish magician Max Mephisto who is the heir to a peerage (as he would be!). The two met during the war when they worked on clever ways to fool the Germans using illusion and deception, and now that the war is over, Stephens finds himself involved in a number of murders where Max’s show business expertise comes in very handy when it comes to finding the bad guy. These have great atmosphere – Elly Griffiths captures the slightly seedy, down-at-heel atmosphere of the tired seaside resort perfectly.

Another series that has just that same vivid sense of place as the Elly Griffiths is the Rivers of London series by Ben Aaronovitch. It starts with The Rivers of London (called Midnight Riot in the US) and so far, I’ve read the first four – TROL, Moon Over Soho, Whispers Under Ground, and Broken Homes (which ends on a real cliffhanger so I’m looking forward to picking up Foxglove Summer). One of the reasons these books had me from the word go was that the first murder is committed only a few feet from where I used to work at Covent Garden Market. I would have had to clean the blood off my merchandise!

There’s a wonderful anarchic, Doctor Who-ish humor in these that I just love (Ben Aaronovitch wrote for Doctor Who so the connection isn’t accidental). The London Metropolitan Police have a small branch that deals with supernatural crimes and when the hero, Peter Grant, discovers he can talk to ghosts, he’s the first recruit to this unit in over 100 years. Great fun and very clever and the writing really brings London alive. 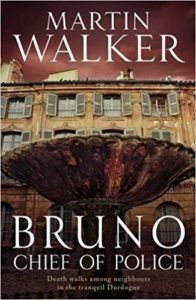 My final series for this run (there’s more to come next month) is one I’ve spoken about in a previous My Favorite Things column (French Kisses to Bruno, August 2013). So if you’d like to know more than this brief precis, please check out my earlier article. Or even better, pick up the Bruno, Chief of Police, books by Martin Walker, a British writer who lives most of the year in the gorgeous French Dordogne region which is where the books are set.

Since I wrote that piece, I fell a bit out of love with the stories because they seemed to move away from the series’ central promise of books about murder in a small community with long and very dearly held traditions that both help and hinder Bruno to solve the crimes. There were a couple of releases in the middle that were a bit too much like boys’ own adventures for me, with bombs and terrorists and worldwide conspiracies. But recently I’ve noticed the books have returned to their original charm (especially The Dying Season, published in the US as The Patriarch) and as a result, I’ve returned to being a dedicated reader. Bruno is a terrifically appealing character – a man for all seasons – and I swear you’ll be hungry when you read all the wonderful descriptions of food!

I hope some of these will tickle your fancy! Pop back next month to see the next list.