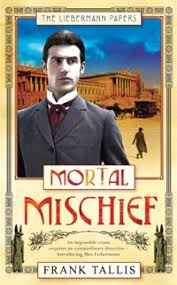 Last month, I talked about a couple of mystery series that I’m really enjoying. This month I thought I’d wrap up my recommendations with a couple of real humdingers that you’d be a mug to miss out on.

So far, I’ve only read two books in Frank Tallis’s wonderful Liebermann Papers series set in Imperial Vienna in 1902 but I’ve absolutely loved both of them. The first book, Mortal Mischief (published in the U.S. as A Death in Vienna – isn’t that a flat title in comparison?), introduces us to clever, sensitive, courageous Max Liebermann, a young psychiatrist in at the birth of the science. Max is a fabulous hero, principled and stalwart, but out of synch with his world. Vienna in this era is full of people wanting to look away from trouble, and even worse, Max is a Jew in a city where anti-Semitism is casting an increasingly long shadow. One of the fascinations of reading these books is noting trends that end up leading to the catastrophe of World War II. 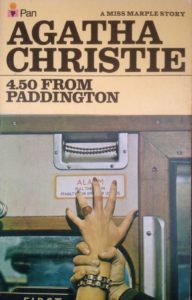 Max is good friends with police inspector Oskar Reinhardt who calls his psychiatrist friend in to help with some of the odder cases he’s investigating. Tallis does a marvelous job of creating a Byzantine, labyrinthine world that our two heroes must navigate as they seek justice. So far, really compelling reading. I’m looking forward to starting book 3, Fatal Lies, in the next few weeks.

If you’re a regular reader of My Favorite Things, you’ll know I’ve been reading a lot of the Cadfael series by Ellis Peters. I’ve only got two to go so I’m saving them for a rainy day. This has been such a lovely series, featuring a generous-hearted medieval monk from Shrewsbury Abbey as the investigator – if you haven’t read them, seek them out! If you’d like to read more about this series, here’s a link to my original piece: Calling for Cadfael. 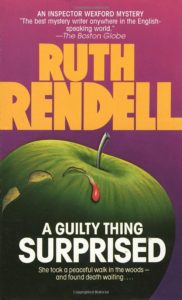 And I’ve been beavering my way through the Agatha Christies. I’ve got through 60 in the last 2 years – only 10 left to read which makes me almost as sad as having only two Cadfaels to go. I did a piece on the Christies too if you’re looking for recommendations there, although I think I was the last person in the world to read her so you’re all probably ahead of me. February 2017: Crazy for Christie.

When I was in London last year, I was lucky enough to stay in an Air BNB place that had hundreds of wonderful books for me to explore. Among those were a couple of Inspector Wexford mysteries by Ruth Rendell, who I’d never read before, although I remember really enjoying the British TV series featuring this detective. So far, I’ve got to say, the stories have been a little bit hit and miss but I’m definitely intrigued enough to want to continue to explore them.

If you like classic British crime fiction, especially if you appreciate a dark twist to your murders, these might be for you. Wexford is a great character – grumpy and almost psychically perceptive, which surprises people fooled by his lumbering countryman exterior. I’ve read 7 of these in the last 12 months and most of my GoodReads ratings have been 4 and 5 stars. I think my favorite so far is A New Lease of Death (book 2) which covers some fairly tricky psychological territory very skillfully. 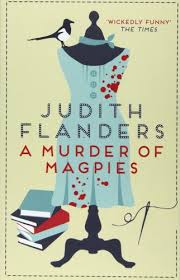 I’ll finish up with a real treat that I discovered while I was reading on my Kindle on Eigg in April last year. I knew Judith Flanders for her brilliant social history books like The Invention of Murder and Inside the Victorian House. A Kindle deal while I was away offered the first in her crime series featuring snarky editor Sam Clair. So I bought A Murder of Magpies (published in the U.S. as Writers’ Block – and again what a clodhopper of a title!) and I’ve been hooked ever since.

Did I say snarky? These books are told from the point of view of dyspeptic, acerbic, and self-aware book editor Sam Clair who keeps stumbling over dead bodies and then finding herself involved in investigating the crime. There’s a very knowing tone to these stories which I like – Sam is as conscious as we are that the scenarios are unlikely, but still she dives in and uses all her smarts and bravery to catch the murderer. In the process, she falls in love with a hunky policeman – losing her heart offers a challenge to her prevailing sarcasm that she’s pleased to surmount!

I’ve since read the next two, A Bed of Scorpions and A Cast of Vultures, and I think as Flanders settles into Sam’s voice, the stories just get better and better. Definitely worth checking out. I’m currently waiting in great impatience for the next book, A Howl of Wolves, which is out in the middle of next year.

So I hope I’ve given you some good suggestions! I’m looking forward to exploring further in these great series.