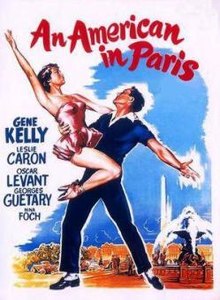 Doing this series on favorite movie musicals has been a terrifically interesting process (my other favorites so far are Singin’ in the Rain, Funny Face and The Band Wagon). The three I’ve written about haven’t lost an ounce of their charm over the years. A couple of others I’d thought about including in the series just don’t hold up to viewing as an adult – a lot of these films were childhood favorites. An old movie on a Sunday afternoon was a real treat as I was growing up! But both the world and this writer have moved on since the 1970s.

The only film I was torn about including in the series was this one, An American in Paris, which won six Oscars in 1952, including best picture. When I was about thirteen or fourteen, I think this would have counted in my half dozen favorite films – and I was a real little film buff when I was a kid, I knew pretty much every Oscar winner under the sun (or under the spotlight as the case may be). 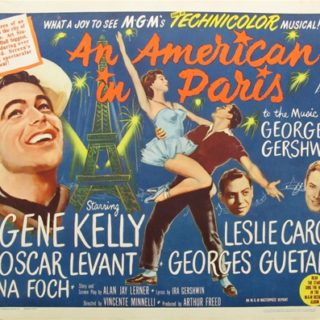 I thought (and still think) it was incredibly beautiful to look at, with its glamorous Paris settings and fantastic art direction and costumes. I loved the Gershwin score, cobbled together from George and Ira’s greatest hits (reminiscent of Funny Face, a film I covered the month before last).

Leslie Caron is lovely in her debut role. She’s sweet, charming, smart, funny and, man, can she dance. Gene Kelly, the film’s star, spotted her dancing in the Roland Petit Company in Paris and decided she’d be perfect for this role – and she is! The final ballet that goes for around 20 minutes is rightfully acknowledged as one of Hollywood’s highest achievements (I loved ballet as well as movies!).

So there are still so many things about this film that gave me enormous pleasure. And I still love it – with reservations. I might give you a bit of background before I go to the things that troubled me when I rewatched it only a few weeks ago. 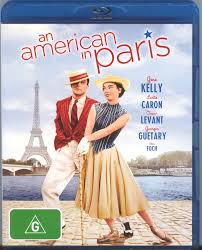 This film is another product of the Arthur Freed Unit at MGM, and it was directed by the brilliant Vincente Minnelli who also directed last month’s wonderful Band Wagon, a film I had no difficulty continuing to love, by the way. Another interesting part of writing this series is how many elements my faves shared from one to the next. Oscar Levant is in this one as cynical, perpetual scholarship-funded concert pianist Adam Cook. He was a cynical writer in The Band Wagon. Gene Kelly starred in Singin’ in the Rain. Paris was the setting for Funny Face. It all turns into a bit of a roundabout!

The screenplay by Alan Jay Lerner of My Fair Lady fame (he won an Oscar for it) tells the story of ex-GI Jerry Mulligan (Gene K) who is in Paris trying to make it as a painter. The plot is all fairly slight. Milo Roberts (Nina Foch, the female equivalent of Gig Young, who never seemed to get the girl!) is a rich American with a penchant for picking up poor artists and supporting their career in return for their company. She sees Jerry’s work, and more to the point sees Jerry, and decides to organize an exhibition for him.

In the meantime, Jerry has fallen in love at first sight with 19-year-old Lise (Leslie C) who works in a perfume shop and has a secret life that both frustrates and intrigues her American swain. So our hero is torn between self-interest and true love. 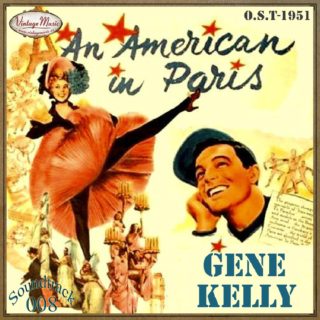 Matters are further complicated, although Jerry only finds out about this towards the end of the film, because Lise is engaged to famous French cabaret artist Henri Baurel (Georges Guetary) who is a hero of the resistance and who saved Lise’s life during the war after her parents were killed. The black moment is when Jerry discovers his true love has been stringing him along the whole time and is set to marry his good friend Henri.

At the climax, all our starstruck lovers attend the famous arts ball in Montmartre when Jerry wanders onto a balcony and starts fantasizing about his take on his relationship with Lise. Voila the famous ballet. In the end, Lise comes back to Jerry and Henri goes off to America to make a fortune on the cabaret circuit and nurse his broken heart.

The ballet really is extraordinary. I remember seeing That’s Entertainment on the big screen when I was about twelve and being completely knocked out by the glories of this piece in full technicolor with stereo sound(our TV at that stage was a small black and white). 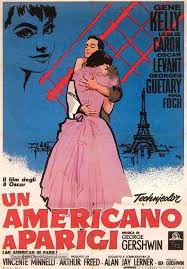 The music is gorgeous – it’s based on an original Gershwin ballet score with a really luscious love theme. Each segment is a riff on a particular painter’s work, including Toulouse-Lautrec, Dufy, Utrillo and Renoir. Sumptuous, clever, imaginative. Everything you want, really. Kelly and Caron dance beautifully together, as you’d expect. There’s an emotional depth in this dance scene that the rest of the film lacks, at least to my more mature eyes.

So now we come to the things that worried me, now I’m no longer a starry-eyed adolescent. I had real problems with Kelly’s character as written in the script. From the first, Lise is very much just a beautiful cypher to him – I didn’t believe he loved her as anything more than someone young and pretty to amuse him and keep him warm at night.

He treats Milo appallingly – he knows exactly what he’s doing as he strings her along. Once he discovers that Lise has been stringing him along in return, he reacts with self-righteous anger, but it really is the pot calling the kettle black and Lise at least has valid reasons to stick with Henri.

Basically Kelly’s character in this has the depth of a puddle. Of course he’s charming – he’s Gene Kelly. But there’s a petulant element to his personality that I can’t believe will lead to a long happy life for Lise as his wife. Yeah, I know, I feel like the Grinch. It’s such a beautiful film and I’m grizzling about it. 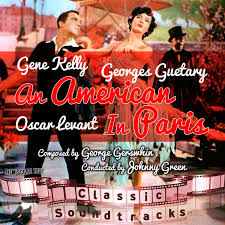 It’s a sad state of affairs when I watch a movie that’s meant to be a paean to romantic love and all I can think at the end is that the girl ended up with the wrong guy. The other characters keep saying Henri is too old for Lise (he is!) but Kelly is pushing forty in this film so he’s hardly an example of fresh-faced youth either. Henri isn’t nearly as selfish or as childish as Jerry – the final image where he drives Lise back to the ball so she can run to embrace her true love is an example of this. He’s charming, he’s talented, he’s rich, he’s kind. And hey, he’s a war hero! By the way, my favorite musical number in the film isn’t one of Gene’s (although “Our Love Is Here to Stay” is beautifully done, soft and sweet and tender). It’s a really spectacular version of “I’ll Build a Stairway to Paradise” which Henri sings at his posh nightclub.

Older, more cynical me would like to see a sequel to this classic film where a sadder but wiser Lise leaves self-centered and overbearing Jerry and goes back to the man who protected and loved her through the dark days of the war. Perhaps we could call it A Frenchman in Paris!