The Stately Homes of England – Part 4

Three stately homes to tell you about today. Well, one is actually a ruin and it was never actually meant to be a home as such, but it’s still very beautiful so I hope you won’t mind me including it.

The first is the beautiful and historic Lydiard House and Park near Swindon in Oxfordshire. I didn’t take many pictures inside, perhaps because I was so busy talking to my companion in crime on the tour. But I hope you enjoy the picture of the 16th century glass above the desk of an earlier Lady Diana Spencer who married Viscount Bolingbroke after falling in love with him at first sight in 1757. Sadly, his lordship was a dissolute fortune hunter and immersed Diana and her children in debt and scandal, including a notorious divorce. One of the things I admired about this earlier Lady Di was that when she was forced to earn a living, she did, working as a designer for various people, including Josiah Wedgwood. The scandals engulfing the family worsened in the next generation when Diana’s son, the next Viscount Bolingbroke, fell in love with his half-sister and set her up as his mistress. They had several children together. This kind of stuff is gold to a historical romance writer, as you can imagine.

Lydiard’s fields were full of black and white horses when I was there. Apparently the Traveller community bring their horses to the estate when they’re due to foal. I also had a wonderful time wandering through the beautiful gardens. The church is also worth a look if you go to Lydiard. It’s full of spectacular Tudor monuments to earlier, less scandalous residents of the house, the people who built up the family fortune so the later generations could fritter it away on wild women, riotous living and racehorses.

My next stately home is actually a folly that was never completed but it’s one of the most atmospheric places I’ve ever visited. The day my friends and I visited Rockingham Castle, we were coming home at sunset and noticed a sign to a National Trust property called Lyveden New Bield just outside Oundle in Northamptonshire. We decided to have a look and I’m so glad we did. Lyveden is full of Roman Catholic symbolism, not least the fact that it’s built in the form of a Greek cross with the Magnificat carved around the outer walls. Sir Thomas Tresham built this beautiful folly (it’s called a garden house so I suspect it was meant to function as some sort of summer pavilion) during the Elizabethan era when it was dangerous to be an outspoken Catholic. Although he inherited vast estates from his father, fines and persecution wore away at the family prosperity and he was unable to complete Lyveden before his death in 1605. Then real disaster struck the family with the next generation when Francis Tresham, Thomas’s son, was implicated in the Gunpowder Plot and sent to the Tower of London where he died of natural causes at the age of only 38. Even without knowing this history, you can feel the melancholy when you wander around Lyveden on a beautiful spring evening in the soft light. You really feel this is a place where the ghosts hover close. 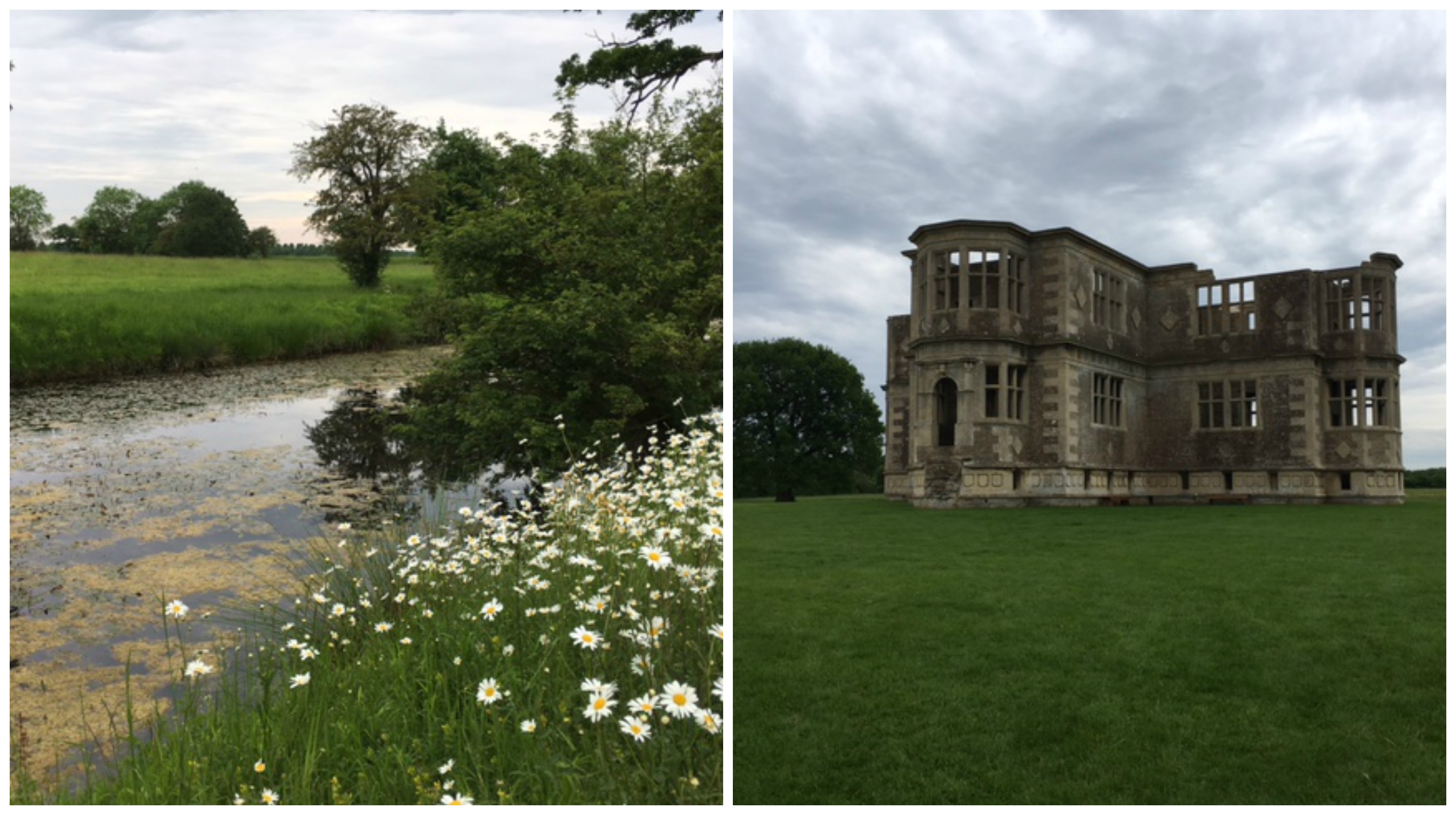 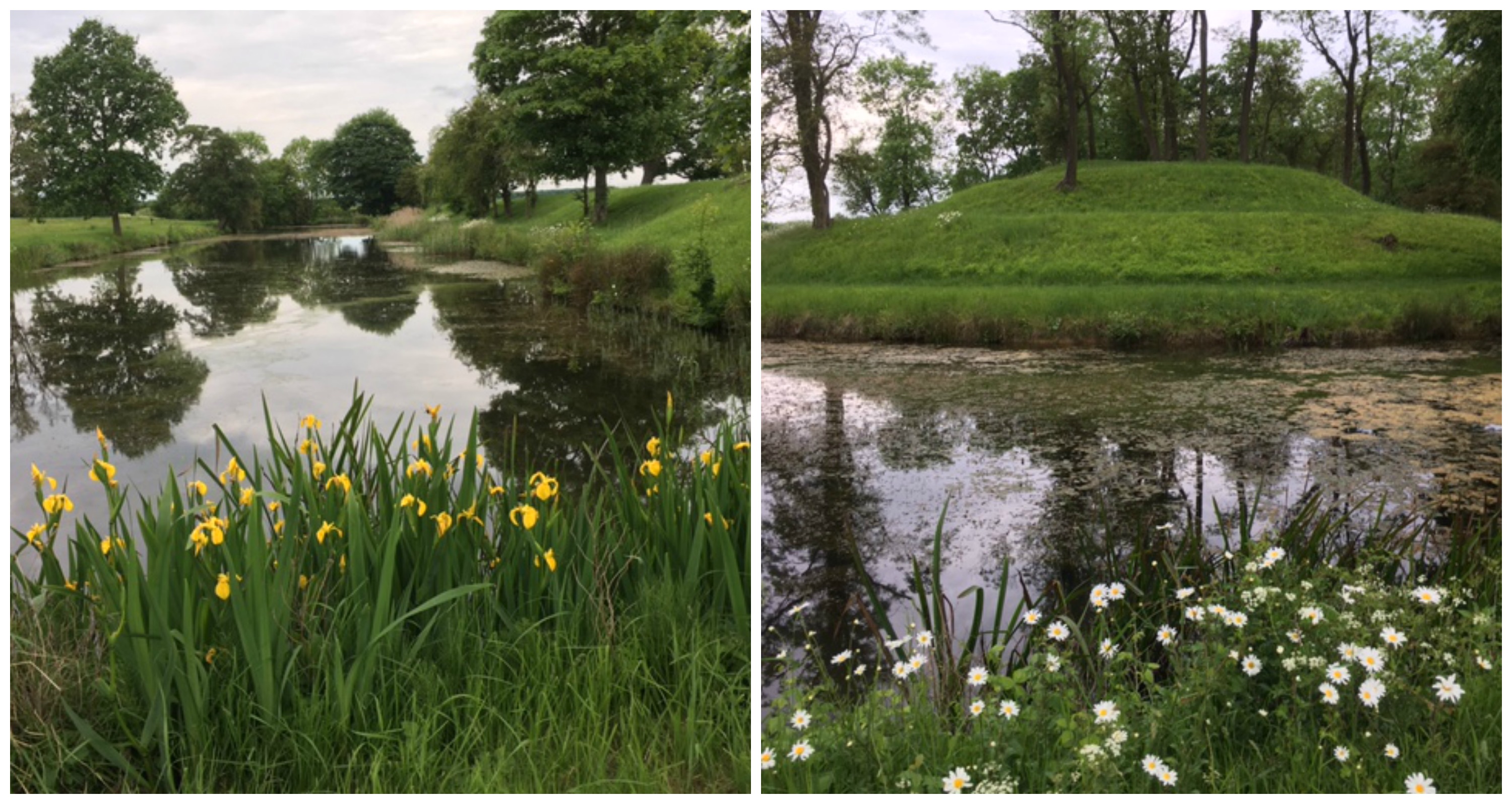 My last stately home for this month is lovely Rockingham Castle in Leicestershire. I feel so lucky I got to see this treasure house of history because it’s only open a few days a year. Parts of this spectacular building go back to the original castle, built on the orders of William the Conqueror in the 11th century. In the Tudor era, Elizabeth I (she’s popping up a bit today!) gave the estate to her favorite Edward Watson. Edward’s descendants still live in the house today so it has a delightfully family feel when you visit. In the English Civil War, the castle was besieged but not taken, although defending the castle cost the family most of its fortune.

For literary types like me, one of the most fascinating things about the castle is that Charles Dickens was a frequent visitor in the Victorian era. He wrote and performed in amateur theatricals with the family in the elegant long gallery – the day we visited, they had a pianist playing the grand piano there which added a delightful touch. There are numerous Dickens keepsakes and he used it as the inspiration for Chesney Wold in Bleak House (which I haven’t read so that didn’t mean terribly much to me. I’m assuming as it’s not called Bleak House, it must be a nicer place). The gardens as you’ll see in the pictures are spectacular!

Swing back next week for the last in this short series on the historic homes I visited while I was in England earlier this year. I’ve saved the best for last – beautiful Stowe in Buckinghamshire which is dream England. Don’t miss it!