Hopping Over to Heide 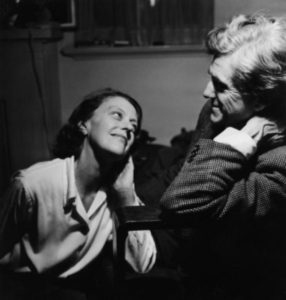 While Australia has always produced world-class singers (if you want to read about an exciting life, check out Nellie Melba, the superstar soprano at the turn of the last century – Brad and Angelina had nothing on her when it came to worldwide celebrity), the first art form to gather us major international attention was painting. When artists like Sidney Nolan and Russell Drysdale hit the London, and later New York art market after World War II, people really sat up and paid attention. Partly because what we were producing down here was so different and powerful.

Many of the most talented Australian artists of the 1930s, 1940s and 1950s were associated with John and Sunday Reed, a rich young couple who set up home and an artists’ colony at Heide, an abandoned dairy farm near Melbourne in Victoria. Now Heide (pronounced Heidi, like the little Swiss girl from the book) is a major museum, featuring the original Victorian cottage from the farm, the 1960s Modernist house where the Reeds lived, and a purpose-built museum to showcase Australian art and international artists who had a powerful local influence. Apart from Nolan, artists with strong links to Heide (and who experienced life-changing events there) include Arthur Boyd, Albert Tucker, Joy Hester, John Perceval, Danila Vassilieff, and Charles Blackman.

The Reeds were an incredibly interesting pair – there’s a lot of information out there about the various romantic entanglements they had with the artists who visited Heide – yet it’s perfectly clear when you’re there and you read about them that they shared a deep and abiding love. Isn’t that a lovely photo of both of them in later life?

As you’ve probably gathered, I’ve long wanted to visit Heide, and on my most recent trip to Melbourne in September, I finally made it. I’d always imagined it was a long way out of town but in fact, it’s only about 20 minutes’ drive from the city. It was a rainy day so I got lots of moody shots of the magnificent garden dripping with moisture. Sadly the weather made seeing the sculpture park out of the question but I had a wonderful look around the rest of the spaces.

In the main museum, there was an exhibition of Russian Constructivism and its offshoots – in the 1920s and 1930s Soviet art had a strong influence on the Australian art world. To idealistic, left-leaning artists down here, it seemed that the world had been turned upside down for its own good. I wasn’t familiar with a lot of the artists but it’s striking work, with striking use of perspective and elements like collage and found objects. I particularly liked the work of George Johnson, a New Zealand artist who mainly worked in Australia, and this gold wood panel called “Pentagram” by Erich Buchholz (1921). The three abstracts are George Johnsons – I love the clean shapes and colors.

I’m vaguely researching a 1920s story at the moment, so the Russian exhibition was right up my alley.

The next stop was the magnificent Modernist house that the Reeds built in 1964, designed by David McGlashan. They wanted “a gallery to be lived in,” and that’s just what they got. In Heide 2, I particularly loved this Barbara Hepworth sculpture called “Orpheus,” with its strings to symbolize the tragic musician and his lyre. You can see behind it the polished sandstone walls that form the house.

Last stop was the old Victorian farmhouse where Sidney Nolan painted his iconic Ned Kelly series, still probably the most recognizable images in Australian art. It was amazing wandering around this small house and imagining all those titanic talents (and egos!) fighting for space, and in the process creating modern Australian art. It’s blossom time in Melbourne and I took these lovely pictures in the pretty orchard surrounding the house.

I’m hoping to get back to Melbourne more often (it’s a few years since I visited) so hope to put Heide on my regular visiting list. If you’re down that way and you like art, it’s well worth a visit (and the cafe is pretty nice too!). Here’s a link to the website: https://www.heide.com.au/