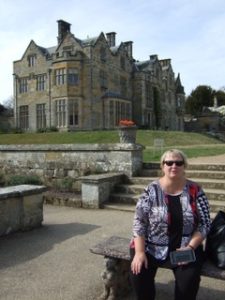 The Stately Homes of England – Part 2

Today, I’d like to talk about one of most romantic places I’ve ever been, Scotney Castle in Kent.

On the most perfect day, back in March 2017, I visited this gorgeous National Trust property with a good friend I hadn’t seen in 10 years. Look at the pictures of the blossom and the daffodils!

Scotney is nestled in a beautiful valley that is a perfect example of classic English countryside. Rolling hills and extensive green fields. There are actually two houses on the estate. The oldest and most picturesque is 14th-century Old Scotney Castle down in the base of the valley. A half-ruined tower and moated manor house.

The other building is the very attractive New Scotney Castle at the top of the hill which was built between 1835 and 1843. Actually I suspect in winter, the old house is very damp and cold, so while my romantic heart mourns that the family stopped living there, my practical self completely understands the desire for something newer and more modern.

My friend and I had plans to see another National Trust property that day, Rudyard Kipling’s home Bateman’s which is nearby. But the charms of Scotney were so powerful that we didn’t move on until closing time. We had a wonderful time wandering around both houses and did a wonderful three-hour guided walk around the estate – all up and down hills so my knees weren’t nearly as enthusiastic as I was, but definitely worth the effort. As with many National Trust properties, the estate is still run as a going concern, so looking out across fields and coppices and seeing the peacefully grazing sheep and cattle, it was easy to imagine what life must have been like for the prosperous landowners of this beautiful corner of England down through the ages.

I wish I could tell you that this beautiful place played a major role in English history but I think it’s always been a hidden little piece of paradise. There’s a story about a Jesuit priest escaping Elizabeth I’s Catholic hunters by jumping over a wall down in the Old House. Prime Minister Margaret Thatcher rented a studio apartment there for a while when she ran the country. And that’s about it. Perhaps that’s exactly why the atmosphere here is so extraordinarily dreamy and peaceful.

I hope these pictures convey something of that extraordinary tranquility and beauty. If you’re in Kent when Scotney Castle is open, don’t miss it.