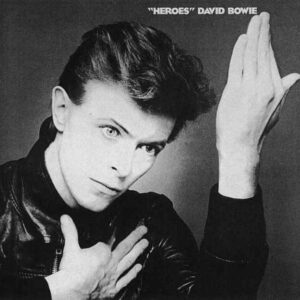 I, like so many people in the world, was terrifically saddened – and shocked – to hear of the death of creative dynamo David Bowie on 10th January this year (it was a bad week – Alan Rickman and Glenn Frey both died around the same time).

I was getting together some dinner and I had the TV on in the background on our public station here in Australia, the ABC. At first, I thought I’d misheard when the newsreader announced Bowie’s death. Then I thought it was a hoax. He was only 69, after all, and I hadn’t heard anything about him being ill. And somehow you just think your cultural icons will always be there with the next great piece of work or insight into the way this crazy world trundles along.

No hoax. No mishearing. David Bowie has left us. And the world is immeasurably poorer as a result.

I’ve loved his music since I was a preteen. I remember coming across “Space Oddity” when I was about ten or eleven and sitting up in amazement, thinking I’d never heard anything like it before. It had a depth and an irony and a subtext lacking from so much popular music in the 70s. This singer had a really interesting mind. My opinion never changed! Every step he took challenged and intrigued – even when he went pop in the 1980s, it was GREAT pop. 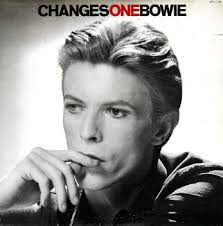 One of the very first rock albums I ever bought was Changes One, a greatest hits collection where every song is a winner. I can remember sitting in front of my secondhand record player in my bedroom and loving how the voices bounced back and forth on “Changes.” And the unforgettable riffs on “Jean Genie” and “Diamond Dogs” and “Ziggy Stardust.”

This was music I could hear over and over again without tiring of its endless invention. Just the sight of that moody black and white cover, showcasing his eerie differently colored eyes is enough to take me right back to my very nerdy teenage self.

I remember the first time I heard “Heroes,” which I still think vies for a place as the greatest pop song ever written. The doomed romanticism of the two lovers in Soviet-era Berlin still breaks my heart and that wall of sound accompaniment with its basso ostinato of falling notes creates a soundscape unlike anything else.

I was a very unhappy student at boarding school and I was watching the weekly rock show Countdown, one of the few TV programs we actually got to see – I think because the teachers knew they’d have a riot on their hands if they tried to ban it. All the other girls just loathed the no-frills video with a skeletal Bowie in black leather backlit by a bright spotlight. They weren’t much keener on the long, complex song with its dark message. But I was in love with it from the moment I heard it. 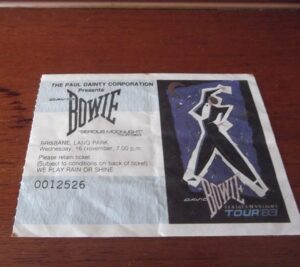 In my early 20s, I was absolutely obsessed with his tenth studio album, Station to Station, released in 1976. I can remember sitting up late into the night playing it over and over again. The return of the Thin White Duke was just right for me at the time – again, more doomed romanticism including the all-time classic “Golden Years” with its echoes of Marilyn Monroe and loss and displacement. It’s still one of my favorite albums.

This was the era when Bowie went as mainstream as he got – what I was listening to in the 1980s was several years old at the time – with the mega hit Let’s Dance. Another album I played to death, much to the regret of my classical-music loving housemate at the time.

I was lucky enough to see David Bowie live when he came to Australia on the Serious Moonlight tour. A highlight of my life. Lang Park, Brisbane’s football stadium, was packed to the gills, but his charisma crossed the footlights and reached right across the field. I still remember him starting “Heroes” with “Lavender’s Blue, Lavender’s Green” and how moving that was. And an unforgettable rendition of “Life on Mars.” Around that stage, I started exploring his earlier work from classic albums like Hunky Dory and The Man Who Sold the World. I’m still in awe at the variety and quality of music he produced during his lifetime.

Like many people, I lost contact a bit with his newer stuff, although I had a fellow Bowie-loving friend when I worked as a captioner for the Deaf in Sydney and he lent me most of the albums as they appeared (this is back in pre-iTunes days). I must say, my heart still belonged with Bowie’s mid-period, however much I loved his other stuff. I’m going to make an effort now to catch up on the work I missed out on while I was off doing other things and imagining that David Bowie would always be there to delight me. 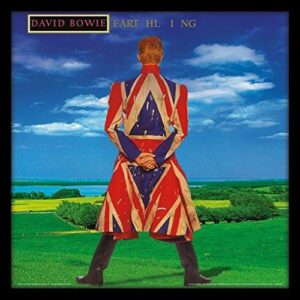 There are so many things I admire about David Bowie, aside from his prodigious artistic output. I admire that he never just settled, but kept confronting the challenge of the new. He took artistic risks right to the end. I love that he incorporated so many different artforms into his music so that his work has a depth and resonance unrivaled in most popular music. I love that when I hear a David Bowie track, even from back in the 1970s, it could have been written yesterday. His work is timeless and yet at the same time it speaks so strongly of its era. I love that he was brave enough to confront stereotypes of gender and image. I love that he made art out of his alienation and managed to bring so many of us into his world as a result. I love that he released his last album days before he died and then left us with breathtaking dignity. In a world where people seem to want to share EVERYTHING, that was the final glorious touch on a life that touched so many of us so very deeply.

Thank you, Mr. Bowie. You’re a star of a Starman.