It’s time for part two of my stroll down Bird Memory Lane. This month I’m putting in the birds that are NOT just black and white. 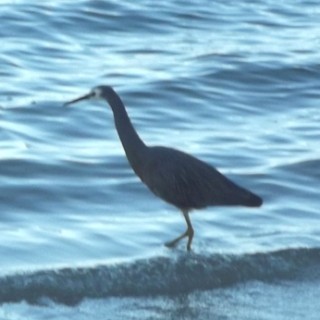 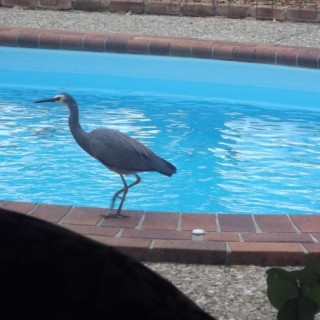 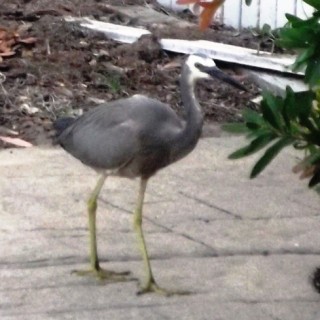 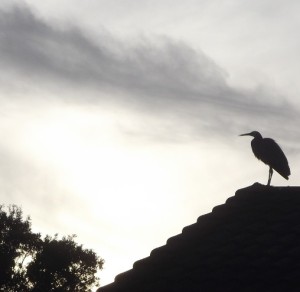 I’ll start with one of my local favorites, the white-faced heron. They’re quite a large bird (the boys are bigger than the girls), probably around two feet tall. They’re so graceful, they’re like ballet dancers. When they’re wading through the water, they hardly make a ripple, their movements are so smooth. They’re beautiful fliers too. With all this elegance, you think they’d have a really pretty call but they sound like a door that needs some WD40!

This rainbow bee-eater flew into my office window. He’s a close relative of the local blue kingfisher, another spectacular bird, but one I haven’t managed to get a photo of. The colors on his feathers were quite iridescent. Gorgeous. While he’s a rare visitor to my house, I’ve seen him quite often up in the mangroves edging Pumicestone Passage about ten minutes walk away. 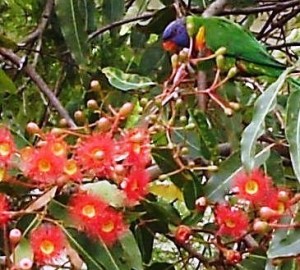 These guys are the clowns in my garden. Rainbow lorikeets are noisy and quarrelsome and inclined to overdo the fermented nectar. As a friend of mine from England once described them, they look like flying stained glass windows. The colors really are astonishing. By the way, that’s my flowering gum tree. Sadly all the rain in the last couple of years meant that it faded away and died. But wasn’t it lovely in its heyday? There’s another really pretty parrot in the area, the pale-headed rosella, but they’re too shy to stay still for me to whip out the camera and catch them. Here’s a link.

As you can see, we’re spoiled for choice here when it comes to spectacular parrots. I love the pink and gray tuxedo on the local galahs who are very common in the area. The white birds are corellas who are almost as noisy as the lorikeets and come around in huge numbers for a couple of months a year. I love the black cockatoos – their appearance is generally a sign of rain. I love their call. The spectacular green and red parrots are a very occasional visitor to my house, but I cheated and took the photo of these two king parrots at Australia Zoo which isn’t far away. 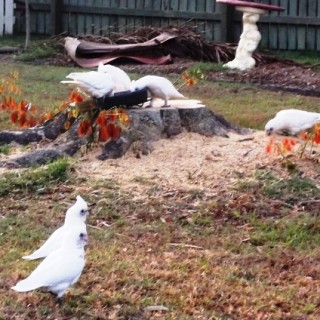 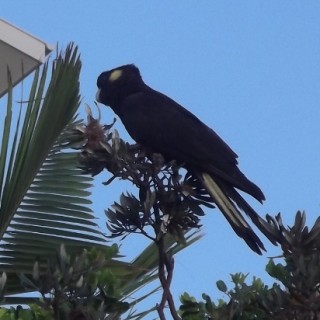 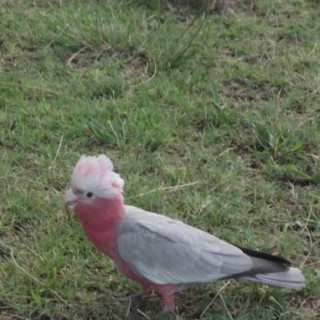 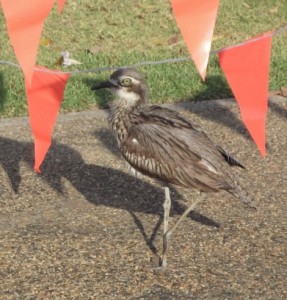 I’ll finish up with the bush stone curlew, which has the most unearthly call. We don’t actually get them where I live now, although they were very common on the farm when I grew up. On a still night, that eerie cry sends shivers down your spine – it sounds like lost souls wailing for blood! Here’s the call. I snapped this handsome fellow at the City Botanic Gardens in Brisbane. He stood completely still no matter how close I came. Clearly he was convinced that bit of bunting hid him from view!