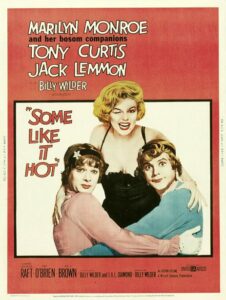 It’s always a treat when you accidentally come across a favorite film as you’re channel surfing – and it’s a movie you haven’t seen in forever and you’d forgotten quite how wonderful it is. That happened to me on a recent Sunday afternoon when I was noodling my way through the pay TV channels and I came across Some Like it Hot, just started. I was lucky enough to have time and leisure to settle down and watch it – and I was enchanted anew.

Some Like it Hot was released in 1959. It was directed by Billy Wilder, and Wilder and his long-term collaborator I.A.L. Diamond wrote the sparkling screenplay. There’s a great cast – Marilyn Monroe plays Sugar Kane Kowalczyk, the singer in an all-girl band in the 1920s; Tony Curtis plays Joe, her love interest; Jack Lemmon is absolutely brilliant as Jerry, Joe’s best friend; George Raft is a gangster (what else?); Pat O’Brien is a detective; and Joe E. Brown is brilliant as eccentric millionaire Osgood Fielding III.

The plot is pretty high concept. Broke musicians in Prohibition era Chicago witness a gangland massacre and flee to Florida disguised as women in an all-girl band. There everything gets farcical. Joe falls in love with Sugar (although love isn’t exactly on his mind when he sets out to seduce her in the guise of a Cary Grant soundalike millionaire). This relationship is complicated by the fact that his female alter-ego Josephine is Sugar’s confidante. Lonely millionaire Osgood romances Jerry/Daphne. Then to make things worse, the gangsters who are after them turn up for a convention. As in all the best farces, chaos ensues.

What’s really impressive about this is that amongst all this craziness, the characters manage to seem real with real emotions. Monroe, although apparently a nightmare on the set, was never lovelier and you really ache for her when she falls in love with Joe in his ‘millionaire’ guise. Joe is a selfish guy who ends up finding redemption through love, much against his own inclinations. That’s a familiar type from Regency romance! He’s hilarious when he pretends to be Cary Grant – there are so many clever lines in this movie, but one of my favorites is when he says he drowned two ponies under him playing water polo (maybe you have to see the whole thing to get it!). Jack Lemmon is fantastic with his quick delivery and whingeing and refusal to confront the reason why marrying Osgood is going to cause problems. To give you an example: 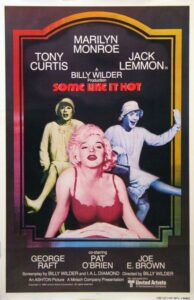 Joe: There’s another problem
Jerry: Like what?
Joe: Like, what are you gonna do on your honeymoon?
Jerry: We’ve been discussing that. He wants to go to the Riviera but I kinda lean towards Niagara Falls.

Joe E. Brown nearly steals the show. He and Daphne tangoing through the night is a sight to behold and he has one of the greatest last lines in a film ever (I won’t spoil it if you haven’t seen it).

This film is such fun. It’s witty and ironic and romantic and just a good time to be had by all (except perhaps by the massacre victims). If you haven’t seen it, I highly recommend it. It has to be one of the greatest comedies ever made.