This post was inspired by a piece my friend Annie West did about her zany kitchen kitsch. I thought to myself, “I have zany kitsch!” Well, maybe not that zany. And honestly, I think most of it falls into the truly decorative rather than kitsch category. So maybe I’m having myself on. 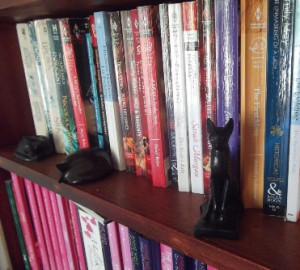 I just looked ‘kitsch’ up in Webster’s and they say, “something that appeals to popular or lowbrow taste and is often of poor quality.” That’s definitely not true about my four cat knick-knacks I want to talk about today.

When I lived in London for two years in my mid-20s, I came home with presents for everyone except me. I decided then and there that I’d buy something to keep as a memento of every overseas trip that followed. Many of these mementos (as well as other lovely bits and pieces I’ve collected over the years) have ended up decorating my office. They’re very inspiring!

I thought today I’d talk about four of my favorites which happen to be cat ornaments. 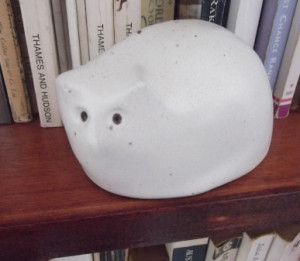 The first is something I did manage to keep from that first overseas trip – by default. I’d bought it as a present for a friend and then over the two years, we completely lost touch. By the time I’d got home, I’d also fallen in love with the Catalan cat from Tarragona in northern Spain. It’s a little abstract, it’s a little lumpy, but there’s something very pleasing about its mottled white glaze and the way it stares back at me from its black button eyes.

My second cat is a neat little black resin copy of an ancient Egyptian statue of Bastet, a protector goddess. I love the faint gold collar on this and it’s so elegant and spare. I bought it on my first trip to the Metropolitan Museum of Art in New York in 2006. I’d wanted to go to the Met since I read and re- read From The Mixed Up Files of Mrs Basi E Frankweiler in primary school. So far, I haven’t done the Met justice, but the Bastet statue is a promise that one day I’ll go back and take the time to see the collection properly. 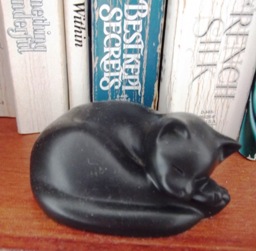 My third cat comes from my lovely four months of wandering the United Kingdom in 2004 when, unbeknownst to me, I was location spotting for future books! It’s made out of Welsh slate and I bought it in a tiny gift shop at the mouth of Cheddar Gorge in Somerset. It’s so beautifully tactile and it sits in the palm of my hand and I love the sleeping face on the cat. Definitely a treasure. 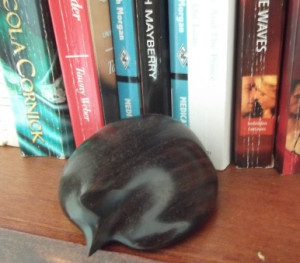 My final cat was a gift from my oldest friend a couple of years ago when she did a U.K. trip of her own. Oddly enough, it’s very similar to my Welsh slate cat, if slightly more abstract in design. Again, it’s a cat curled up asleep and of a size to fit perfectly (purr-fectly?) in the palm of my hand. It’s made of some beautiful streaky hardwood that warms when you hold it. Another treasure.

Hmm, this trip down memory lane has been fun. I might revisit some more of my bibelots next month!