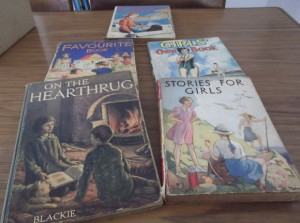 Blast From the Past

I’m currently cleaning out many years of family history as I’m in the process of preparing my house for sale at the end of the year. It’s amazing what you turn up when you go through those dusty boxes at the back of the storeroom!

Among the treasures was a box full of my mother’s childhood books. I thought you’d enjoy seeing these beauties from the 1930s. The Girls’ Own Book was one of mine from the 60s so it’s a bit of a ring-in! 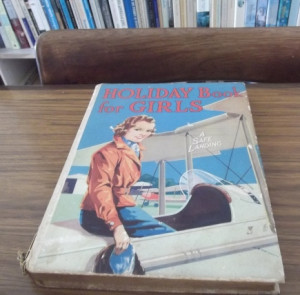 My mother’s parents were hard-up Danish dairy farmers in the Burnett Valley in Queensland and she was the second-youngest of six children, four girls and two boys. As a child she had rheumatic fever which sadly affected her health for the rest of her life-and that meant she missed a lot of school. So you’ll know how impressive it is when I tell you that my mother won all these books as academic prizes in primary school.

The oldest book is On The Hearthrug which my mother received in 1936 (the beautiful copper writing plates inside each book are great pieces of history in their own right!). The newest one is The Holiday Book for Girls which she received in 1940. Just look at those covers! Don’t they take you back to that pre-war era? 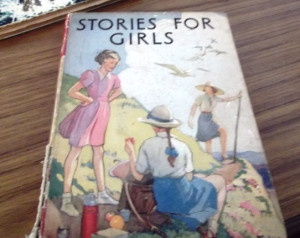 Something these books show is quite how English Australian culture was back then. That lasted at least up until when I learned to read in the mid-60s. I remember Dick and Dora who wore socks and sandals to the beach. To an Aussie, that seemed just stupid! I suspect the English influence was even stronger back in the 1930s. 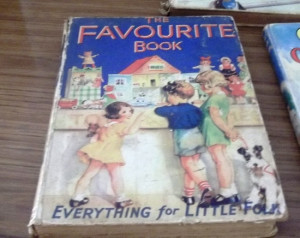 While I hadn’t looked at these books in decades, they brought back lovely memories for me too. I remember finding them in the junk cupboard under the house when I was in primary school and loving the stories. This, for example, was the first time I’d read the King Arthur stories and I just devoured them.

I’ve rescued these priceless relics (priceless at least for me!) and they now sit proudly on one of the inside bookcases. A place of honor indeed!