Garbo Laughed – and So Do I! 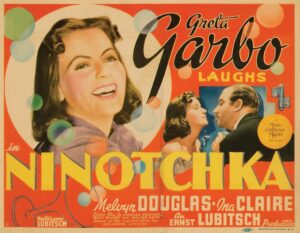 Recently I was channel surfing and I came across Ninotchka, a favorite film that I haven’t watched for ages. I’d missed the first few minutes but I’ve seen this movie so often, that hardly mattered, and I stayed with it until the end so I got all the romance plot. And as you can imagine, that’s my favorite bit!

1939 was a miraculous year in film history. The Oscars, and frankly the box office, were dominated by the classic Gone With The Wind. But other all-time favorites from that year include The Wizard of Oz; Goodbye Mr Chips, probably due for a favorite things column of its own; Love Story, the original An Affair to Remember; and William Wyler’s Wuthering Heights.
One of the best of the releases of 1939 is Ninotchka, the film famously blurbed as “Garbo laughs.”

I’ve long been a Greta Garbo fan. I think she’s beautiful but in a rather strange way – her face is very sculptural and I particularly like the way her eyes and eyelids seem to be carved, the shape is so sharply defined. It’s an interesting, individual kind of beauty. 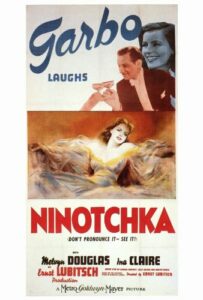 Something that surprised me when I read her bio on IMDB is that she was only 5′ 7″. Her presence on screen is so powerful, I’d always imagined her as approaching six feet!

Garbo hit Hollywood from her native Sweden at the age of 20 in 1925 and ruled as the queen of a particular type of passionate, melodramatic silent film.

She was among the stars who survived the change to talkies – where she made more passionate melodramas usually with a weepy ending. I know, I’ve seen most of them! In all these dramatic, unashamedly romantic films, she was luminously beautiful – she could hardly be anything else – but happily ever afters were very thin on the ground.

By 1939, these intense films were going out of style so MGM took a chance by putting Garbo in a comedy. Ninotchka plays sly games with Garbo’s serious, reclusive reputation and it’s an absolute delight. She shows real flair as a comedienne.

Sadly she only made one more film, Two-Faced Woman, which is no masterpiece if not nearly the disaster it’s usually called. But I think Garbo recognized the writing was on the wall. The complex, European-style movies that had made her reputation had had their day and by 1941, while she was still gorgeous, it was clear that her beauty wouldn’t last forever. Perhaps it would be best to leave while her legend was still intact. Leave them wanting more, in fact. 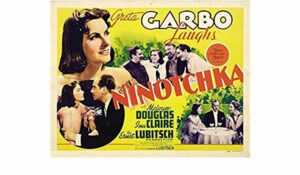 She went on to live a very quiet life (although it’s clear she was never completely alone as the legend would have you believe) and make a fortune in the New York property market. She was a smart cookie, was Miss Greta!

One of the loveliest films she left us as a reminder of her radiant screen presence is Ninotchka. Ernst Lubitsch was another wonderful European addition to Hollywood (if you can get hold of his version of The Merry Widow, it’s a treasure!). He was famous for lighter than air comedy with a piquant ironic edge that definitely enriches Ninotchka. Billy Wilder and Charles Brackett wrote the witty screenplay and William H. Daniels filmed the story in glorious black and white.

Even better, this film is as breathtakingly romantic as anything Garbo did in her weepy heyday! When stern commissar Nina Ivanovna arrives in France from Stalinist Russia to oversee the sale of Grand Duchess Swana’s jewels, she’s no match for the charms of Paris. Or the charms of the Grand Duchess’s boyfriend Leon who sets out to seduce her into abandoning her mission.

Leon, played beautifully by Melvin Douglas, goes through his own transformation as he finds himself falling head over heels with the last woman he ever imagined losing his heart to. One of the nicest things about this film is that both Leon and Ninotchka learn and grow through their love affair until at the end, they’re much better, more fulfilled people. That’s a perfect romance arc! 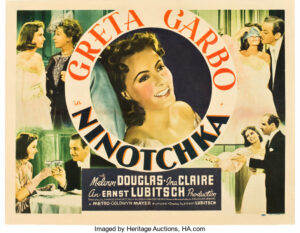 The supporting cast is perfectly chosen and get some of the best lines. There’s a memorable scene, for example, where the perpetually cash-strapped Leon, Count d’Algout, asks his butler if he wants to be his equal and Gaston (Richard Carle) reacts with horror at the idea of sharing his substantial nest egg with the impoverished count. Or this lovely exchange at the railway station in Paris where Ninotchka refuses to give her bags to a porter:

Ninotchka: Why should you carry other people’s bags?
Porter: Well, that’s my business, Madame.
Ninotchka: That’s no business. That’s social injustice.
Porter: That depends on the tip.

See what I mean about the sly humor?

Other standouts in the cast are the three rascally commissars originally entrusted with the sale of the jewels. Iranoff (Sig Ruman), Kopalski (Alexander Granach) and Buljanoff (Felix Bressart) are real charmers – a bit like fairy godmothers to Ninotchka and Leon.

I could go on for pages about the glories of this film. But I think your time would be better spent hunting it down and watching it. It’s a real treasure!