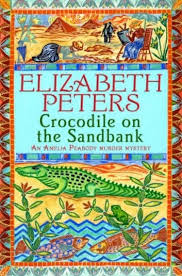 I was deeply saddened last August to read of the death of the wonderful, versatile author who wrote as Barbara Mertz, Barbara Michaels and Elizabeth Peters. I thought as a tribute, I’d talk this month about one of my favorite series of all time, the Amelia Peabody mysteries which MPM wrote in her Elizabeth Peters incarnation.

I’ve always had a very soft spot for books set in 19th century Egypt. Two of my all-time favorite romances are As You Desire by Connie Brockway and Mr Impossible by Loretta Chase.

So the Amelia Peabody series about archaeologists at the turn of the 20th century is right up my alley. I strongly recommend you read the books in order, starting with the hugely enjoyable and very romantic (despite all the hijinks and intrigue) Crocodile on the Sandbank.

(I am informed, by the self-appointed Critic who reads over my shoulder as I write, that I have already committed an error. If those seemingly simple English words do indeed imply that which I am told they imply to the vulgar, I must in justice to Evelyn find other phrasing.)

In justice to myself, however, I must insist that Evelyn was doing precisely what I have said she was doing, but with no ulterior purpose in mind. Indeed, the poor girl had no purpose and no means of carrying it out if she had. Our meeting was fortuitous, but fortunate. I had, as I have always had, purpose enough for two. 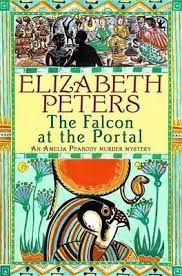 You immediately know that you’re reading a book written in the high Victorian style (“Reader, I married him!”). You can also tell that you’re in for a lot of fun – and that’s true as well. One of the great pleasures of this book is the sly humor.

“Purpose enough for two” describes bluestocking spinster Amelia Peabody to a T. She’s a lovable monster who inherits a fortune from her vicar father and sets out to see the world on her own terms. She’s self-willed, self-confident, pushy, but kind-hearted, generous and often perceptive.

When she crosses swords with shaggy, cranky archaeologist Radcliffe Emerson who until now has only been interested in women after they’ve been dead for 3,000 years, unexpected sparks fly. It’s a joy watching these two clever people maneuver around each other, only to find themselves maneuvered into a lifelong passion.

While Emerson and Peabody discoverthat they’re made for each other, there are dead bodies galore. Some of these dead bodies are meant to be that way – mummies feature strongly – but some aren’t. Amelia and Emerson play amateur sleuths in between their digging. “Every year, another dead body” as their overseer Abdullah puts it. 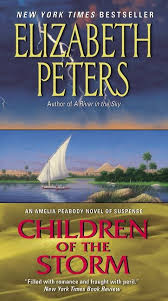 Amelia and Emerson have one son, the dashing, mysterious and charismatic Ramses who becomes the swashbuckling hero of later books. Ramses’s path to true love is littered with drama and heartache, and by the time he gets his happy ending in The Falcon At the Portal, the reader (and Ramses) have been through the wringer. Great stuff!

Another joy is the huge cast of characters who swing in and out of the stories. Eccentric scholars, master criminals, young lovers, Egyptians, uppity servants, spies, suffragettes, rotters, real people like Howard Carter and Lawrence of Arabia. Not to mention cats who are characters in their own right. You’re never quite sure what you’re going to get in an Amelia Peabody novel, apart from rollicking enjoyment, a great story and a plethora of corpses.

The tone is dry and witty. Surprisingly the humor doesn’t jar with the dramatic or tragic elements. There’s Bronte-esque melodrama and Austenish irony and Dickensian universality, yet somehow the books emerge all of a piece. As a writer, I’m in awe every time I read one. 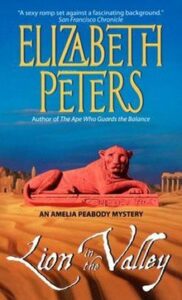 If you haven’t read Amelia Peabody, I highly recommend her. If you have, I’m sure I’m speaking to the converted. If possible, read the books in order. Many of the plot strands about the family run from book to book, with revelations timed for maximum effect. Just this weekend, I finished number 15, Children of the Storm – clearly I need to eke out the last books.

Vale, Elizabeth Peters, and thank you for hours of brilliant entertainment.