Earlier this year, I was hunting out some photographs to illustrate a guest blog for someone who was coming onto the Romance Bandits site where I’m a regular. The author, Jennifer St. George, had written a book inspired by Venice. And as I dug around in my photo albums, I found myself equally inspired!

The Doge’s Palace with the Grand Canal

I’ve actually been to Venice twice, once in 1985 and then again in 1995 (and I’d love to go again!) so I went looking for my snapshots. Sadly the 1985 pictures were all infected with old photo pink, but the 1995 photos proved surprisingly attractive.

So here I was with one of my favorite places in the forefront of my consciousness and a whole stack of photos. It seemed like an ideal opportunity for a My Favorite Things piece or two! I thought I’d talk about Venice itself this month and around and about Venice next month. 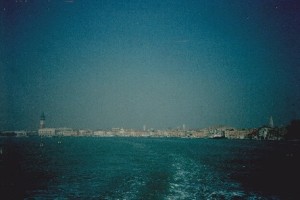 Venice in the morning

On my first visit to Venice in 1985, I was travelling with my best friend in a hire car. Taking the advice of budget-conscious experts, we stayed in Padova/Padua and took the train in every day for a week or so. It’s about an hour’s journey. 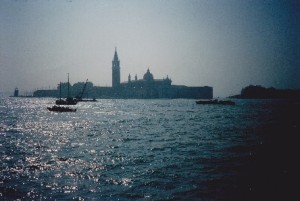 The mouth of the Grand Canal

Much against my expectations (I had been led to expect something dirty and decrepit and overrun with tourists), I fell immediately in love with this city that’s unlike anywhere else in the world. Everybody told me it was smelly and rundown and crowded. And yeah, that’s true. But it’s also gorgeous and historical and atmospheric, like a beautiful old woman who still retains traces of her youthful glory and is somehow more beautiful for a few wrinkles and a bit of a sag here and there. 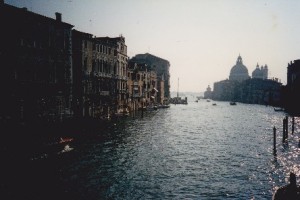 My friend and I used to get into Venice really early then leave really late. Which meant we could wander those gorgeous streets for hours when they were virtually empty. This first visit was early in the spring and even at the height of the day, it was still possible to get around. After about 3pm, all the coach tours left and the city returned to its La Serenissima self. 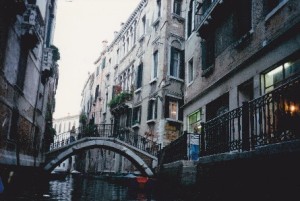 What struck me that first time, apart from how glorious Venice was, was how traffic noise is a constant in our daily life in most places we go. Because there are no cars, Venice at night, apart from the occasional sound of a boat along a canal and human noises like laughter or conversation, is really quiet. The lap of water. Distant music. The whisper of a breeze. I still remember how enchanted I was at the magical silence. 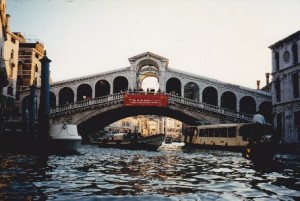 The famous Rialto Bridge on the Grand Canal

In 1995, I was determined to stay in Venice, no matter what it cost me. This old lady charges like a wounded bull, I have to tell you. I was in a lovely hotel just off the Grand Canal and this second visit, I fell in love all over again. Although the crowds were much worse this time around! We were there in late September, but apparently there really isn’t a quiet time in Venice anymore. Clearly I’m not alone in my love affair with the place. 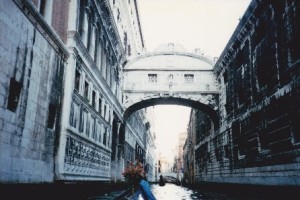 The even more famous Bridge of Sighs

A lot of these photos were taken on a couple of ferry rides up and down the Grand Canal on the number 1 vaporetto. It’s a great value way to see a huge amount of the city and it’s got the advantage of saving you from millions of coach parties! 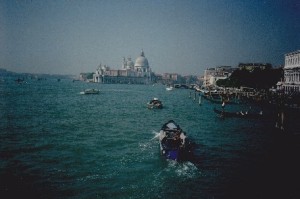 Favorite experiences from this trip included a Vivaldi concert in the Scuola Grande di San Rocco where we were surrounded by magnificent Tintorettos, a trip to the cemetery island which was so beautiful and peaceful, and a night sitting with a hot chocolate in St. Mark’s Square, listening to the orchestra play the music my grandmother used to have in her record collection. Worth every scent of the $20-odd the drink cost!