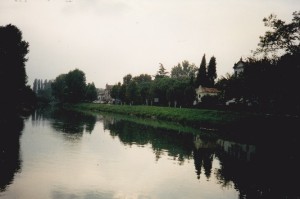 Floating along the Brenta Canal 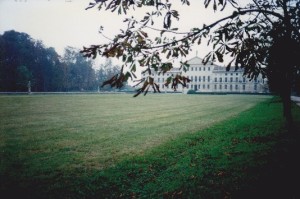 The Villa Pisani on a foggy afternoon 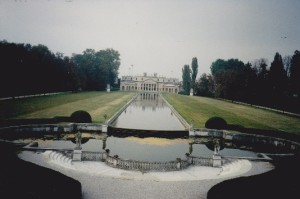 The Villa Pisani – either the architect or the photographer was drunk! 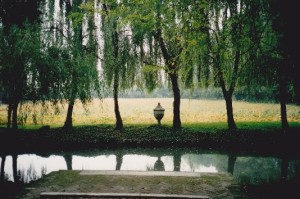 Reflections along the Brenta Canal 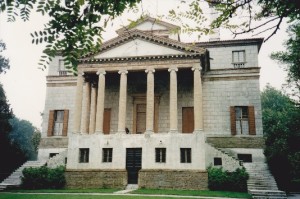 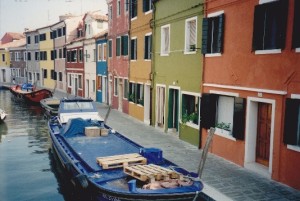 The island of Burano, famous for its lace 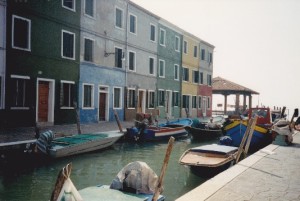 The island of Burano

Did you see the post I did last month about hanging around Venice and making eyes at the gondoliers?  Well, this month I’m talking about things I did around Venice. As I said last month, I’ve been there twice. My first visit, we traveled in on the train from Padua (which is a fascinating city and has some magnificent art including the heartbreakingly beautiful Giottos in the Arena Chapel).

Sadly because all my photos from that 1985 trip have turned as pink as a slightly sunburnt lobster, I’m going to concentrate today on things I did outside Venice in 1995 when I last visited. These photos have survived much better!

There are a couple of really pretty, interesting islands on the lagoon within a short ferry ride of Venice. One is Burano which is like a fantasy – multicolored fishermen’s cottages and shops full of lace like spider webs. Check out the photos! Definitely worth a trip. The other is Murano which is a bit more industrialized. It’s where the famous Venetian glass is made and it’s fascinating watching the craftsmen at work.

Another place worth visiting in the lagoon is the Isle of the Dead (isn’t that a romantic title?) aka the Isola di San Michele. It’s the cemetery and it’s beautiful and quiet and green and there are some really interesting graves. Ezra Pound, the poet. Diaghilev, the ballet impresario. Wolf-Ferrari and Stravinsky, the composers.

I think my favorite excursion out of Venice was a day trip I took on the Brenta Canal which extends toward Padua. It goes through the Veneto which is where all the rich Venetians had their country estates and there are some gorgeous houses along the way, including some Palladian villas. It was a very atmospheric, gray day and the boat was far from crowded so it was very easy to drift into this lovely daze where I watched the beautiful scenery and imagined life in the renaissance!

I’ve included a photo of the Villa Foscari, also known as La Malcontenta (the unhappy woman) because a Foscari wife was shut up here for most of her life after she had a love affair. One of the most amazing things about this magnificent building is that it was used as a grain store for many years! Not exactly my idea of a barn!

I’ve also included two photos of the glorious and very extravagant Villa Pisani which was where Napoleon made his headquarters when he was in the area. There’s a wonderful Tiepolo ceiling featuring parrots that I remember very fondly!