China in England in Melbourne

The special exhibition during my visit was no mystery!

Recently, I was lucky enough to go down to Melbourne for a long weekend to see the Napoleon exhibition. I decided to make a museum-a-thon out of it and do the entire National Gallery of Victoria permanent collection (which took me all weekend).

The National Gallery of Victoria (NGV) is Australia’s greatest art gallery, thanks to some very generous patrons whose bounty still helps to purchase works for everyone’s enjoyment. The NGV contains Australia’s only Rembrandts and a glorious collection of decorative arts like furniture and ceramics. 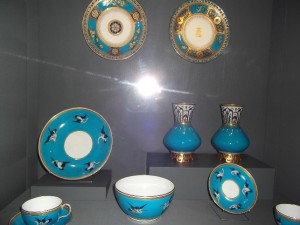 It’s often a shock for overseas visitors and people who live in today’s multicultural Australia quite how Anglo-centric Australian society was right up to the Second World War. Melbourne was full of people who had come to Victoria to make their fortunes in the Gold Rushes in the 19th century and while they might have remained in the Great South Land, they did their best to establish a little bit of England in Australia’s dusty climes. 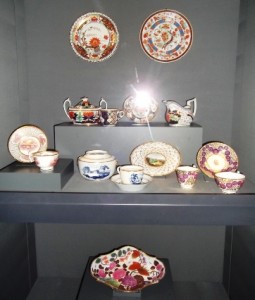 One of the upsides of this is that collections like the NGV’s contain hundreds and hundreds of British works of art. Not just paintings (because the Aussies had money during the Gold Rushes, a lot of the choice selections from each year’s Royal Academy salon ended up in Australia so local collections have wonderful examples of Victorian genre painting and the Pre-Raphaelites), but items like vases and dinner sets and silver and glasses and furniture. 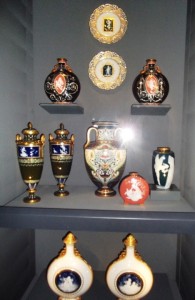 I’ve always loved English china, thanks to a mother who was a fan, so I was happy as a pig in mud viewing all the hundreds of magnificent examples of English ceramics in the NGV. One of the things I particularly love about ceramics is that the colors stay true. Check out the vivid blue of that beautiful Minton china – doesn’t it give you a tingle to think that the people who bought those delicate wares saw exactly what you do? Or look at how exquisite those Worcester pieces are. How does something as fragile as that survive from the 18th and 19th centuries? To me, it says that someone treasured it – again something that creates a link between now and history. 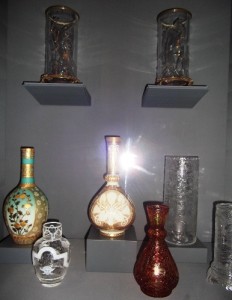 The glass collection in the NGV is beautiful too. Look at the pâte sur pâte glass that looks like china. Pâte sur pâte means ‘paste on paste’ and it was a technique of layering differently colored glass. Or check out the delicate Stockport glass in the other photo. Even more than china, glass strikes me as such a delicate survivor of the ages. Can’t you imagine some Regency rake lifting that glass to toast his mistress? 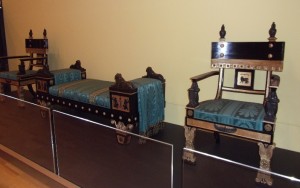 Finally, I thought I’d include a photo of some of the furniture that our Regency rake may have sat on. Following Napoleon’s Egyptian campaign (1798 to 1801), the pharaonic style was hugely popular right across Europe. This beautiful suite of furniture in the Egyptian style from the early 19th century is in an exquisite room full of Regency portraits. Isn’t that blue beautiful? Although unlike the Minton, to get that vivid color, you need modern upholstery.

I love how objects like these can open a window into the past. I also love how beautiful they are! I hope you’ve enjoyed this small glimpse into the riches in English decorative arts available in Australian public collections.