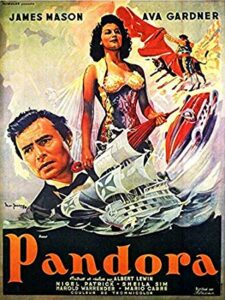 This month’s My Favorite Things falls into the category of the best movie you probably have never heard of!

Years ago, while I was still a kid, I saw and fell in love with an obscure British movie called Pandora and the Flying Dutchman (1951). I’m not quite sure why it’s so obscure – it has a great cast. It stars Ava Gardner who is luminously beautiful and James Mason who is as dark and sexy as he probably ever got. A plethora of well-known British actors surround these two doomed lovers, including Nigel Patrick and Marius Goring, who was one side of the love triangle in The Red Shoes.

The director and writer Albert Lewin wasn’t prolific. He only made six films, the best known of which is an atmospheric and brooding version of The Picture of Dorien Grey with Angela Lansbury and Hurd Hatfield. I’ve also seen The Moon and Sixpence, based on the Somerset Maugham novel and starring George Sanders. This wonderful movie inspired by the life of Gauguin is even more obscure than Pandora, which is saying something!

Last Saturday night, I was channel surfing and I was lucky enough to catch the introduction to this film. So I settled down for a couple of hours of doomed romanticism, wondering if the film would be as powerful as I remembered it. 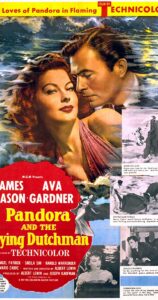 This is in many ways an odd movie – which I suspect partly explains its obscurity! It’s deliberately artificial. The pacing is stately to the point of glacial. There’s a very literary voiceover by someone who is merely an observer to events – a little like Wuthering Heights, where the housekeeper Nellie tells the story to lend us some distance from Cathy and Heathcliff’s tempestuous affair. And when I say literary, I mean LITERARY. Each sentence is beautifully crafted and there are numerous quotes from poems like “Dover Beach” by Matthew Arnold and the “Rubaiyat” by Omar Kayyam. Everybody on screen is rich and beautiful and not at all like the people you meet at your local grocery!

So we know we’re entering an artificial world when we watch this film. Yet the artificiality works beautifully – it makes us aware that we’re in a place of heightened sensation and exquisite emotion, beyond the reach of the everyday. The title alone tells us that this story takes place in the realm of the mythological and it bears witness to strange and miraculous things.

In the 1930s, a disparate group of expatriates gather at the Spanish seaside village of Esperanza (which translates as ‘hope’ – there’s not much in this film that doesn’t carry symbolic meaning). 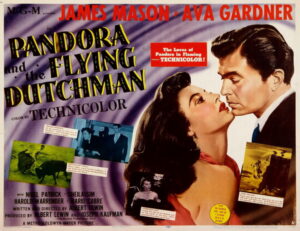 All of the men are madly in love with the gorgeous American nightclub singer Pandora Reynolds (Ava Gardner). There’s famous racing driver Stephen Cameron who plans to attempt to break the land speed record. There’s scholar Geoffrey Fielding (who narrates) and his niece who is in love with Stephen, much good it does her. There’s famous matador Juan Montalvo with whom Pandora has had a previous affair.

The theme of love and death forever entwined is set in the first few minutes, when Pandora’s admirer, the poet Reggie Demarest, drinks poison after she refuses to marry him.

The story of these displaced expatriates has a Hemingwayesque feel, until we meet newcomer Hendrik Van der Zee (“of the sea” in Dutch, I think) who sails into Esperanza on a mysterious yacht on the very night that Pandora promises to marry Stephen if he pushes his racing car over the cliff. More love and sacrifice, the overarching themes of the film. Stephen does, but then he salvages the car and uses it for his record attempt. By negating his sacrifice, he destroys any chance of Pandora ever loving him. 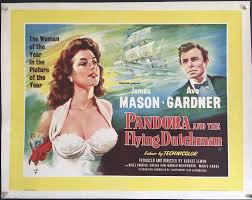 Pandora and Hendrik (James Mason) are immediately attracted to each other but struggle against the lure. Hendrik is the Flying Dutchman of myth, condemned to eternal voyaging for murdering his innocent wife and for blasphemy. Every seven years, he’s allowed six months on shore to find a woman willing to die for him.

If he finds such a woman, the curse is broken and he can seek eternal rest. The problem is that Hendrik comes to love Pandora too much to wish destruction upon her. There’s an absolutely breathtaking scene when Pandora finally confesses her love and he scorns her for her own good, even as he knows rejecting her condemns him to an eternity of torment. Amazing, heart- wrenching stuff.

I can’t think of another film that has quite this emotionally overwrought, other-worldly atmosphere. The Technicolor and production design are stunningly beautiful. The slow pace and literate script lull you into a state of mind where you’re hypnotized by what happens on screen. 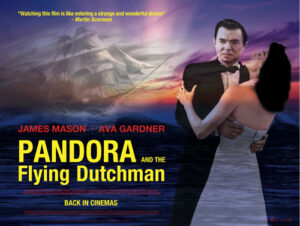 Watching Hendrik and Pandora yearn hopelessly after one another will break your heart. The inevitable drumbeat of doomed love marches through this film and leads toward an unforgettable climax.

If you can get hold of this movie and you can block out interruptions (any touch of the real world destroys the delicate pacing and tone), Pandora and the Flying Dutchman is well worth your time. Grand epics of love and death are hard to bring off, but this one does it in spades.