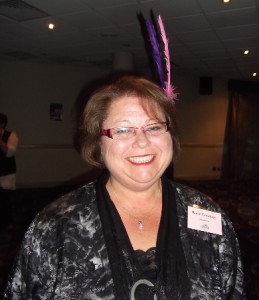 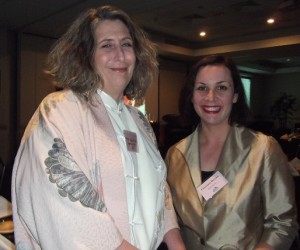 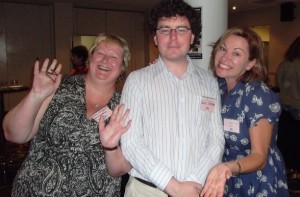 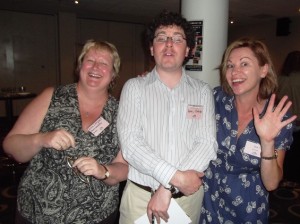 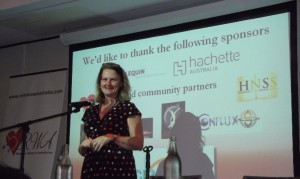 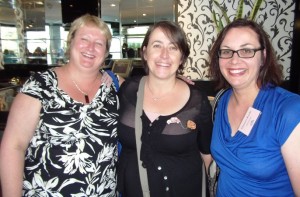 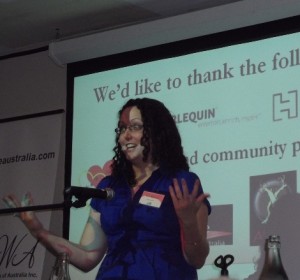 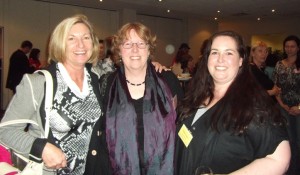 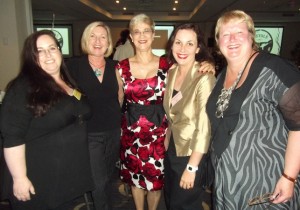 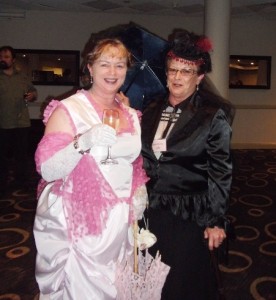 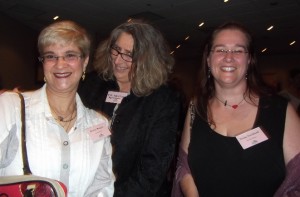 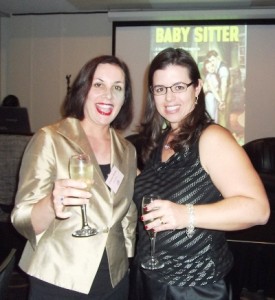 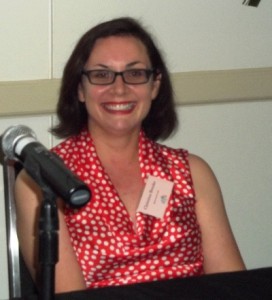 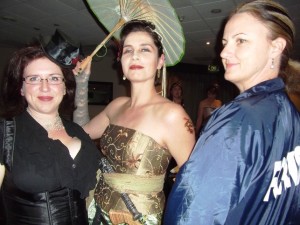 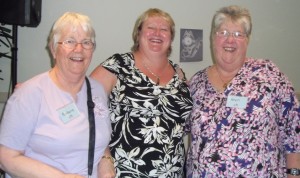 One of the perks of being a writer is going to fabulous conferences and conventions where I get to meet readers and writers and talk about that thing that we all love – BOOKS!

The first weekend in November, I took part in one of the most enjoyable writers’ conferences I’ve ever attended. The inaugural GenreCon was the brainchild of Kate Eltham and Meg Vann of the Queensland Writers Centre and Australian Writers Marketplace. Over 100 writers from romance, crime and speculative fiction met at Rydges Hotel in Parramatta to discuss industry, craft and creativity. It was wonderful to meet so many people from different areas of writing. It was also fun to have some men in the room – when you go to romance conferences, estrogen rules!

The conference started off with a fun cocktail party followed by a panel about how far can you go (the answer to that is actually pretty far!). Saturday I was purely an audience member. After a warm welcome from the QWC, I enjoyed panels on writing fight scenes and villains, monsters and cads. To finish the day, I attended the chat with Joe Abercrombie and found myself suddenly interested in reviving my long-dormant interest in reading fantasy!

Saturday night was the Pistols and Parasols banquet. I love it when people get dressed up for these events and some of the costumes were wonderful as you can see from the photos. There was definitely a steampunk flavor! Sarah Wendell gave us a cover snark which had everybody rolling in the aisles. A thrill for me was that many people received free copies of Seven Nights in a Rogue’s Bed, and to quote a QWC staff member, they were ‘hot property’. Nary a one was left for me to gather up for my stock by the end of the evening. Thanks to HarperCollins for their generosity!

Sunday I was a working woman. I managed to squeeze in Ginger Clark’s plenary, a frank but somewhat depressing roundup of the current publishing world, and a great panel about text and subtext. Otherwise, I was on the podium. I did a workshop on historical research that could have easily lasted for three hours instead of 90 minutes – apologies to anyone who felt that the info was rushed! I also participated in a panel with Joe Abercrombie and PM Newton about world building, chaired by Rowena Cory Daniells. I find it fascinating how crime and fantasy and romance overlap when it comes to world building.

Then it was time for the explosive finale of the conference, the Great Debate. The evil Plotter team, women’s fiction and YA writer Kim Wilkins, thriller writer LA Larkin, and speculative fiction writer Narrelle Harris were up against the good guys in the panster team – me (of course – you knew that!), Lisa Heidke and Daniel O’Malley

What was hilarious is that we were all true to our writing styles. The plotters had everything beautifully planned out, including a cunning plan to put us off our game by claiming they hadn’t prepared! The pantsers sadly fell into the shambolic but entertaining camp. Lisa even threw away her scrawled notes at one stage then forgot what she was going to say. Luckily, pantsers always have a moment of brilliant inspiration. Daniel interrupted his argument to kiss moderator Kate Eltham of the Brisbane Writers Festival and after that there was no way we were going to lose. Hurrah! Officially it was a draw but I know who REALLY won!

Congratulations to the QWC for a wonderful event. If you write genre fiction, I’d highly recommend attending the next GenreCon in Brisbane next year. I’m going to be there again! I wouldn’t miss it for the world.