I Carried a Watermelon… 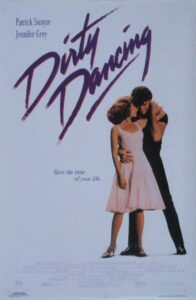 Can’t see the point myself. The original is perfect. I don’t want a new take on this story. I want Jennifer Grey as Baby and Patrick Swayze as Johnny Castle (be still my beating heart) and all the other wonderful characters and situations. You can’t tell me anyone today could have the impact of Mr. Swayze swaying across the dance floor to claim Baby from her corner. I just don’t believe it.

So that’s one ticket the new movie isn’t going sell.

In September’s MFT, I did a piece on The Ghost and Mrs Muir and commented on the fact that I couldn’t believe I hadn’t featured it as a favorite thing. Well, turns out I haven’t featured Dirty Dancing either! Barbecue my merengue and turn it loose in Texas! 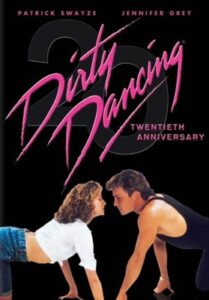 Dirty Dancing was produced in 1987 and was a huge hit. I looked up the box office on IMDB and after costing $6 million, it’s raked in nearly $214 million.

I vividly remember the very first time I saw it. I went on my own on a rainy afternoon (cyclonic rainy!) on the Gold Coast and I found myself utterly bowled over. I think I went to see it twice again in the next two weeks. Couldn’t get enough! I can’t say how many times I’ve seen it since. I watched it again so that I could write this piece. I found myself completely involved all over again in this ostensibly simple story of first love between a Jewish teenage girl from a rich family and the bad boy from the wrong side of the tracks who has a heart of gold under his leather jacket.

This film is a fairytale in many ways, an Ugly Duckling story. It’s lovely watching Jennifer Grey turn into a swan by the end through the magic of love. There are also elements of Cinderella and Sleeping Beauty.

Balancing these fantasy themes is the emotional truth of the story and that’s where the movie’s deepest power lies. I love that it’s so fixed in a particular time and place. The early 60s at a holiday lodge in the Catskills before Kennedy’s assassination. It’s ostensibly a time of innocence, but there are monsters in this Eden, including the slimy Robbie who sets his sights on Baby’s older sister Lisa. I love that the relationships ring true, not just the growing intimacy between Johnny and Baby but also her complicated interactions with her father (a wonderful performance by Jerry Orbach). One of the most touching scenes in the film is when Baby and her father finally confront each other about their disappointment in each other. There’s so much love and so much pain in this scene, it always makes me cry. The screenplay by Eleanor Bergstein is so subtle and clever, she fleshes out a whole lifetime in a few moments. Like the outwardly confident Lisa’s pathetic joy that her father no longer treats Baby as his favorite anymore. 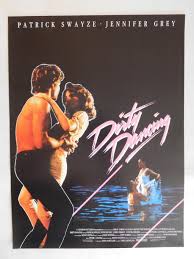 And it’s such a romantic film. Sincerely, genuinely romantic. There are so many scenes that make a romance novelist’s heart beat faster. The lovely dance lesson in the water where Johnny and Baby start to connect on a profound level and see each other beyond the stereotypes of their personas. The first love scene with its undercurrents of poignant uncertainty. The last scene where Johnny marches in and takes control of his kingdom. This scene with its “Nobody puts Baby in the corner” line comes in for some mockery and there’s certainly an element of cheese about it. But somehow it’s the perfect ending to this film, bringing the fantasy elements to a vibrant conclusion and drawing everybody together through the power of music.

I could go on and on. I suspect I’m speaking to the converted. I can’t imagine many of the people reading this column haven’t seen this film and I hope you loved it as much as I did.

And boo ya hiss to the remake!