I Wish I Own Iona!

I think we’re due for a couple of travel pieces to give you a break from books and music. So this month, I’m talking about the gorgeous Isle of Iona off the west coast of Scotland and next month I’m talking about the most romantic British historic house (well, in my opinion), Haddon Hall in Derbyshire.

There are two sacred islands off the British coast. One is Lindisfarne which is a mystical and wonderful place (and will probably form the subject of a future My Favorite Things) where St. Aidan established a monastery in the Dark Ages. The other is Iona, a tiny island off the larger island of Mull (which is my favorite place in the world – lots of favorites in this post!) in the Inner Hebrides. Interestingly enough, St. Aidan was originally a monk on Iona before he set off to convert the people of Northern Britain in the seventh century. Clearly he’d developed an eye for good island real estate! 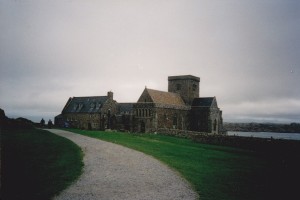 St. Columba, an Irish prince banished from his homeland, set up a monastic community on Iona in the sixth century and from here, he evangelized the Scottish mainland. Legend has it that he chose Iona because it was the first place his boat landed where he couldn’t see the Ireland he longed to return to over the horizon. Legends abound about St. Columba, by the way – it’s hard to avoid coming away with a head crammed with stories about the saint when you visit Scotland.

One of my favorites is his encounter with the Loch Ness Monster who reared up ferociously over his small boat when he was out on the loch. The saint blessed the monster and said “Go in peace, my son,” and the monster has ever since. Cool, huh? 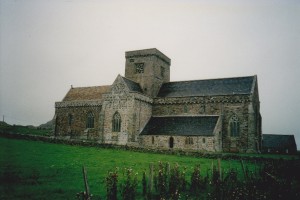 Legend or at least unconfirmed history has it that the beautiful Book of Kells, currently in the library of Trinity College, Dublin, was created on Iona. What is true is that the island became the center of religious power in northern Britain and that it was a thriving site of learning and faith until the Vikings brought that to a fiery end in the eighth century. The island has kept its religious affiliations. Today there’s an ecumenical religious community established in 1938 and religious pilgrims still form a substantial proportion of the visitors to the island.

The island is also famous as the burial place of Scottish royalty, including Macbeth who was nowhere near as bad as Shakespeare painted him. There’s a wonderful book by Dorothy Dunnett called King Hereafter that gives a much more accurate portrayal of the historical person including a beautiful if tragic love story with Lady Macbeth (who doesn’t have insomnia in this version).

Here’s the Wikipedia link to Iona with some interesting historical tidbits to entertain you. 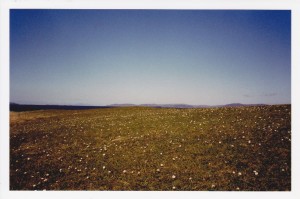 I’ve been to Iona twice. Once was on a very stormy day in 1995 (the photos of the 13th century church, rebuilt by the modern community, date from that visit). The second was during my long trip to the U.K. in 2004 when I got to spend several magical days on the island. It was May, the weather was perfect and spring had sprung in a really big way. The photo of the wildflower meadows gives you some idea of how pretty the machair was. Machair (pronounced to my non-Gaelic speaking self like macca) is the rich meadowland that extends up from Hebridean beaches in spring. The sheep love it – there were plenty of extremely happy fat lambs on Iona when I was there in 2004. 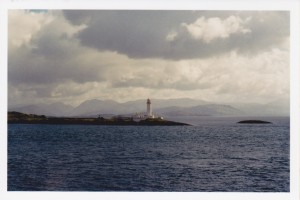 Iona is actually quite small (only 3.4 square miles) so it’s easy to cover most of it on foot. The majority of it is owned by the Scottish National Trust so visitors have free access to the beautiful beaches and fields. The beaches are clean white sand and the water in the sunlight has the opalescent color that I more readily associate with the Greek Islands than the Hebrides. The two beach photos really don’t look like Scotland, do they? One is of Martyrs Bay where two monks were slaughtered by Vikings (sad history for such a beautiful spot) and the other is the Bay at the Back of the Ocean. How could you resist such a name? The lighthouse is on the Isle of Lismore and this photo was taken from the ferry on the way to Mull. You’ll pass this on the way to Iona (a side benefit of visiting Iona is that you have a spectacular trip across Mull before you reach the ferry to your final destination). The picture conveys a hint of the way the hills rise from the sea in an endless panorama. 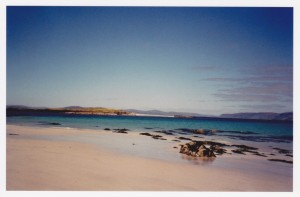 It’s hard to describe the atmosphere on the island. It’s serene but somehow alive and you’re aware of centuries of history scrolling back from the present as you wander the quiet paths. You certainly feel the monks are still watching over you – and they’re a friendly presence, much as I think Columba would have been a friendly presence. The light is clear and the scenery is gentle and strangely welcoming. One of the lovely things about staying on the island is that you can hear the ghostly voices of the past most clearly once the rush of the day is over. A lot of day tours visit the island and while it doesn’t get crowded (especially if you wander beyond the Abbey Church), it’s more tranquil once the hordes have gone away. Adding to the atmosphere of somewhere disconnected from the stresses and strains of the modern world is the fact that there are very few vehicles. You walk the land just as the monks did (well, they probably weren’t wearing Nikes, but you get the idea!). 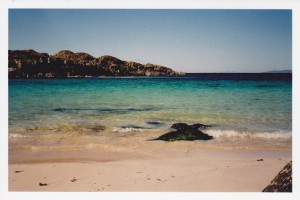 In late spring, when I was there, the evenings seemed to last forever as the day died in soft golden light. Or perhaps the soft golden light was the result of the glass of Drambuie with which I marked the end of each lovely day. There isn’t anything much nicer than sipping a heady Scottish liqueur while looking across the still sea and watching the sunlight fade away over the hills of Mull. Magic!