A Castle in Spain… 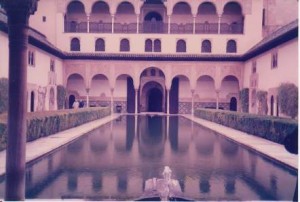 I grew up reading Harlequin Presents by the thousands – except they were called Mills and Boons here and it was back in the days when Harlequin didn’t have separate lines. Huge numbers of these books featured wide-eyed young English girls who fell hopelessly in love with dashing and arrogant Spanish men.

Spain was the location du jour of these jours many years ago. (I’m not saying we didn’t have electricity because honestly if you rubbed two mastodons together, you could get a nice current going) I still know a ridiculous number of Spanish endearments. Mi alma. Mi amor. Dios! Well, that last one isn’t an endearment but these commanding Spanish types used to ejaculate the curse a lot! 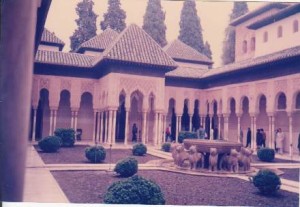 Because these books were written in the days before Mills and Boon included either male point of view or, shock, horror, detailed love scenes, many of them filled up their 180 pages with travelogue. For a starry eyed girl growing up in Australia, I loved to learn all about these glamorous, exciting, and above all historical places on the other side of the world.

So when I finally managed to visit Spain, it was with a lot of romantic preconceptions, thanks to writers like Violet Winspear and Anne Mather and Anne Hampson. I can understand why Spain has this perennial fascination for people from England – think of the contrast in weather, for a start. Although having said that, I was in Spain in late winter into early spring and quite often, the weather was just awful. It’s freezing across that central plateau with winds that cut through you like a knife, and there was quite a lot of rain. I don’t think I’ve ever been so cold in my life as I was one very grim day in Avila in early March. 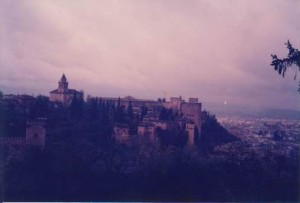 But when we hit southern Spain, especially Andalucia which was the last stronghold of Arab dominion on the Iberian Peninsula, I remember sun and warmth and gorgeous architecture. Then I had to look at my photos and of course, the day I went to the Alhambra, it was pouring with rain. None of which managed to dampen my experience of this utterly gorgeous place.

The Alhambra from the outside looks like a fortress, which of course it was. Inside, it’s one of the most beautiful and sybaritic pleasure palaces I’ve ever visited. In 1492, Ferdinand and Isabella conquered it and thereby ended the centuries-long occupation of Spain by the Moors who had originally come from North Africa. 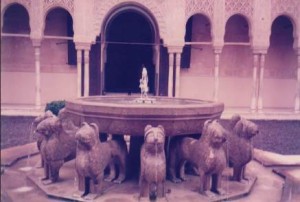 So when you visit the Alhambra, there’s this haunting air of the end of an era, of a past that can never be recaptured. You can almost hear the ghosts whisper around the next corner or see them slip into the shadows under some lacy stonework. The stone carvings are breathtaking, like flowering marble stems. The mosaics, all geometric, form a hypnotic pattern as you wander about the rooms. The gardens with their orange trees and dark cypresses standing tall against the sky are lush and beautiful.

Of course, that nostalgic atmosphere was emphasised when I visited by the fact that it was outside the height of the summer season and rainy so the palace was almost empty. You could hear the fountains splashing on the mosaics and wander around the beautiful pavilions without having to share your romantic fancies with ten thousand other people. 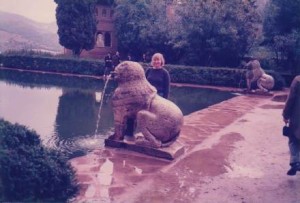 The Alhambra is one of those places that lived up to the hype. I haven’t been back since 1985. I’m not 100% convinced I want to go – I had a perfect day there, it seems sad to spoil that memory. One of the elements that came over so strongly in all the novels was the atmosphere of doomed romantic beauty and that’s actually what I felt when I visited. All that was missing was a Spanish duke who bit out ‘Dios!’ between his strong white teeth.