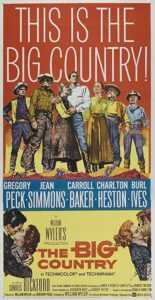 I’m back to talking about a favorite movie. This month it’s The Big Country, directed by William Wyler in 1958, and with an all-star cast including Gregory Peck, Carroll Baker, Jean Simmons, Charlton Heston, Chuck Norris and Burl Ives. It’s odd – I wouldn’t say I was such a huge western fan, but they seem to be featuring a lot on the website!

I first saw this film when I was about thirteen and it sparked a major crush on Charlton Heston who plays the secondary male love interest in the story. He’s lean and mean and tortured and passionate, and looking back on it many years later, I can kinda see where the fascination came from.

I’ve seen the movie a couple of times since and I must say over that time, my interest has definitely switched from Charlton to Gregory Peck who plays a really great hero in this story. But more on that later.

The story is on an epic scale, made a year before Wyler’s mega-hit classic Ben-Hur, also starring Charlton Heston but in what is strangely a considerably less interesting role. BH is heroism personified. His character, Steve Leech, in this movie is much darker and more conflicted and I think he’s better for it. Like Ben-Hur, The Big Country pits a strongly emotional story against an action-packed, sweeping background. It’s to Wyler’s credit (and his actors and writers) that the background doesn’t overwhelm the personal story. 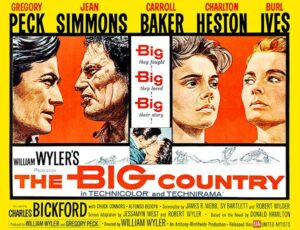 In the late 19th century, wealthy East Coast sea captain Jim Mackay (Gregory Peck) travels to meet his fiancee’s family on their ranch in the west. The actual state is never mentioned – I have a feeling it’s Texas but I could be wrong! He stumbles into a land war between his future father-in-law, Major Henry Terrill (Charles Bickford), who seems to personify all the virtues of civilization, and the Hannassey clan led by the brutish (at least superficially) Rufus Hannassey. Burl Ives plays Rufus and his Academy Award was well deserved – it’s an amazing performance and he steals the show whenever he’s on screen.

Caught in the middle is the woman who has inherited the ranch with the only reliable water in the area. Julie Maragon (Jean Simmons) owns the Big Muddy and gives both the Hannasseys and the Terrills access to the river but she’s a woman on her own and she’s vulnerable to the rough men who rule this country.

One of the things I love about this film is that nobody is exactly what he or she seems on the surface. Under his smooth façade, Major Terrill is a ruthless bully who insists on complete power over everything within reach. That includes his ranch, his workers, his foreman (Steve Leech, who he took in as an orphan child), the land, the water rights, his daughter and his prospective son-in-law. Rufus Hannassey has a stronger grip on honor than Major Terrill will ever have and his sons’ loutish behaviour leads to a moment of genuine tragedy towards the end of the movie. Pat Terrill appears to be a passionate, independent woman but as the story unfolds, it becomes clear that she’s completely under her father’s thumb. 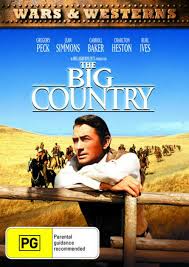 Jim Mackay is derided as an eastern dude and a coward because he refuses to enter into the power games that the other men in this harsh landscape play. Yet he proves himself a true hero throughout the film and especially at the end when he rides alone to rescue Julie Maragon from the Hannasseys in an amazingly tense scene that will have you on the edge of your seat. Jim demonstrates the quiet brand of courage that is incredibly moving and you know in Julie Maragon, with her steadfastness and honesty, he’s met his true match. One of the best scenes in the film is when Jim rides a bucking horse into docility. You’ll cheer his doggedness and determination.

This film is famous for its evocative soundtrack by Jerome Moross. I bought this on CD a few years ago and I just love it. But to see it with those epic images of men riding hell for leather through stony canyons, wow, that’s something special! Right from the turning wagon wheels of the opening, the music is as necessary to the story as any of the characters.

The Big Country is definitely in the long and illustrious line of revisionist westerns where heroism is tempered by doubt and darkness. It stands up remarkably well fifty years after its release. Seriously, give it a go – it’s long and engrossing and the sort of film they definitely don’t make any more!