I Wanna Dance in the Pan Pacifics with Fran! 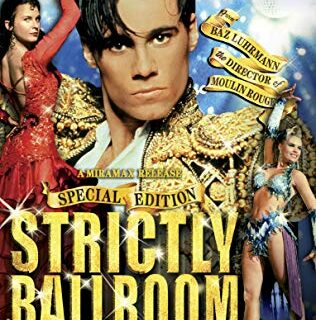 I must admit in general I’m not a huge fan of local cinema. Aussie films are often grim and bleak and favor atmosphere over a compelling plot.

There are exceptions to the rule. I loved My Brilliant Career although I haven’t seen it since I was a teenager. Never quite forgave the story for sending the heroine off alone although obviously I’m meant to go, yay, she’s stood up for her feminist principles. Breaker Morant has a really high stakes story and great acting. I also loved Picnic at Hanging Rock which somehow managed to overcome my atmosphere versus plot prejudice. But wow, what atmosphere!

There was a really nice romantic film called Dead Letter Office made by the people who produced and wrote Sea Change on ABC TV. Hardly anybody saw that film but it’s lovely and completely unpretentious. And as a strange coincidence, it also uses dance as a form of liberation for people stuck in old, unproductive ways of living. Lantana was undoubtedly grim but worked – I have a number of theories why, starting with a really great script, but I’ll share them at a later date. I’m sure there are other Aussie films I’ve liked but I can’t think of any right now. Which is rather sad. 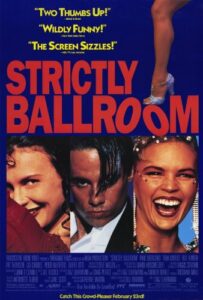 So why does Strictly Ballroom buck this trend? I think because it uses a really compelling story model. It has an identifiable hero, standing up against the odds for freedom of expression and accepting the consequences. Definite elements of the hero’s journey there.

Scott Hastings leaves the tribe, faces numerous trials and tribulations which he overcomes thanks to his sidekicks and his own courage, and he returns to the tribe bearing the elixir of a new way of dancing which revitalizes his family and friends. There’s even a symbolic death when he decides towards the end that he’s going to toe the line for the sake of the people he cares for, even though that means breaking the heart of the girl he loves.

Wow! All this mythic structure. I love it.

There’s even more. If we look at Fran as the protagonist, she’s a classic fairytale heroine. Elements of the Ugly Duckling and Cinderella abound. She even gets to go to the ball with her prince and what role does her grandmother play but that of fairy godmother?

Among the other mythical archetypes, we meet gatekeepers who seem to work against Scott but actually work on his behalf. Characters like his wonderful father played by the brilliant Barry Otto. Or Fran’s strict father who turns out to be a flamenco master. 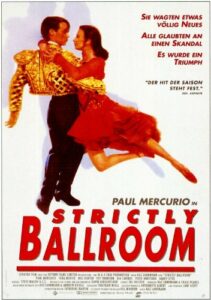 All of this is packaged in bright, neon colors and conveyed with a brilliant combination of knowing irony and deep emotion. It’s a hard mix to bring off but here it works like a charm. And the fantastic soundtrack tangos and waltzes and mambos its way throughout, giving the film a glorious rhythm.

I also think the casting is masterly. Ballet dancer Paul Mercurio with his flat Sydney accent makes a wonderful Scott Hastings. He even makes a white singlet sexy! Tara Morice as Fran transforms from ugly duckling into a swan with magnificent effect. There’s a host of established Aussie actors who attack their roles with dash and vim. Barry Otto is really touching as Doug Hastings, Scott’s despised father who turns out to be a wizard in disguise (if we’re sticking to the mythic theme!). Bill Hunter as the egregious Barry Fife who wants to keep his power in the ballroom dancing hierarchy and recognizes Scott as the genuine threat he is. Pat Thomson who is Dickensian as Scott’s mother Shirley. Gia Carides as Scott’s former dancing partner.

When Strictly Ballroom came out, I was living in a riverside Brisbane suburb called New Farm and there was a good arthouse cinema about twenty minutes’ walk up the road. SB ran there for about 12 months and I can’t tell you how often I saw it. There was a 4pm Sunday session and I was usually sick of writing by then so I’d wander up for my fix of glitz and glamour and singlets.

I haven’t seen the film since then until I watched it again for this column. And you know what? It’s still great and the final paso doble sequence still gives me goosebumps!