My Heart’s in the Highlands 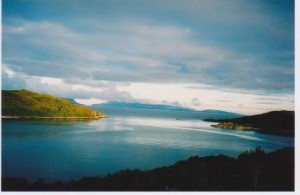 Do you know that lovely Robert Burns poem? It seems appropriate to quote it as I’m writing this on the 26th January, a day after Burns Night when Scots and Scotophiles all over the world celebrate the birth of Scotland’s most beloved poet. Anyway, the first verse goes:

Because I enjoyed writing last month’s column about Kent so much, I thought I might do pieces about a few more places I’ve visited and loved. Perhaps My Favorite Things should be retitled My Favorite Travels for the moment! Blame the fact that I’ve finally worked out how to use my scanner so I can share some of my photos with you all!

Today I’m going to talk about Morar and Mallaig on the north-west coast of Scotland. Mallaig is well known as the gateway to the Isle of Skye (well, the southern tip of it anyway). Morar featured in a great 1980s movie called Local Hero if any of you saw that. It was quirky and sweet and funny, and showed some amazing scenery, a lot of which was based around the Silver Sands of Morar. Doesn’t that name alone make you want to visit? And they really are silver! One of the nicest beaches in the world, I think. When the tide’s out, it seems to go forever. 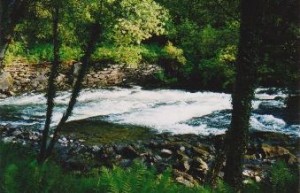 In 1995, I stayed very briefly at the Morar Hotel and while it was pretty chaotic and not very pleasant in terms of accommodation, I always remembered the site. It’s on the headland looking straight across to the Small Isles of Eigg (pronounced ‘egg’) and Rum. In the photos, Eigg is the curiously shaped flat one rising to a bluff and Rum is the mountainous one in the distance. Next to Rum is a rounded headland which looks like a whale’s head. That’s Canna which apparently means ‘whale’ in Norse. In the evening, you can sit in the hotel dining room and watch the sun set behind the Hebrides – a very romantic way to finish a glorious day in the Highlands! Here’s the hotel website with more photos to whet your appetite for a visit. 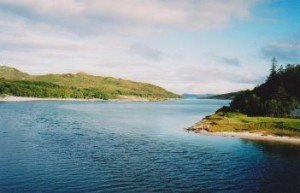 On my last visit to the UK in 2007, I looked up the hotel and was delighted to see it was under new management and starting to get a reputation for great cuisine. I finished my four-week stint in Britain with a couple of days there at the start of July. I was tired after all my travelling so spent quite a bit of time just staring out the window at the amazing view. I’ve included two photos taken from my window at different times of day so you can see the changes in the light.

Britain’s shortest river, the Morar River, runs just a quarter mile from Loch Morar to the inlet in the photos. The green picture shows its lovely sparkling falls. The Loch is Scotland’s deepest and features a monster even shyer than the much more famous Nessie. Her name is Morag – and no, I never saw her, even after several Drambuies! I like to think of Morag and Nessie perhaps one day getting together – well, I do write romance for a living! 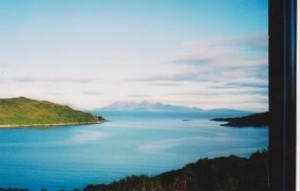 Mallaig, just a few minutes’ train trip up the line – and a very beautiful coastal trip too – has become a bustling center recently. When I first visited in 1985, it was only a couple of houses and a herd of sheep was wandering down the main road. These days, the sheep have been chased out by all the outdoor sports and wildlife enthusiasts. It’s a great place to book sea trips around the beautiful, wild and remote coastline. I went across to Seal Island near Skye and also did an amazing boat trip to see the Knoydart Peninsula which houses what is officially the most remote pub in the UK, the Old Forge. The photo of the mountains coming down to the sea is from that excursion. You can see what I mean about spectacular scenery!

Another glorious place just a few train stations south of Morar is Glenfinnan where Bonnie Prince Charlie raised his standard and rallied the clans in 1745. I’ve got to give him points for stage management. It’s an amazing location and one I’ll perhaps talk about more in another column. There’s currently a National Trust center on the site and it’s well worth a visit. 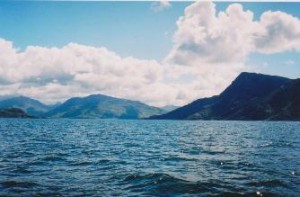 Harry Potter fans love this part of Scotland because the Jacobite Express, a restored steam train, doubles as the Hogwarts Express and travellers get to go over that amazing viaduct that features in the movies. The Morar Hotel is directly opposite the train station so the big black puffer started to feel like an old friend by the time I left.

Oh, I could go on and on! But seriously, if you’re in Scotland, consider a drive up the Road to the Isles or taking the spectacular train journey from Fort William to Mallaig. You won’t be at all sorry!