10 things I Love about 10 Things I Hate About You 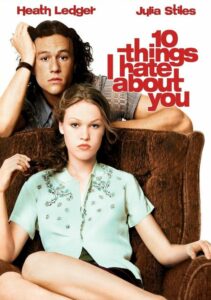 Like so many people around the world, I was saddened and shocked to hear of the untimely death of talented Australian actor Heath Ledger. So I thought I’d dedicate this month’s MFT to him and to talking about the wonderful 1999 teen romantic comedy that was the first movie I ever saw him in.

So what are the 10 Things I love about TTIHAY?

10. The pregnancy suit that Kat’s half-mad doctor father makes the girls wear before they go out so they’ll know what it’s like to be teenage and expecting a baby.

9. The vomit at the party scene. Oh, man, if that hasn’t happened to you, it’s happened to someone you know. Ain’t pretty, but sure was funny. And Patrick was just so gorgeous taking care of Kat in that scene. But more on Patrick later…

8. The romance-writing school counselor. Yeah, she was a bit caricatured. But believe me, I’ve had jobs where I’ve tried to work and write and it’s a bit difficult dragging yourself out of a steamy scene with a hunky and passionate Regency rake to pay attention to the day-to-day stuff! 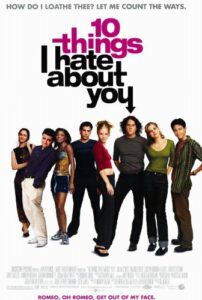 5. The scene on the sports ground where hunky Patrick gets the school band to play Can’t Take My Eyes Off You.

4. Patrick using his tough guy image to try and scare away Cameron and Michael, even drilling through a French text book with an electric tool to prove his tough guy status.

3. Patrick really being sweet and funny and gorgeous and just the man for Kat. And you know this from the moment he watches her with his heart in his eyes as she back-ends Joey the creep’s sports car.

2. Joey the creep’s comeuppance. Actually, Joey the creep altogether. Love his self-obsession. Him doing the underwear model poses is classic! I think that’s one of the reasons I adore this film so much. Every character is magic. There’s no bland spots.

1. And obviously, number one is the fantastic romance between Kat and Patrick. What chemistry. What sparkling dialogue. What emotional depths.

Honestly, this is one of the best romance films I’ve ever seen. If you haven’t seen it and want something clever and sexy and funny and romantic to pass a few hours watching, get it! You won’t be sorry.