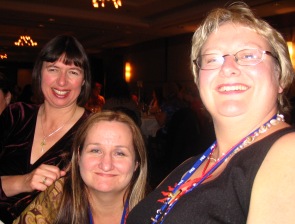 Undoubtedly one of my all-time favorite things is an Australian romance writers conference. And I’m not long back from “A Darling Affair” which was held at Darling Harbour (title’s a joke – geddit?) in Sydney from 10th to 12th August.

This year, we had fantabulous international guests. Jennifer Crusie did a whole day workshop on structure that was so inspiring. And even more exciting for me because I’ve been a fan girl forever was that she brought her great friend Anne Stuart with her. I actually got to be on a panel with Anne Stuart – talk about a surreal moment. I wouldn’t even say dream come true because I don’t think it ever occurred to me that something like that would happen. Sheila Hodgson from Mills & Boon in Richmond visited, as did Terry McLaughlin from California who writes for Harlequin.

We had the usual stellar line-up of Downunder authors, including Madame President Anne Gracie, Trish Morey, Yvonne Lindsay, Anna Jacobs, Kelly Hunter, Fiona Lowe, Denise Rossetti, Amy Andrews, Barbara Hannay (who received her RITA during the conference – how exciting was that?), Marion Lennox. There were also a fantastic number of debut authors – Alison Stuart, Emily Gee, Anne Oliver, Paula Roe (my fabulous web designer), Robyn Grady, Christine Wells. I know I’ve left people out of the list but there are just so many! It’s been a vintage year for Australian romance writing with more people receiving the call than ever. Whoo-hoo! 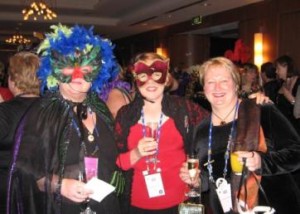 The whole shebang started with a great cocktail party with a Venetian Carnevale theme. Some of the costumes were amazing. It’s always so wonderful every year to catch up with old friends and make new ones. I just wish the conference went for a week instead of just a weekend. Actually, I’m not sure if I do. I’m not sure I’ve got the stamina! Or the head for all the champagne that seems to flow at these things.

Congratulations go to Kate Cuthbert, a tireless supporter of romance through her journalism and advocacy. She won the ROMA (Romance and Media Award) at the conference dinner. And congratulations also to Anne Oliver who won the R*BY (Romance Book of the Year Award) for shorter romance with her Sexy Sensation Behind Closed Doors (a debut book, fantastic!) and to Karina Bliss who won the R*BY for longer books with Mr. Imperfect (another debut – what’s in the water down here?). Also congratulations to double Golden Heart finalist Mel Scott who won the Emerald Award for a single title unpublished manuscript with “The Wolf Within” and my friend Rachel Robinson who won the category section of the Emerald with “Coveting the Boss.” This is Rachel’s second Emerald in a row – she won the single title section last year with “You Don’t Gnome Me.” Call me psychic but I think there might be a call in the offing for you soon, Rachel!

My fantastic critique partner Annie West and I did a workshop on Unleash the Alpha Hero! It was a lot of fun with some surprising people unleashing some wild men in the bits they read out in class. Especially loved the alpha who flung the heroine over his shoulder and marched her up the staircase! Wow! We gave out a lot of chocolate which I think did no harm to the atmosphere! Thanks to everyone who came along and joined in with such gusto!

Already looking forward to next year when we’ll be at the Langham in Melbourne kicking up our romantic heels!