A Movie That Steals Your Heart 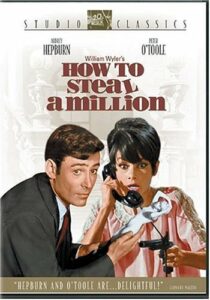 How To Steal A Million is one of my favorite movies. It never fails to make me smile, silly as it is. But it’s that sophisticated silly like a Shakespeare comedy or a Mozart opera that somehow manages to convey more wisdom in five light-hearted minutes than most tragedies deliver in five tedious hours.

What’s not to like? It’s a heist film but a heist film put together with black satin gloves and the sparkle of a diamond bracelet. So yes, there are twists and turns and an amazing robbery sequence and a final revelation that throws all the preceding events into a different light. But it’s all done with the bubble of champagne and the lilt of a waltz set to the verve of the John Williams score.

Audrey Hepburn’s dad is the last of a long line of art forgers. When she and her father realize that the myth of the fabulous family art collection is about to explode because they’ve lent a supposedly priceless statue (the ‘million’ in the title) to an exhibition, she hires burglar Peter O’Toole to help her steal it. Sounds a bit banal but honestly, it’s all done with such style and panache and grace, it sparkles.

Let me list a few things that are just amazing about this film. The sexual tension between the hero and heroine is palpable. And these clever, witty people banter with dialogue that just makes me want to weep (once I’ve stopped giggling), it’s so perfect. This is a love affair not just between two beautiful people, but between two beautiful minds and I just LOVE that. 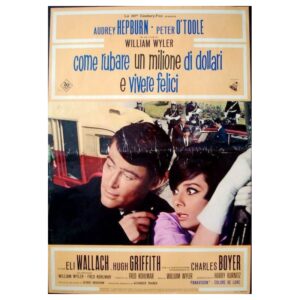 Peter O’Toole is just gorgeous – he’s urbane and charming and has this lovely understated sense of humor that makes you want to take him home. Audrey is gorgeous too and no slacker in the repartee department either. And she gets to wear one of those whacky Givenchy 1960s wardrobes that makes you wish you’d been born a few years earlier. Of course, to wear these amazing clothes with conviction, you’d have to look like Audrey, you’d have to live in Paris and you’d have to be rich and stylish. But a girl can dream!

I’ve never settled down to watch this film without a smile. I’ve never hit the rewind button after this film has finished without a smile. I hope, if you haven’t seen it, you’ll give it a go because it really does add to the sum total of human happiness. A huge claim for a slight little comedy, but I truly believe that. They don’t make films like this any more. Oh, but how I wish they did!