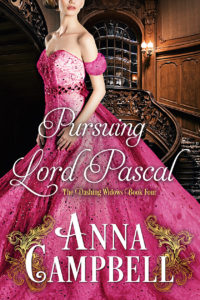 Famous for her agricultural innovations, Amy, Lady Mowbray has never had a romantical thought in her life. Well, apart from her short-lived crush on London’s handsomest man, Lord Pascal, when she was a brainless 14-year-old. She even chose her late husband because he owned the best herd of beef cattle in England!

But fate steps in and waltzes this practical widow out of her rustic retreat into the glamour of the London season. When Pascal pursues her, all her adolescent fantasies come true. And those fantasies turn disturbingly adult when grown-up desire enters the equation. Amy plunges headlong into a reckless affair that promises pleasure beyond her wildest dreams – until she discovers that this glittering world hides damaging secrets and painful revelations set to break a country girl’s tender heart.

Gervaise Dacre, Lord Pascal needs to marry money to rescue his estate, devastated after a violent storm. He’s never much liked his reputation as London’s handsomest man, but it certainly comes in handy when the time arrives to seek a rich bride. Unfortunately, the current crop of debutantes bores him silly, and he finds himself praying for a sensible woman with a generous dowry.

When he meets Dashing Widow Amy Mowbray, it seems all his prayers have been answered. But his mercenary quest becomes dangerously complicated when he finds himself in thrall to the lovely widow. Soon he’s much more interested in passion than in pounds, shillings and pence. What happens if Amy discovers the sordid truth behind his whirlwind courtship? And if she does, will she see beyond his original, selfish motives to the ardent love that lies unspoken in his sinful heart? 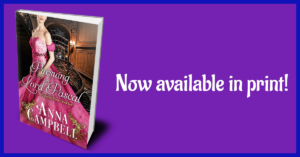 “You and Sally looked very serious,” Lady Mowbray said, as his curricle rolled away from the front of the house. His groom was waiting for him back in Sally’s kitchen—Pascal didn’t want anyone overhearing this conversation.

“She was warning me to be careful with you.” Deftly he angled the light carriage between two heavy drays threatening to block the road.

Annoyance flashed in her hazel eyes, turned them a rich gold-green. “Did she indeed? I’ll have a word with her when I get home.”

“She has a point. I have a reputation as a rake, and I’m famous for trifling with ladies’ affections, then dropping them cold.”

“I know about your reputation.” She studied him with that direct, inquiring gaze he recalled from their dances last night. “All Silas’s society friends are naughty men.”

“Your brother isn’t naughty anymore.” Eight years ago, Lord Stone had married a lovely widow, and he’d been blissfully happy ever since. Something about Amy Mowbray’s company on this fine day made Pascal wonder if emulating him mightn’t be a bad idea.

“Not in public, anyway.”

“So you’re not afraid of my intentions?”

Still she inspected him, as if she saw beneath his spectacular hide to the less than spectacular soul beneath. With most of his flirts, problems invariably arose once the lady discovered an average man lurked beneath his apollonian looks. They expected a prince, and instead got Gervaise Dacre, with all his faults.

Under Amy Mowbray’s regard, he shifted uncomfortably. He had an awful suspicion she already guessed he wasn’t a perfect knight.

A faint smile lifted one corner of her mouth. He bit back the impulse to kiss her. One day, he would. Not today. And not when he had to devote at least half his attention to negotiating London’s bustling streets.

“You know, I’m not sure I am.” Her smile lengthened. “Although I’m hurt you don’t remember that we’ve already met.”

The carriage’s gentle rocking bumped her hip against his in a pleasing way. “You’ve been to London before?”

“I had a season before I married. But before that, you came to Woodley Park for the hunting. I had a horribly painful case of calf love for you when I was fourteen, my lord.”

He racked his brains. He remembered visiting Lord Stone’s beautiful Leicestershire estate on several occasions. He remembered Helena, Stone’s dashing dark-haired sister, and Robert, tragically lost at sea a couple of years ago. “I should have noticed you.”

She made a dismissive sound. “No, you shouldn’t. Not really.”

A glimmer of memory sparked. “You were the girl who talked farming at dinner.”

Another blush. “I was an awful bore.”

He laughed and shook his head. “You terrified the life out of me. I already didn’t feel clever enough to be a guest in that house. Helena and Robert discussed mathematics. Silas was busy with his botanical specimens. And most intimidating of all, there was this young Minerva who knew all about new strains of wheat. I felt hopelessly shallow.”

“We can be a bit overwhelming when we’re together.”

Pascal frowned, struggling to summon the details of those long ago house parties. “We danced together, didn’t we?”

She looked sheepish. “Now I am surprised you’ve forgotten that. I bruised your toes most egregiously.”

He gave a low laugh. “You didn’t last night. You’ve been practicing.”

A mysterious smile curved her lips. “I have.”

It was his turn to study her and try to winkle out her secrets. Luckily they’d turned into the park so he was no longer at risk of killing someone, if he didn’t pay attention to driving. “Make me a happy man, and tell me you’re still carrying the willow for me.”

“Don’t be absurd.” The blush intensified, and she looked away. “I’ve been married and widowed since then. My passing fancy for you ended nearly ten years ago.”

“Pity,” he said shortly. “Are you still interested in modern farming?”

Her expression turned wry. “If I say yes, does that mean you’ll drop me from your list of dance partners?”

“No, I don’t think it does,” he said slowly. “I could listen to you talk about anything, even marrows and parsnips.”

A dry laugh greeted what had been a sincere statement, damn it. “My lord, you’d better watch out. I might put that flummery to the test. There’s a new variety of turnip coming out of the Low Countries that has me in alt. I can talk about it for hours.”

He shook his head, enjoying her humor. Her crackling intelligence was devilish appealing. Especially after a month of Miss Veivers and her ilk. “I look forward to hearing about it.”

Actually recent bad harvests had turned his mind to crop yields, if only out of self-interest. “So you were madly in love with me,” he said in a considering tone.

“Quite madly.” With exaggerated ardor, she batted her eyes at him.

“So who was the cad who stole you away from me?” He set the horses to a gentle amble, so he could concentrate on the woman beside him.

Regret shadowed her eyes to the color of light through a forest glade. He’d never met a woman with such an expressive face. “You’re asking about my husband.”

“Yes.” He drew the carriage to a stop under a chestnut, coming back to life after a long winter. Pascal had an idea how that felt.

Admiration and social success had spoiled him. The ennui of the last few years was the inevitable result of never needing to strive for anything. In Amy Mowbray’s company, ennui was the last thing he felt. Marrying this widow for her money promised to be a complete and undeserved delight.

She avoided his eyes and smoothed her dark green skirts over her knees. “How odd. We’re already progressing beyond small talk.”

“I think…I think I’d rather talk about the weather.”

He let the silence extend, until she turned troubled eyes up to meet his steady gaze. “We’re strangers, my lord.”

They were concealed from sight, unless someone followed the winding path behind them. He placed his hand on hers where it twisted the material of her skirts. Over the years, he’d explored every sensual pleasure, so touching Amy’s hand should have no great significance. But when she didn’t pull away, he felt a surge of anticipation completely out of kilter with the action’s innocence.

“Nonsense. I’ve known you since you were fourteen.”

“Even if you don’t remember.” She cast him an unimpressed glance under her thick fan of eyelashes. “And should we be holding hands in public?”

He smiled, unexpectedly enchanted. Last night, he’d liked her, and he’d found her attractive—what red-blooded man wouldn’t? But today, every second changed the performance of duty into the pursuit of pleasure.

The world considered him a lucky sod. Right now, when fate offered him the chance to bed Amy Mowbray and at the same time, solve his financial woes, he was inclined to agree. He knew enough about women to recognize that, while she was far from won, she was intrigued. There was a catch to her breath, and the heaviness in those bright eyes betrayed sensual interest.

“There’s nobody here but us.”

He looked around, as if checking for observers. “A man must seize his opportunity.”

“Lord Pascal…” she said repressively, although the throb of excitement in her voice ruined the effect.

“Lady Mowbray.” He tightened his hold on her hand, although she hadn’t tried to pull away. On the narrow seat, her hip nestled warm against him.

Good intentions could go to blazes.

He leaned in and brushed his lips across hers. There was a fleeting sweetness, a huff of feminine outrage, the impression of softness. Then he drew back, astonished at how difficult it was to resist returning for a longer taste.

The air shimmered with awareness, before she broke the thread twining between them with a soft laugh. “My goodness, you really are a rake. How exciting.”

Curiosity lit her eyes, and her lush lips were still parted. Then and there, he decided that this pursuit was serious. Probably the most serious thing he’d ever attempt in his hedonistic, purposeless life. “Reformed rakes make the best husbands, I’ve been told.”

Shock widened her eyes, banished the amusement. More shock than she’d demonstrated when he kissed her. Which was interesting.

He smiled self-confidently and turned his attention to the horses, flicking the reins to get them moving again. “I warned you I had intentions, Lady Mowbray.”