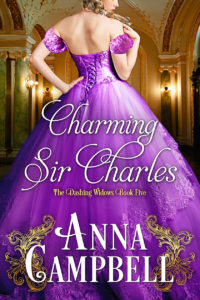 Sally Cowan, Countess of Norwood, spent ten miserable years married to an overbearing oaf. Now she’s free, she plans to have some fun. But before she kicks her heels up, this Dashing Widow sets out to launch her pretty, headstrong niece Meg into society and find her a good husband.

When rich and charming Sir Charles Kinglake gives every sign that he can’t get enough of Meg’s company, Sally is delighted to play chaperone at all their meetings. Charles is everything that’s desirable in a gentleman suitor. How disastrous, when over the course of the season’s most elegant house party, Sally realizes that desire is precisely the name of the game. She’s found her niece’s perfect match—but she wants him for herself!

There are none so blind as those who will not see…

From the moment Sir Charles Kinglake meets sparkling Lady Norwood, he’s smitten. He courts her as a gentleman should—dancing with her at every glittering ball, taking her to the theatre, escorting her around London. Because she’s acting as chaperone to her niece, that means most times, Meg accompanies them. The lack of privacy chafes a man consumed by desire, but Charles’s intentions are honorable, and he’s willing to work within the rules to win the wife he wants.

However when he discovers that his careful pursuit has convinced Sally he’s interested in Meg rather than her, he flings the rules out the window. When love is at stake, who cares about a little scandal? It’s time for charming Sir Charles to abandon the subtle approach and play the passionate lover, not the society suitor!

Now with everything at sixes and sevens, Sir Charles risks everything to show lovely Lady Norwood they make the perfect pair!

Now available in paperback from Amazon; Am 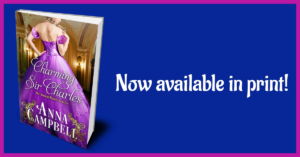 When Lady Norwood’s niece Meg leaves her stranded in an isolated hunting box with the handsome Sir Charles Kinglake, things quickly heat up!

Oh, dear, it sounded like they were stuck here. Trepidation trickled down Sally’s spine. It had been hard enough hiding her yen for Sir Charles in a crowd of people. Here where they were alone, she had a sick feeling that he’d discover she felt much more than friendship for him.

And that promised years of awkward family gatherings, once he’d married Meg.

Her hands unsteady, Sally took off her bonnet and set it on a carved Jacobean chest against the wall. “Is there a village nearby?”

“No. I warned you both that the property is isolated. The nearest village is Upton, but it’s a good ten miles away.”

“Anyway,” she said, striving to be sensible as she stripped off her gloves, “we need to stay here and wait for Meg to come back. There’s no point in us getting lost, too. Do you know how far the Gailes estate is from here?”

“Seven miles at least.” He turned to her. “If you wish, I can go cross-country to find it. Or try to make it to Upton.”

Sally shook her head. “What would that achieve?”

“We’re alone in this house. I don’t want you to feel unsafe.” He moved behind her to help her take off her pelisse. When he leaned close enough for her to catch the clean scent of his skin, her ungovernable heart missed a beat.

“I trust you,” she mumbled, trying to steady her breath.

Of course she trusted him. He wasn’t interested in her.

“Thank you. I appreciate that.” To her astonishment, he placed his hands on her shoulders and gave them an encouraging squeeze. “But you must know if word gets out about this, it will damage your reputation.”

She made a dismissive sound and turned to face him, dislodging his hold. But the heat of his touch still sizzled through her veins and whispered temptation. “I’m a widow of advanced years and unsullied reputation. Nobody is going to question our actions.”

“Devil take you, Sally.” He frowned as he tugged off his gloves and shoved them in his pocket. “I wish you wouldn’t do that.”

“Do what?” She’d forgotten that it was dangerous to look into his face. He was close enough for her to see all the varied shades of brown in his eyes. And the thick black lashes shadowing them.

For one lost moment, she swayed toward him, before sense asserted itself and she stepped away. Her knees felt horridly shaky.

“Talk about yourself as if you were too old for scandal. You’re a lovely, sparkling woman and, believe me, if society finds out I had you to myself, the male half of the ton will be green with envy.”

She started to laugh, but something in his expression quashed her amusement. “Sir Charles, I think you mean that,” she said in surprise.

A muscle flickered in his cheek, and those toffee eyes focused somber and intent upon her face. “I’ve never meant anything more.”

“You’re so kind,” she said wonderingly, suffering once again that powerful urge to lean into him.

He caught her hand. The shock of his bare skin on hers shuddered through her like a lightning strike. “No, damn it, I’m not being kind.”

She wanted to argue, but couldn’t summon the words. Having spent days avoiding the penetrating dark gaze, she stared up into his chiseled features and couldn’t look away even if an earthquake struck.

“What have I done to offend you?” His grip on her hand tightened, and his expression turned urgent. “Lately you’ve barely given me the time of day. Whatever it is, let me make it up to you. I hate it when you’re cold to me.”

Somewhere at the back of her mind, a voice screamed that he shouldn’t care, that she played no important role in his life. But that piercing gaze held her captive. And her awakening desire nailed her feet to the floor.

It was intoxicating to have this marvelous man staring down at her, as if nothing else in the world existed.

“You haven’t offended me. How could you?” She licked dry lips and watched his eyes flicker down to the betraying movement. With a desperate attempt to return to something like their usual interactions, she said, “I don’t think you should be holding my hand.”

“So do I,” she admitted, before she questioned the prudence of honesty.

“And I don’t think you should call me Sally.”

“For God’s sake, call me Charles.”

Urgency roughened his deep baritone and made her shiver with longing. She’d been so wise to avoid his gaze. Now that she stared up at him, she couldn’t stop.

She’d never before realized how many shades of brown there were in the world. Honey. Russet. Deep, dark brown. Burnt caramel. Gazing into Sir Charles’s eyes, she felt like she drowned in hot treacle. What a splendid path to oblivion.

Her hand trembled in his, but she still couldn’t summon the will to withdraw, when this might be her only chance to touch him. Her heart beat high and frantic in her throat.

It was like being utterly terrified. Except somehow she wasn’t.

She made a halfhearted effort to pull away, but didn’t get anywhere. “We’re alone here.”

His lips flattened. “Believe me, I know.”

“We should…we should try and remember the proprieties.”

She made herself blink, but still everything in this room except Sir Charles’s powerful form receded into unreality. She felt dizzy, and her unreliable knees threatened to collapse beneath her. Her grip on his fingers firmed, and she told herself, without believing a word of it, that she only held onto him because she was afraid of falling.

Heaven help her, she couldn’t think of a single reason. She fell back on repeating herself and knew in doing so, she lost the argument. “Because we’re alone.”

His gaze sparked with the humor she’d noticed and liked from the first. Those fascinating lines around his eyes deepened. “All the more reason to seize my chance.”

Had he edged nearer? The heat radiating from his large, masculine body made every hair on her skin stand up. A hot, heavy weight started to throb in the pit of her stomach. Her breath jammed in her throat, making her even more lightheaded.

Heaven help her, she’d never felt like this before.

“I think…I think I need to sit down. I’m not feeling at all well,” she said faintly.

“Let me help you. You’re looking a little flushed.”

She quivered with wanton delight as a powerful male arm curled around her waist.

“Sir Charles…” She tried to make his name sound like a protest, but even in her own ears, it emerged like a sigh of surrender.

She placed her hands flat on his chest and tried to ignore how broad and hard he was under her palms, like sun-warmed rock. “You should let me go.”

“This isn’t right,” she whispered. Her tight throat made speech almost impossible.

Surely that couldn’t be desire in his eyes. If she’d come to terms with one thing during these last days, it was that he couldn’t possibly want her.

“It feels right to me. Doesn’t it feel right to you?”

“I…” She struggled to lie and say it didn’t. But the woeful truth was that she loved being this close to him. She loved the drift of his warm, musky scent, and the pressure of his large, capable hand against the small of her back. Especially when she’d never imagined he’d touch her like this. “I can’t see this as proper behavior.”

Had he moved closer still? “I’m not doing anything that I haven’t done when we’ve danced.”

“In a room full of people.” That large, capable hand firmed, curving her toward him.

It would be so easy to succumb. She wanted him so much. In a final, desperate attempt to wrench herself back to bitter reality, she forced herself to mention the forbidden topic. “What about Meg?”

His grip tightened on her waist, and hard as she tried, she could find no trace of guilt in his face. “To hell with Meg.”

She told herself to resist the press of his hand, but she felt her bones softening in surrender. “There is no us.”

The awful truth was she didn’t. She battled to muster further protest. The mention of her niece should have brought this always gentlemanly gentleman back to his senses, but his eyes only burned hotter as he surveyed her.

“You say you trust me, Sally.”

“Of course I do,” she said quickly, even though right now she wasn’t sure that was true. “And don’t call me Sally.”

He gave a soft huff of laughter. “I can’t call a woman I’ve kissed Lady Norwood.”

“Ki…” She gulped for air and told herself to put this impudent fellow in his place. “But you haven’t.”

“I’m getting ahead of myself.” His other large hand cupped the back of her head. Heat sizzled through her, stole what little air remained in her lungs. “You must forgive me.”

Why the devil didn’t her legs work? One might almost imagine she stood here and agreed to let Sir Charles kiss her. “I won’t forgive you if you kiss me,” she whispered.

She saw he didn’t believe her denials. Why would he? She certainly didn’t. The shameful truth was that if he didn’t kiss her in the next second, she’d shatter into a million pieces.

“It will be worth it.” His face was now so near that his breath whispered across her lips like a promise of the kiss to come.

The teasing delay was torture. She forgot everything except her need to feel that clever, sensual mouth on hers. Even if she was damned for it.

She couldn’t contain a choked sound of yearning.

Of course he heard the incoherent desire in the whimper. His brown gaze flared gold, then her eyes fluttered closed as his lips touched hers. With a sigh, she arched into him and parted her lips.