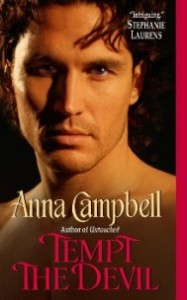 For Olivia Raines, London’s most notorious courtesan, and the infamous Julian Southwood, Earl of Erith, falling in love will be the greatest risk of all in this wicked and wild romance from Anna Campbell

Any man in London would worship her. Yet Olivia is, quite frankly, bored of them all. Despite her many dalliances, she’s never felt true passion, never longed for any lover’s touch… until Julian, London’s most notoriously wanton rake, decides to make her his mistress.

From the moment he first sees her, Julian knows he must possess her. And when he discovers her greatest secret, a scandal that could ruin her reputation and end her career, he knows just the way to use this damaging information to his most delightful advantage. He offers Olivia a deal with the devil: he’ll keep her secret… if she allows him the chance to show her true ecstasy.

But Olivia must be careful, for Julian has a secret of his own: he will not rest until she is completely, shamelessly his.

Across the packed, noisy salon, Julian Southwood, Earl of Erith, studied the infamous strumpet who would become his next mistress.

He was in the middle of Mayfair on a fine spring afternoon. Yet the reek of sex for sale was as pungent as in the slave markets of Marrakesh or Constantinople.

The crowd was mostly male although a few provocatively dressed women mingled in the throng. Nobody paid them the slightest attention. Just as nobody but Erith seemed to notice the startling and realistically detailed frescoes of rampant Zeus seizing swooning Ganymede.

From a corner dais, a pianist and violinist doggedly plowed through a Mozart sonata. The music came from a different world, a cleaner, purer world untainted by animal carnality.

A world the Earl of Erith would never again inhabit.

He shook off the bleak self-reflection and turned to the man beside him.   “Introduce me, Carrington.”

Carrington didn’t ask the object of Erith’s interest. Why would he? Every man here, including his companion, focused on the slender woman coiled with studied nonchalance upon the chaise longue.

Without being told, Erith knew she’d deliberately chosen her setting in front of the tall west-facing windows. Late afternoon sun flooded her in soft gold and played across her loosely bound tumble of tawny hair. In the clear light, her vivid red dress was like a sudden flame. The effect was worthy of the Theatre Royal.

Even he, familiar to ennui with courtesans’ tricks, had felt the breath catch in his throat at first sight of her. One glance and the blood in his veins hummed a deep, dark song of desire and his skin prickled with the compulsion to make her his.

And she achieved this remarkable effect from half a room away.

Of course, this was no ordinary courtesan.

If she were, he wouldn’t be here. The Earl of Erith only bought the best. The best tailoring. The best horses. The best women.

Even by his exacting standards, this particular cyprian was a prime article.

Two extraordinary women had set London on its ear in the last ten years. One, Soraya, cool, dark, mysterious as moonlight, had recently married the Duke of Kylemore, igniting the scandal of the decade. The other, radiant sun to Soraya’s moon, arrayed herself now before Erith like a spectacular jewel.

He assessed her as closely as he’d contemplate an addition to his stables.

Lord, but she was a long Meg. A sheath of crimson velvet displayed her lean body to dramatic advantage. She’d fit his tall frame to perfection, even if his taste usually ran to plumper, more voluptuous bedmates. His memory filled pleasantly with the fleshy blonde charms of Gretchen, the mistress he’d left in Vienna a month ago.

Gretchen couldn’t contrast more strongly with the jade before him. Where the Tyrolean beauty offered soft, yielding curves, this woman was all spare elegance. The bosom under her gown’s low neckline wasn’t generous and her waist was long and supple. He guessed the narrow skirt hid legs as graceful and elongated as a thoroughbred’s.

Gretchen had been dewy with youth. This woman must verge on thirty. By that age, most bits of muslin frayed at the edges. But this bird of paradise continued her unchallenged reign over the male half of the ton. Her longevity as the most sought-after courtesan in London made her yet more intriguing.

His gaze slid up to her face. Like her body, it was unexpected. After the rhapsodies he’d heard in the clubs, he’d imagined less subtle attractions. The unmistakable greed he’d heard in her admirers’ voices had led him to imagine a brassier, more overtly available bawd.

Her jaw was square, almost masculine. Her nose was a trifle too long, her cheekbones too high. From where he stood in the gilt-framed doorway, it was impossible to tell the color of her eyes but they were large and brilliant and set at a slant.

Her mouth perhaps explained what he’d heard about her preternatural allure.   It might be too large. But who would complain? No man could look at those succulent lips without wanting them on his body. Erith’s groin tightened at the decadent pictures rocketing through his mind.

Undoubtedly, she had… something.

She wasn’t a great beauty. She was well past first youth. Nor did she flaunt her charms like tawdry trinkets on a fairground stall. If he’d encountered her at a respectable gathering rather than this louche brouhaha, he’d almost believe she belonged to his own class.

After the hubbub, all this was surprising. Disappointing.

But even as he dismissed the wench’s heralded charms, his eyes gravitated back to that spare, strangely aristocratic face. To that sin of a mouth. To the luxuriant hair. To that long, graceful body curved in complete relaxation upon her couch while men eddied around her in an endless whirlpool of fascination.

She was the most powerful figure in the room. Even at the distance, he felt the sexual energy sizzling around her.

She swept the room with a contemptuous glance. The raised angle of her chin and the irony that teased the corners of her mouth indicated defiance, courage, challenge.

He tried to deny the sensual pull she exerted. While his reckless heart kicked into the emphatic rhythm of a drum beating an army into battle.

No, she wasn’t what he’d expected but he didn’t fool himself she was anything less than quality.

She lifted her head and smiled at something the effete fellow standing at her elbow said. The lazy curve of those lush red lips shot another jolt of lava-hot arousal through Erith. That smile spoke of knowledge and sharp intelligence, and a sexual confidence he’d never encountered in a woman. Never, even though he’d dealt with the fallen sisterhood for the last sixteen years. Every drop of moisture dried from his mouth and his interest, wearied through playing this game too long, engaged

with an intensity that astonished him. The covetous buzz in his blood notched up a degree.

Not just because she was the elite of London’s courtesans and his prestige would accept nothing less as his chere-amie. But because he wanted her.

More than he’d wanted anything in a long, long time.