A Scoundrel By Moonlight 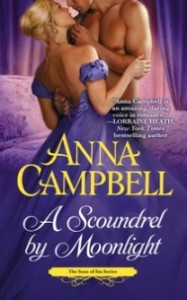 book 4 in the Sons of Sin series

Anything can happen in the moonlight…

Justice. That’s all Nell Trim wants – for her sister and for the countless other young women the Marquess of Leath has ruined with his wildly seductive ways. Now she has a bold plan to take him down… as long as she can resist the scoundrel’s temptations herself.

From the moment Nell meets James Fairbrother, the air positively sizzles. Yet for all his size and power, there’s something amazingly tender in his touch. Could he really be such a depraved rogue? The only way to find out is to beat the devil at his own game… one tempting kiss at a time.

buy A Scoundrel by Moonlight from:
Amazon  |  B&N  |  Book Depository