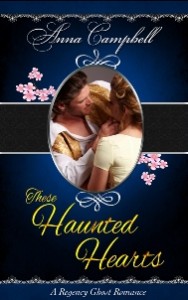 On one fateful wedding day at Marston Hall in 1818, four linked destinies hover in the balance.

Josiah Aston, Earl of Stansfield, wakes to discover he’s seventy years dead and he alone can free his beloved wife Isabella’s tormented soul. But first he must convince her to trust him against all the evidence…

Lady Isabella Verney, beautiful and tempestuous, married the man of her dreams, only to die violently on her wedding day. Every clue points to Josiah as the murderer…

Miles Hartley, Viscount Kendall, is society’s ideal catch, but what does that matter if he can’t convince Calista Aston that he loves her? When an age-old curse strikes, only by proving himself worthy of her faith can he save their happiness…

Lady Calista Aston, noted bluestocking, fears she loves Miles Hartley not wisely, but too well. On her wedding day, her doubts place her at evil’s mercy. When death and disaster loom, is it courage or mad folly to believe that Miles loves her in spite of all her faults?

On one fateful wedding day at Marston Hall in 1818, will the lovers emerge triumphant or will darkness conquer all?

To my dear Readers,

I’ve always loved romantic stories with a touch of the mystical (a mild case of the woo-woos, shall we say?). Movies like The Ghost and Mrs Muir or A Portrait of Jennie have always been among my favorites.

So when the people at Mammoth Books asked me to contribute a story to The Mammoth Book of Ghost Romance, I said yes immediately. So far, my published stories, for all their gothic influences, hadn’t verged on the paranormal and I looked forward to the challenge of incorporating some gentle supernatural influences into my work.

The result was “The Chinese Bed” which appeared in the ghost romance anthology in June 2012. Since then, I’ve had a nagging desire to go back and do a ‘director’s cut’. “The Chinese Bed” wasn’t just my first attempt at writing the magical and the mystical, it was also my first try at a secondary romance. Although in this case, ghostly Josiah Aston and Isabella Verney are at least as important as the Regency (and living) couple Miles Hartley and Calista Aston.

“The Chinese Bed” has now been extended to become These Haunted Hearts: A Regency Ghost Romance. I hope you enjoy this story of a cursed Chinese bed that works its evil magic on two wedding days. Only if our heroes and heroines trust in true love will they prevail against ancient evil.

Watch out for steep staircases and cursed Chinese beds!

Josiah heard the door open behind him. Odd how his senses remained so attuned to the world when he no longer existed as a physical entity. Then all thoughts but one fled.
Isabella stared at him from the doorway.

“My love…” he choked out, stepping forward on shaky legs and reaching for her.

During their courtship, he’d inundated her with a thousand extravagant endearments. It had been a laughing game, what flamboyant compliments he could invent to please this woman he loved with such unfettered passion. He’d called her his treasure of Trebizond, his glorious angel of heaven, his exquisite diamond of Ind, his shining pearl of the Orient.

But all his playful praise had meant only one thing. Isabella was his love and he’d lay down his life for her.

“I’ve scoured the house for you.”

He stepped closer, wondering at her silence, at her lack of movement toward him. She’d so rarely been still. It was part of the quicksilver brilliance of her character. She’d been endlessly fascinating, flashing like a jewel, his darling Isabella.

His darling Isabella who stared at him now as though she beheld a monster.

Her frozen expression made him pause before he touched her. His belly dipped with inchoate foreboding. “Isabella?”

She was trembling and pale as she’d never been in life. He couldn’t mistake the terror in her beautiful black eyes. She still wore the beautiful dress of blue French silk she’d had made for the wedding.  Delicate pearls and summer flowers twined in her intricate coils of shining black hair. She raised her hands in an unmistakable attempt to ward him off. “Stay…stay away from me.”

“I don’t understand,” he said dully, dropping his shaking hands to his sides.

The Earl of Stansfield who apparently she now loathed.

Urgent, outraged questions jammed in Josiah’s throat, but he could see she verged on fleeing if he pressed too hard for answers. Now he’d found her, he couldn’t risk losing her. And who knew whether he’d ever find her again? He still wasn’t sure of the laws that prevailed in this immortal plane.

Very carefully he stepped back, giving Isabella space and hopefully demonstrating benign intentions. He had to find out what was going on, but first he had to banish the dread from her expression. Her quivering fear hit him with the force of a blow to the stomach.

“I won’t touch you.” The words cut at him like razors. “Trust me, Isabella.”

A disbelieving huff of laughter escaped her as she retreated onto the landing, preparing to run.

“No…” He surged toward her again before remembering that she didn’t want him to touch her. Quickly he lowered his arms but not before he caught another flash of panic in her eyes.

Whatever he’d done, it set his intrepid bride quaking with fear. Good God, what was going on here?

He forced himself to remain still. After a few suspenseful seconds, she too came to an unsteady halt against the balustrade at the top of the stairs. She watched him unwaveringly as if expecting him to strike at her like a snake.

She lifted her chin, a poignant echo of the vibrant woman who had led him such a dance before promising to be his. “You can’t hurt me anymore.”

He frowned in incomprehension. “Hurt you? I don’t want to hurt you.”

At the hint of impatience in his voice, she cringed. “Don’t lie to me, Josiah.”

He sucked in a breath and struggled for calm when everything inside him wanted to insist that whatever evil she thought he’d committed, it couldn’t be true. “I’d never lie to you.”

Bitter cynicism unfamiliar to the woman he’d known tightened her expression, although at least she stopped edging away. “Of course you would.”

With every moment, he understood less. Foolishly he’d imagined that he’d understand everything if he could just find Isabella. Well, he’d found her and the mysteries became more baffling than ever.  “Won’t you tell me what I did, Isabella?”

Something in his tone must have convinced her to take his question seriously. A series of emotions crossed her face, fugitive as summer lightning. Fear. Puzzlement. Anger. Then a profound sadness to match the stabbing grief he’d felt when he’d woken without her and realized that he and his beloved were both dead.

Her black gaze settled upon him, somber and lightless as he’d never seen it. “You murdered me, Josiah.”