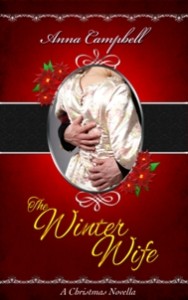 Will a chance meeting on Christmas Eve…
Alicia Sinclair, Countess of Kinvarra, cannot believe that fate has been so cruel as to strand her on the snowy Yorkshire moors with her estranged husband as her only hope of rescue. During their rare encounters, the arrogant earl and his countess act like hostile strangers. Now that Alicia has fallen into Kinvarra’s power, will he seek revenge for her desertion? Or does the dark, passionate man she once adored have entirely different plans for his headstrong wife?

..deliver a second chance at love?
Sebastian Sinclair, Earl of Kinvarra, has spent ten wretched years regretting the mistakes he made with his young bride, but after long separation, the barriers between them are insurmountable. Until an unexpected encounter one stormy night makes him wonder if the barriers of mistrust and thwarted desire are so insurmountable after all. When winter weather traps Sebastian and his proud, lovely wife in an isolated inn, could the earl and his headstrong countess have a Christmas miracle in store?

To my dear Readers,

Thank you so much for checking out The Winter Wife: A Christmas Novella.

I’ve had a yen to do a Christmas story for a long time. I love the hope and joy that are part of this time of year and I think the festive season makes a wonderful background for a romance.

The Winter Wife was originally published in shorter form in 2010 as “Upon a Midnight Clear” in The Mammoth Book of Regency Romance. It was my first reunion romance and I loved the characters. I’ve always wanted the chance both to expand the story and to share it with a wider audience as a stand-alone novella rather than as part of an anthology, much as I love anthologies. This Christmas, I thought, “Why not?”

So I hope you enjoy this chance to meet or revisit my Scottish hero, Sebastian, Earl of Kinvarra, and his estranged countess, Alicia, who meet one Christmas Eve in the middle of a Yorkshire snowstorm. Best wishes!

The crash of shattering wood and the terrified screams of horses pierced the frosty night like a knife.

Sebastian Sinclair, Earl of Kinvarra, swore, brought his restive mount under control, then spurred the animal around the turn in the snowy road. With icy clarity, the full moon lit the white landscape, starkly revealing the disaster before him.

A flashy black curricle lay on its side in a ditch, the hood up against the weather. One horse had broken free and wandered the roadway, harness dragging. The other plunged wildly in the traces, struggling to escape.

Swiftly Kinvarra dismounted, knowing his mare would await his signal, and ran to free the distressed horse. As he slid down the muddy ditch, a hatless man scrambled out of the smashed curricle.

“Are you hurt?” Kinvarra asked, casting a quick eye over him.

“No, I thank you, sir.” The effete blond fellow turned back to the carriage. “Come, darling. Let me assist you.”

A graceful black-gloved hand extended from inside and a cloaked woman emerged with more aplomb than Kinvarra would have believed possible in the circumstances. Indications were that neither traveler was injured, so he concentrated on the trapped horse. When he spoke soothingly to the terrified beast, it quieted to panting stillness, exhausted with thrashing. While Kinvarra checked its legs, murmuring calm assurances, the stranger helped the lady up to the roadside.

The horse shook itself and with a few ungainly jumps, ascended the bank to trot along the road toward its partner. Neither animal seemed to suffer worse than fright, a miracle considering that the curricle was beyond repair.

“Madam, are you injured?” Kinvarra asked as he climbed the ditch. He stuck his riding crop under his arm and brushed his gloved hands together to knock the clinging snow from them. It was a hellishly cold night. Christmas tomorrow would be a chilly affair. But then of course his Christmases had been chilly for years, no matter the weather.

The woman kept her head down. With shock? With shyness? For the sake of propriety? Perhaps he’d stumbled on some elopement or clandestine meeting.

“Madam?” he asked again, more sharply. Whatever her fear of scandal, he needed to know if she required medical assistance.

“Sweeting?” The yellow-haired fop bent to peer into the shadows cast by her hood. “Are you sure you’re unharmed? Speak, my dove. Your silence troubles my soul.”

While Kinvarra digested the man’s outlandish phrasing, the woman stiffened and drew away. “For heaven’s sake, Harold, you’re not giving a recitation at a musicale.” With an impatient gesture, she flung back her hood and glared straight at Kinvarra.

Even though he’d identified her the moment she spoke, he found himself staring dumbstruck into her face. A piquant, vivid, pointed face under an untidy tumble of luxuriant gold hair.

Furious and incredulous, he wheeled on the milksop. “What the devil are you doing with my wife?”