Stranded with the Scottish Earl 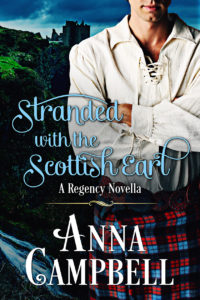 Blame it on the rain…

After her engagement to a local landowner ends in scandal and recrimination, Miss Charlotte Warren vows never to marry. Her father might write to say he’s found her the perfect husband – she’s sticking to her spinsterish guns. But when in the middle of a spring flood, her father’s choice turns up on the doorstep under an unconvincing alias, she has no choice but to take him in.

Except he’s very handsome… And he kisses like a dream…

And when a girl finds herself trapped alone in a great big house with a roguish Scottish earl, who knows what will happen? Even to the most resolute and independent lady.

Ewan Macrae, Earl of Lyle, doesn’t believe in love at first sight—until he sees Charlotte Warren’s portrait. One glimpse of the real Charlotte, and he knows this is the lassie he means to carry off to the Highlands as his bride.

But his beloved is no easy conquest. She’s stubborn and headstrong, and dead set against becoming a wife.

Will lashings of Scottish charm, some highly convenient privacy, a scattering of sizzling kisses, and an eventful day battling the elements to save the spring lambs combine to change Miss Warren’s mind about marriage?

They most definitely will, if this proud Scotsman has any say in the matter!

This scene takes place when Charlotte and Lyle find shelter from the rain in a hut on the Warren estate. Charlotte has just confessed that one reason she doesn’t want to marry is that she’s already suffered a disastrous engagement.

Charlotte waited for Lyle to express surprise or sympathy, but he remained quiet. His lordship was a good listener, she’d already noted, with a talent for making the speaker feel like they received his complete attention. It was infernally appealing.

“I was very young,” she went on, before she’d even decided to share the story.

Lyle’s lips curved upward, and he settled his back against the wall as if he was in no hurry to go anywhere. “So this all happened eons ago.”

When had she started to enjoy his teasing? The affectionate humor in his deep voice warmed her better than a blazing fire. “I was eighteen. Ronald was twenty. We grew up together. His family’s estate is only a couple of miles away. Everyone always expected that we’d make a match.”

“I assume Ronald is the fellow responsible for the nice kisses. I almost pity the poor sod.” Lyle’s hand curled around hers where it pleated her skirt. More warmth. Just as irresistible as the soft Scottish voice.

“He’s a good man. Smart. Honest. Conscientious. Sporting.” She made a halfhearted attempt to pull away, but wasn’t sorry when she didn’t succeed. “You’d like him if you met him.”

“As long as he keeps his nice wee kisses to himself, I might.”

She cast Lyle a quick glance. If she didn’t want to marry him, she had no right to bask in his jealousy. But she did. Heaven help her, she did. “I think these days he’s keeping them for his wife Frances and his five children.”

“That’s all right, then.” Lyle looked less like a grumpy bear. “I might restrain myself from punching his handsome nose.” He paused. “I assume he’s handsome.”

“Breathtaking,” Charlotte said, wondering why this confession of a wound that had always smarted became almost enjoyable. “Fair hair, an angelic face, and a graceful form. He’s a marvelous dancer, too.”

She realized she was smiling. Which was odd. She’d never before managed to find any amusement in her disastrous engagement. “Compared to a volatile Celt, perhaps he is.”

Thank goodness Lyle didn’t follow up on her betraying remark. The last thing she needed was him guessing how much she found about him to admire.

And he hadn’t even kissed her today.

“Ronald and I and our families established a private understanding at Easter, with the official announcement to take place at the Christmas ball. The wedding was set for the next Easter.” Her voice lowered, and Lyle’s grip on her hand tightened. She’d never spoken of these awful events. “But the engagement ended before autumn.”

“Did the numbskull jilt you?”

“He must be if he had the chance to marry you and he botched it.”

She liked that Lyle was on her side. She wondered if once he heard the rest of the sorry tale, he’d remain so partisan. “I jilted him. There was a lot of local ill will as a result, as I’m sure you can imagine. Ronald’s mother hasn’t spoken to me since—and she was my mother’s best friend.”

She shrugged. She picked up Lyle’s bad habits. “I thought I did. We had a lot in common. I certainly liked him, and I believe he liked me.”

Guilt rose to choke her. It always did when she thought of how shamefully she’d treated Ronald. This was why she hated revisiting her brief engagement. Unable to sit still any longer, she surged to her feet, breaking Lyle’s hold.

“At least he liked me when I agreed to marry him. Once he decided to make me his wife, he also decided that I needed remodeling.”

Staring down into Lyle’s glittering blue eyes, she had the strangest feeling that she didn’t need to tell him the rest. He already guessed what had happened. Somehow that made it easier to relate the string of woes that followed her acceptance of Ronald’s proposal. “I’m a headstrong, stubborn creature.”

Another flash of that fond, wry smile. “You don’t say.”

“Shocking, isn’t it?” This newfound ability to laugh at her broken betrothal was astonishing. “In many ways, my father brought me up as he’d bring up a son. Ronald knew my independent nature, even appreciated it in a childhood chum.”

“No, not so much in a bride,” she said in a subdued tone.

“And you say he’s not a numbskull? He found a lassie with brains and spirit, and tried to turn her into a cipher.”

“It wasn’t quite that bad,” she said, although looking back with more mature eyes, it had been that bad. She twisted her hands together. “And I did try to be what he wanted.”

“But you couldn’t sustain the act.”

She cast Lyle a grateful look. He did understand. “Before we were engaged, we never fought, but afterward, life was one constant quarrel. In his eyes, I could do nothing right.”

“Yes. And nobody could see why. Papa accepted my decision—I have a funny feeling he never approved, although Ronald was frightfully eligible and the catch of the county. Ronald’s family never forgave me. The neighbors might accept my eccentricities with some good grace now, but back then, I was a pariah.”

“The blockhead would have taken you back, if you showed suitable contrition and promised lifelong obedience, I imagine.”

Surprised, she met his eyes. “How did you know?”

“I’m sure the poor bastard couldn’t help wanting your fire, even while it terrified the trousers off him. I bet he and…Frances, is it? I’ll wager every time he kisses Frances, he’s caught between gratitude for such a sweet wee wife, and regret that he lost his chance at claiming all your ardor.”

“No, mo chridhe, I’m feeling genuinely sorry for that idiot Ronald, even if I want to knock his block off.”

She blinked back tears. Stupid that Lyle’s praise moved her so powerfully. She fought to keep her voice steady. “I could never match what Ronald wanted.”

“And in the end, your soul rebelled, as it had to. You couldn’t sign up to living a lie for the rest of your days.”

Lyle rose and placed his hands on her arms. Immediate strength flowed into her, and she stood straighter. “I’m glad that Ronald was such a clod.”

“Are you?” she said doubtfully.

“Aye. Imagine if I’d met you, and you were already married to a dunderhead who didn’t deserve you.” 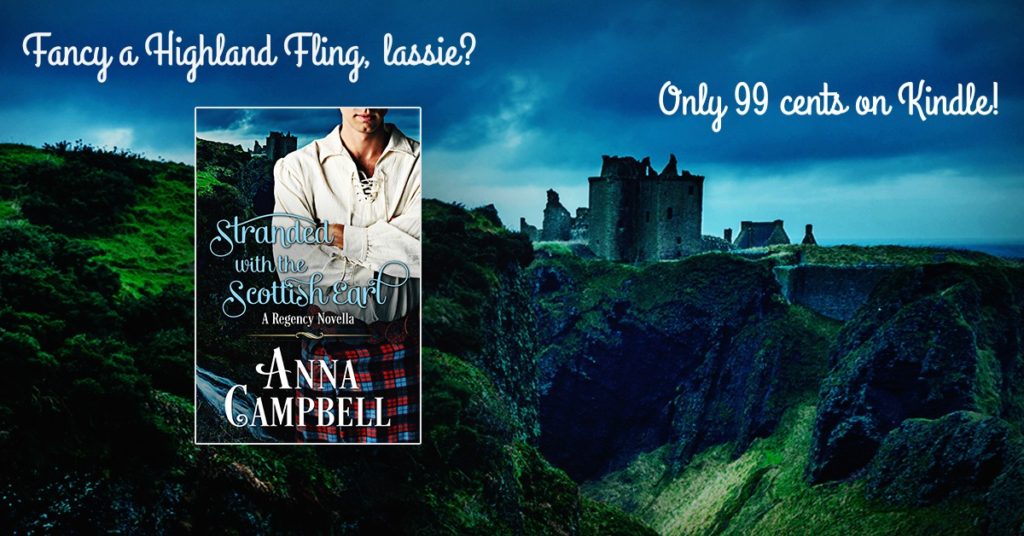