Days of Rakes and Roses 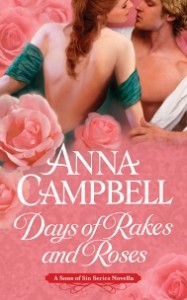 a Sons of Sin novella

Lady Lydia Rothermere has spent the past decade trying to make up for a single, youthful moment of passion. Now the image of propriety, Lydia knows her future rests on never straying outside society’s rigid rules; but hiding away the desire that runs through her is harder than she could have ever dreamed. Now as Lydia prepares for a marriage that will suit her family, but not her heart, Lydia must decide what’s more important: propriety or passion?

Simon Metcalf is a rake and adventurer. But for all his experience, nothing can compare to the kiss he stole from the captivating Lydia Rothermere ten years ago. Simon can scarcely believe he’s about to lose the one woman he’s never forgotten. The attraction between them is irresistible, yet Lydia refuses to forsake her engagement. With his heart on the line, will Simon prove that love is a risk worth taking?

Buy A Day of Rakes and Roses from:
Amazon• Barnes & Noble

At last the squat woman stopped haranguing Lydia and stumped away. By now, the supper room was almost empty and servants had started to clear away the silver and porcelain serving dishes from the long tables. Still Simon lounged against the wall with totally spurious indolence. Every instinct was on hunting alert. How could it be otherwise when the woman he desired above all others hovered within reach and unfettered by her usual entourage?

As if he read her mind, he saw her loop her gold and cream shawl more securely around her arms and turn away with a purposeful expression, intent on a fast escape. True to his promise in the carriage, he didn’t try to stop her, however swiftly the words begging her to stay leaped to his lips.

She’d made her decision. He had no right to interfere.

She took one step. Two. The third step was slower as if she forced herself to move. Then she paused a few feet from the exit and her back tensed straight as a ruler.

She was still here. With him. Alone apart from the servants. Elation slammed through Simon. She wasn’t quite as ready to say good-bye as she wanted him to believe.

Hell, he knew he was wrong to pursue the fight. But he was merely human and tested to the verge of madness. Her hesitation had sealed her fate. He couldn’t let everything end like this and call himself a man.

Honor be damned. He surged forward, covering the space in a couple of quick strides. He grabbed her arm where it was bare above her long white glove.

“Simon, what-” Lydia gasped, jerking in his hold without breaking free. She turned on him in a swirl of green silk and a flash of golden eyes, bright with alarm and barely concealed longing.

“Five minutes. That’s all I ask.” It wasn’t all he wanted, but it was the most he could expect. More than he should expect.

“I can’t,” she stammered even as he swept her through the French doors and onto the terrace. “You know I can’t.”

Torches on the balustrades marked the limit of the outdoor walk above the gardens and bright light spilled from the house. Even now it would be easy to keep this encounter civilized, decorous, of no interest to an observer.

Except that he’d had it up to his damned neck with civilized and decorous. Only primitive, animal desire would get him what he wanted now.

With a ruthless deftness learned in the dangerous byways of Europe, Simon firmed his grip and shoved Lydia deep into the shadows between the open doors. Before she could protest, even, God forbid, call for help, he swung her around until her back hit the mansion’s stone wall.

She landed with a slight bounce and released a shocked huff of breath. His hold automatically gentled, even if nothing short of an advancing regiment could make him let her go. He didn’t want to hurt her. He never wanted that, although he knew that his actions as a young man had exacted a painful toll.

Through the darkness, he saw the shine of her eyes and the rich cream of her skin. She was panting, each breath making her bosom rise and fall. The sight stoked the fever that had compelled him into this recklessness. His heedless haste had disturbed her coiffure, dislodging one long tendril of red to drift down over her shoulder.

He liked to see her looking less than perfect. His Lydia wasn’t the dignified paragon that she presented to society. She was the living, breathing woman who had kissed him until he thought he’d combust.

“Simon, let me go back into the house.” Her voice was low and unsteady.

“Just give me this much,” he said, hating his shaking desperation but unable to rein it in. “I need- something from you, something to keep as mine when you’ve given everything else to that blackguard.”

“You promised you’d stay away.” Her voice broke with strain.

Damn her for resisting him. Except even now when she denied everything between them, he couldn’t damn her. He loved her too much. He’d thought living with her absence had been the purest hell. Since returning to England, he’d discovered that having her near, yet out of reach, surpassed any torture devised by the Spanish Inquisition.

He leaned closer, inhaling her sweet scent, roses and Lydia and a hint of female musk that despite everything offered him hope. “This is the last time, I swear.”

“You’re being cruel.” She turned toward the doors. On her ashen cheeks, tears shimmered in the torchlight. He was a cad, to torment her like this.

“I’m leaving, Lydia.” He raised an unsteady hand to caress away her tears. Her cheek was satiny beneath his fingers. “I can’t stay and watch you marry another man.”