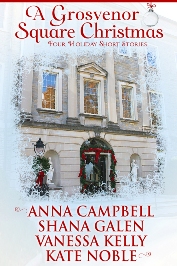 from A Grosvenor Square Christmas

Down through the years, enchantment touches a tall gray house in Grosvenor Square. The legend of Lady Winterson’s Christmas ball promises true love and happiness to one lucky couple. Who will feel the magic this winter?

1803 – The Seduction of a Duchess by Shana Galen
Rowena Harcourt, the Duchess of Valere, never forgot the handsome footman who helped her escape the French Revolution. For fourteen years, Gabriel Lamarque has loved Rowena-now at Lady Winterson’s Christmas ball, has fate finally delivered a chance to win her hand?

1818 – One Kiss for Christmas by Vanessa Kelly
Nigel Dash is London’s most reliable gentleman, a reputation he never minded until he fell in love with beautiful Amelia Easton. Unfortunately, Amelia sees Nigel as a dependable friend, not a dashing suitor. At Lady Winterson’s famous Christmas ball, Nigel vows to change Amelia’s mind-by sweeping her off her feet.

1825 – His Christmas Cinderella by Anna Campbell
At the season’s most glittering ball, a girl who has never dared to dream of forever after discovers a Christmas miracle.

1830 – The Last First Kiss by Kate Noble
Susannah Westforth has always loved Sebastian Beckett – but he’s only ever seen her as a friend. When Sebastian takes his Grand Tour, Susannah transforms herself into a woman he’ll notice. Now Sebastian is back, just in time for Lady Winterson’s Christmas ball – but the last thing he expects to see is his little Susie, all grown up…

You’re invited to join the whirling dance at Lady Winterson’s sparkling Christmas ball, where miracles happen and true love shines forever. How can you resist?

There is very little about the gray stone house that makes it different from the houses to the right or left of it.  Indeed, the entire street, the entire square is remarkably the same.  The same stone.  The same windows.  The same incredible wealth on display.
Well, it is Grosvenor Square, after all.  It has to have some grandeur.
But for all the elevated sameness, No. 3 Grosvenor Square stands out.
Perhaps it is the owner.  After all, Lucy Frost, the widowed Countess of Winterson is a reigning doyen of the ton.  (How could she not be with a name like that?)  It has been said, not proven, that she has a trail of discarded lovers the length of Pall Mall. Said too, yet not proven, that her husband died happily, after a fit of laughter brought on by her marvelous wit. Possibly in bed.  But that is merely delicious speculation.
What has been proven is that she throws a fabulous party.  Lady Winterson’s eccentricity and popularity would certainly add to No. 3’s allure.
Then again, perhaps it is the butler.  Philbert was procured by Lady Winterson when she purchased the house, and found she needed someone tall enough to hang holiday garland.  He has been standing at the door of No. 3 for decades.  Curious, since he doesn’t look any older than a man half his (unknown) age.
Philbert is an institution, and knows the secrets of everyone who passes through No. 3’s door, as well as how they take their tea.  Surely, he can account for the way the house draws the eye of everyone who promenades past.
Or perhaps, it is something in the house itself.  Something hidden in its stones, that glitters and glows and stores itself up until it cannot help but burst forth, shining on those darkest nights in the depths of winter.  On those special nights, when Lady Winterson throws her annual Christmas Ball, people flood No. 3, bringing all their hopes, their excitement and the merriment of the season with them.
But be it the house, the hostess, or her butler, it is during the Christmas Ball every year, for one special couple, that No. 3 Grosvenor Square truly is magic.
As long as they look in the right place.

London, December 24th, 1825
In a borrowed bed in a borrowed room, she waited for him.
Although she’d lit the fire in the grate, she shivered a little under the threadbare blankets. The white light of a London winter poured through the windows. Tucked away in this shabby chamber high in Soho, she always felt like a princess in a tower, above the grimy reality of the noise and traffic below.
Every Tuesday for the past six weeks, Campion had met him here. He always came to her during these quiet midafternoon hours. Before the fashionable crowd promenaded in Hyde Park. Before high society prepared for the opera or the gambling hells or glittering parties.
Tonight the most glamorous event of the season took place. The Countess of Winterson’s Christmas ball in Grosvenor Square. A spellbinding fantasy of an evening where magic descended, romance prevailed, and true love emerged triumphant. At Lucy Frost’s annual ball, the legend was that faithful lovers would find their happy ending against all odds.
Campion stifled a pang of envy for whatever lucky couple fortune favored this Christmas Eve. She’d known before she became a temporary mistress that no wedding bells would ring out for her and the man she loved.
Instead all they had were Tuesday afternoons and occasional discreet meetings at society gatherings. Compared to her humble circumstances, he moved in the most elevated circles. Their encounters beyond this room were so rare that Campion stored them in her memory like priceless jewels in a coffer. A whispered word here or there. The surreptitious brush of hands. Once they’d even snatched a few kisses in a dark garden, kisses so hot she hadn’t felt the snow falling about them.
On one unforgettable occasion, she’d connived to escape with him to Vauxhall’s shadowy walks. They’d held hands and spoken romantic nonsense and acted like lovers. Until too many people had recognized him and she’d feared that someone might discover her identity beneath mask and cape. For her reputation’s sake, they’d abandoned the pleasure gardens before she’d fulfilled her dream to dance with him. Just once.
Now she strained for the sound of his boots on the stairs. He always walked as if he knew exactly where he wanted to be. For the last month and a half, at least on a Tuesday, he’d wanted to be with her. As a result, she’d discovered delight beyond measure and a love that would never die.
But yesterday, she’d learned that this must be their last afternoon. She had no choice in the matter. Such was the harsh price of being a penniless dependent, at the mercy of a selfish woman’s whim. Tomorrow when Campion returned to the country, the gates of paradise would slam eternally shut behind her.
Blindly she stared up at the sagging, stained ceiling and told herself that she wouldn’t greet him with tears. After such radiant joy, she refused to leave a final impression of a weeping, clinging coward.
But courage was so difficult when the idea of never again lying in his arms cut her like a knife. He’d awoken part of her soul. She didn’t know how she could endure losing both her lover and the woman she became when she was with him.
But, oh, how she wished he’d hurry. Every stolen second of this afternoon was precious. Because ahead of her stretched the long, barren, lonely years.
At last she heard his determined tread. Her belly tightened in anticipation and her toes curled against the linen sheets. She intended to make this an encounter he’d never forget, even when he’d wed a high-born heiress and settled into life on his far away estates. She’d brand these hours onto his heart, so that when he lay old and contented and surrounded by the children she wouldn’t give him, his last breath whispered her name.
The door swept open and bumped against the faded wallpaper. Just the sight of him flooded her with joy. She’d never been in love before. Something essential within her recognized that she’d never love like this again.
Visit Shana Galen’s website for an excerpt of “The Seduction of a Duchess”
Visit Vanessa Kelly’s website for an excerpt of “One Kiss for Christmas”
Visit Kate Noble’s website for an excerpt of “The Last First Kiss”