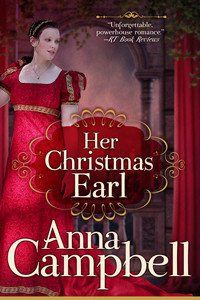 To save her hen-witted sister from scandal, Philippa Sanders ventures into a rake’s bedroom – and into his power. Now her reputation hangs by a thread and only a hurried marriage can rescue her. Is the Earl of Erskine the heartless libertine the world believes? Or will Philippa discover unexpected honor in a man notorious for his wild ways?

Blair Hume, the dissolute Earl of Erskine, has had his eye on the intriguing Miss Sanders since he arrived at this deadly dull house party. Now a reckless act delivers this beguiling woman into his hands as a delightful Christmas gift. Does fate offer him a fleeting Yuletide diversion? Or will this Christmas Eve encounter spark a passion to last a lifetime?