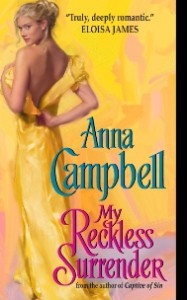 A well-practiced rake, weary of easy conquests and empty pleasures, Tarquin Vale, Earl of Ashcroft, knows women – and his every instinct warns him to beware of this one. Diana Carrick’s brazen overtures have thrown the haunted, sinfully handsome lord completely off his guard. Why, the exquisite temptress stated outright that she wishes to be his lover! But it is neither Diana’s boldness nor her beauty that intrigues him so – it is the innocence he senses behind her worldly mask.

Intent upon the seduction that will finally free her, Diana has set her sights on the notorious Ashcroft – never dreaming that there is much more to the enigmatic rogue than sin and deviltry. His kiss is bewitching,  his caress intoxicating – and even the dangerous secret Diana must protect cannot shield her from Ashcroft’s dark allure.

Unwittingly yet most willingly, they are playing with fire. Now the fuse has been lit and there is no escape – except surrender.

“Perhaps I want you,” Ashcroft murmured. And watched her gray eyes darken with fear and a fascination she couldn’t hide, much as he knew she tried to.

Which made no sense when she’d boldly offered herself, cool as a drink of spring water on a summer’s day.

She had beautiful eyes. Large, clear and brilliant, shadowed by thick dark gold lashes that matched her elegant brows but not her bright gold hair, just visible under the bonnet.

Ashcroft frowned down at the mysterious Diana, the pores of his skin tightening with unwelcome arousal. And warning.

Nothing about her added up. He didn’t trust her. Instinct urged him to throw her out on her stylish rump and pray he never encountered her again.

Yet he wasn’t entirely ready to let her go.

This close, his senses filled with her scent. Green apples. Disconcertingly innocent. And beneath that fresh perfume, a subtle female warmth.

Since she’d raised her veils with that absurdly dramatic gesture, he hadn’t been able to look away. She was exquisite. Slender and graceful, with a purity of feature he’d never seen before. She looked like a Madonna, yet hawked herself like a streetwalker.

Any man would pay a fortune for her favors. If she was a courtesan. He already knew she wasn’t.

Perhaps she was the country widow she claimed. His intuition insisted she wasn’t completely honest. If not about everything, about most of what she’d said.

His intuition, unlike the women he’d known, never lied.

“You don’t want me.” Resentment beaded her low voice. “You just said.”

A pulse fluttered under the delicate skin of her bare throat. He told himself he should take pity on her. Except she didn’t cringe away and her face held stubbornness as well as fear.

He’d always admired courage. Unwilling interest wove its way through anger and doubt. “Perhaps I’d like a taste of what’s on offer before I decide whether I want more.”

Her white throat moved as she swallowed. “You play with me.”

His response was curt. “You come here unbidden and insult me. I deserve some fleeting entertainment as recompense.”

He leaned closer and bent his head to the crook of her neck and shoulder. With every second, the urge to taste her burgeoned, but he reined it in. Instead he drew in a lungful of her sweet fragrance.

“That only added to the insult,” he murmured. “You appear from nowhere, proposition me as if I were a whore, then you’re surprised I’m less than overwhelmed at your generosity.”

He heard the ragged saw of her breath, but she didn’t pull away. He was astonished he had to struggle to resist kissing the smooth flesh so close to his lips.

“I can’t be the first woman who’s wanted to-sleep with you.” Her voice strengthened. “You’ve invited plenty of women into your bed. What’s sauce for the goose is sauce for the gander.”

He laughed softly and watched her tremble as his breath brushed her skin. “This gander likes to do his own chasing, Madam Goose.”

“So-” She paused and he knew she scrambled after her scattered courage. “Are you chasing?”

He lifted his head and studied her. Except for two hectic flags of color high on her cheekbones, she was pale. Her pupils dilated, the black threatening to swallow the gray. A pink tongue flickered out to moisten her lips.

Before this he’d toyed with her. In that second, the game became serious.

By God, he could take her. She’d offered herself. He only needed to hike up her skirts, part her thighs and ease his aching hardness in her wet heat.

The idea filled his head with fire.

The onset of such powerful desire made him pause. His instincts still shrieked danger.

Very slowly he edged away, although his hand remained splayed next to her head on the door. Each inch he removed himself felt like an excruciating mile. That in itself was admonition to banish this puzzling visitor.

Her low voice played along his veins like music. In spite of his best efforts, he couldn’t help but imagine that voice whispering salacious wishes in the privacy of his bed.

As she spoke, her lips parted. All he saw was that lush, glistening mouth. The hint of darkness within. While the rest of her features could be carved for a cathedral sanctuary, her mouth was pure sin. He already knew she’d be delicious.  Against every dictate of self-preservation, he leaned down. One taste. One taste only.