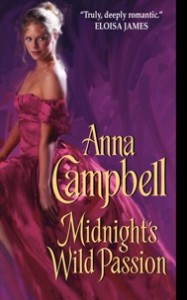 The dashing, licentious Marquess of Ranelaw can never forgive Godfrey Demarest for ruining his sister – now the time has come to repay the villain in the same coin. But one formidably intriguing impediment stands in the way of Nicholas’ vengeance: Miss Antonia Smith, companion to his foe’s unsuspecting daughter.

Having herself been deceived and disgraced by a rogue – banished by her privileged family as a result and forced to live a lie – Antonia vows to protect her charge from the same cruel fate. She recognizes Ranelaw for the shameless blackguard he is, and will devote every ounce of her intelligence and resolve to thwarting him.

Yet Antonia has always had a fatal weakness for rakes…

A distant hum drifted from inside but otherwise the night was blessedly quiet. Antonia inhaled again and felt her tension unwind.

The season barely started. If only Cassie quickly fell in love with some eligible gentleman, bypassing all risk of disaster with the rakish marquess. Antonia would go insane if she had to devote the next months to keeping Ranelaw away from Cassandra. Between her prickling awareness, Ranelaw’s lures and the girl’s rebelliousness, this London visit stretched ahead as an ordeal to try anyone’s nerves.

“Careless shepherdess. Aren’t you afraid I’ll whisk your lamb away?”

Had her very thoughts conjured up Ranelaw? Her heartbeat a wayward gallop, she straightened and turned to face the open French doors. In the darkness on the edge of the balcony, the marquess lounged against the wall. His very stillness breathed danger.

She fumbled to replace her glasses, although in this light, he wouldn’t make out her features. “You admit your purposes are dishonorable?”

She should go inside. But something – perhaps the untamed spirit she’d never quite conquered, no matter how she tried – kept her leaning against the balustrade studying the notorious rake who made her blood surge. And who reminded her of so much she’d struggled to forget through ten lonely, painful years.

He shifted, a patch of darker shadow in the shadows. She imagined the smile that curled his long mouth. He always acted as if he considered life a sardonic joke. His cynical amusement shouldn’t be attractive, but it was.

“Even if I denied that, you wouldn’t believe me.”

He gave a soft, knowing laugh, already familiar. The sound brushed across her skin like thick velvet. Why, oh, why did sin always adopt such compelling guise? She knew to her bones what this man was, yet nothing stemmed the fascination.

Perhaps she could take advantage of this encounter to speak more plainly than she could in a crowded ballroom. “I want you to leave Cassandra alone.”

He prowled forward, his movements smooth and lethal as the panther she’d compared him to earlier. The uncertain light from inside revealed that he wasn’t smiling and that his gaze remained intent upon her.

Another frisson of awareness rippled through her. Thank heaven she was so far below his touch, in both rank and beauty. If he leveled those glinting eyes on her with any purpose other than subverting her duty, she’d be lost.

“Why should I care about your wishes, Miss Smith?”

Antonia spread her hands and decided on honesty. “Cassandra’s too good for you.”

Her eyes adjusted to the darkness and she saw him more clearly than she wanted. A ghost of a smile flickered. “She has better manners than her chaperone, I’ll give her that.”

“Let her find some decent young man to make her happy.”

“Bore her stiff, you mean?”

Without making any overt move, he was far too close. Looming above her so his head blocked the stars. The faint illumination from inside cast a sheen across his gold hair as if even the candlelight couldn’t resist touching him.

Despair engulfed Antonia as her gaze clung hungrily to his lean, rangy body. It was wrong, wrong, wrong that he was so beautiful. It was wrong that she was so susceptible to his beauty. Beauty was an accident, a random arrangement of muscle and bone and coloring. It shouldn’t have this power to cut to her heart.

“What-what are you doing?” she asked nervously, abandoning her pretense at bravery. She backed away, to find herself trapped against the balustrade.

“Proving your expectations correct, of course,” he murmured, bending nearer.