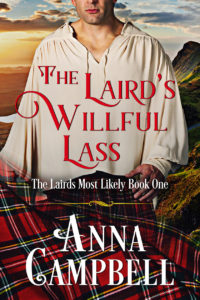 An untamed man as immovable as a Highland mountain…

Fergus Mackinnon, autocratic Laird of Achnasheen, likes to be in charge. When he was little more than a lad, he became master of his Scottish estate, and he’s learned to rely on his unfailing judgment. So has everyone else in his corner of the world. He sees no reason for his bride—when he finds her—to be any different.

A headstrong woman from the warm and passionate south…

Marina Lucchetti knows all about fighting her way through a wall of masculine arrogance. In her native Florence, she’s become a successful artist, no easy feat for a woman. Now a commission to paint a series of Highland scenes promises to spread her fame far and wide. When a carriage accident strands her at Achnasheen for a few weeks, it’s a mixed blessing. The magnificent landscape offers everything her artistic soul could desire. If only she can resist the impulse to smash her easel across the laird’s obstinate head.

When two fiery souls come together, a conflagration flares.

Marina is Fergus’s worst nightmare—a woman who defies a man’s guidance. Fergus challenges everything Marina believes about a woman’s right to choose her path. No two people could be less suited. But when irresistible passion enters the equation, good sense soon jumps into the loch.

Will the desire between Fergus and Marina blaze hot, then fade to ashes? Or will the imperious laird and his willful lass discover that their differences aren’t insurmountable after all, but the spice that will flavor a lifetime of happiness?

Fergus lounged back in the thick grass and watched a pair of golden eagles perform lazy circles in the sky above him. As his eyes closed, for some odd reason, he remembered that eagles mated for life.

When he opened his eyes, the sun had moved toward the west. He was warm, and drowsiness weighted his limbs. Sitting facing him was a lovely woman with a touch of sunburn across her slanted cheekbones and on the bridge of her straight nose. Marina had brought a hat, but he noticed she generally forgot to wear it. Her sketchbook lay open on her lap, and she was watching him with curious eyes.

A tender smile curved his lips, and he brushed his hand across the hint of color. “The sun has caught ye, lassie,” he murmured.

As if it was the most natural thing in the world, he slid his fingers behind her neck and drew her down until her lips met his.

Her mouth was soft, and he tasted her gasp of surprise. Sweet warmth flooded him as for a dizzying moment, her lips fluttered against his.

The muscles beneath his hand tensed, and he waited for her to pull away. Then in a movement so subtle, if he hadn’t been touching her, he would never have recognized it, she shifted to a more comfortable angle and leaned closer. Her mouth turned even softer, as she joined in the kiss.

Satisfaction flooded him. His hold on her nape firmed, and he swept his tongue along the seam of her lips in a request to enter the honeyed interior.

For a long moment, her lips remained closed. The delay before she yielded gave him a chance to drink in a wealth of splendid details. The heat of the afternoon sun on this sheltered dip in the hillside. The loose strands of silky hair tickling his fingers. The scents of heather in the air, and lavender soap rising from her skin. The lush cushion of her lips.

With a faint sound of pleasure, that sumptuous mouth opened, and her tongue flickered out to meet his. The contact was almost shy, but it made his heart expand with longing for more. Growling deep in his chest, he caught her waist with his free hand. He rolled over until she lay beneath him.

Now he’d captured her ready for ravishing, the kiss caught fire and he tasted her fully. She was luscious as toffee. More sweetness flared into passion when her tongue danced with his and her arms slid around his back to hold him closer.

She gave herself up with a wholehearted voluptuousness that beggared his experience. He’d kissed plenty of lassies, even bedded a few. Never had he lost himself in a sensual mist, the way he did kissing Marina.

It was inevitable that he should want more. Wondered if perhaps he didn’t need to negotiate too hard to find his way into her bed after all. Would this glorious kiss in the open air lead without hindrance to possessing her long, lissome body?

He sucked the tip of her tongue between his lips and placed his hand on the delicious rise of her breast. She moaned into his mouth and arched up. He settled between her thighs, cursing the hampering skirts between him and where he wanted to be.

When he raised his head to look down into her face, her eyes were heavy with passion. Her mouth was red and swollen from his kisses, and parted to give him a glimpse of small white teeth. Her skin glowed with awakening desire. She was the most gorgeous sight he’d ever beheld.

He gave her another quick kiss, although he could already see the dreamy pleasure draining away, replaced by a troubled expression.

He frowned. “Are ye calling me a…”

As he’d hoped, the frown dissolved in humor. “No. Enough. Basta means ‘enough.’”

In his opinion, he’d achieved anything but enough. He should have guessed he was too optimistic when he imagined this would be simple. He shifted to the side to rest on one elbow and stare down at her.

“That was foolish,” she said softly, as her gaze swept down his body.

“Perhaps.” He dug up a smile and smoothed the strands of midnight hair clinging to her wide forehead. “But I’ve wanted to do that since I first saw you.”

The pleasure that brightened her face at his admission made him kiss her again. This time her push on his shoulders was more emphatic. “This won’t do, Mackinnon.”

She pursed her lips in frustration. It made him want to kiss her again. “It’s safer if I call you Mackinnon.”

“Who cares about safety?”

He traced a line down her cheek. Her skin was soft and smooth. He couldn’t wait to see the rest of it. Surely soon he would.

“Are you saying ye didn’t think about kissing me, too?” He’d thought about more than kissing, but didn’t want to push his luck.

She lifted a hand to bat his caressing fingers away. “You jolly well know I have. But that doesn’t mean we should give into temptation.”

Lord above, she was pretty. Even when she was cross, she was pretty. Particularly then, because the heat sparking in those lustrous dark eyes made him think of a different heat that he and she could conjure together. “Why not? Do ye have a lover who owns your loyalty? You haven’t said so.”

“Why on earth would I say anything?”

Displeasure pricked at his arrogance. “Because ye know I’m interested.” He paused and stared at her, surprised at how important her answer was. He’d wanted her before, but since kissing her, he was in a fever to have her. “Is there a lover, Marina?”

Her eyes flickered down. She had such lush eyelashes. “No,” she mumbled.

“Not for me either. And you have no husband.”

“And I have no wife. If we want one another, why should we resist?”

Her eyes opened and settled on him with a cynical light that placed another puncture in his satisfaction. Why didn’t he remember that talking to this perverse creature was likely to tie him into knots? He should have just kept kissing her until she gave in.

“I’m available. You’re available. The nights are getting cold. We may as well start going at one another like rabbits?”

Damn it, now he was annoyed, and he’d been in such a good mood after his nap and kissing her. He sat up and scowled. “You’re twisting my words.”

She sat up, too, and he regretted the foot of space stretching between them. She’d been so lovely and loose-limbed in his arms. Now as she pulled her knees up to her chest and curled her arms around them, she was closed up like a barricaded door. “Tell me what you want.”

His exasperation couldn’t change that. In fact, every word she spoke stirred the urge to kiss that insolent mouth over and over until she gave up the fight.

“I want you to be my mistress,” he said baldly.