The Gifts of Christmas 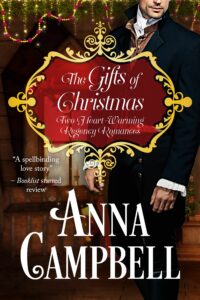 At last two reader favorites together in print for the first time!

At Christmastime, a stranger crossing the threshold means good fortune…

When Josiah Hale, society’s favorite aristocratic architect, stumbles upon an isolated manor house in the middle of a snowstorm, he feels like he’s entered a fairytale world. And Sleeping Beauty in this secret corner of Yorkshire is lovely, vulnerable Maggie Carr, surely a princess disguised as a humble housekeeper. Is Josiah her prince – or the man who will break her heart and leave her life in ruins?

But is the stranger’s arrival lucky for the girl Christmas forgot?

Maggie Carr has worked as a housekeeper at isolated Thorncroft Hall since her beloved mother died five years ago. No matter how often she tells herself she’s accustomed to being poor and alone, Christmas always stirs poignant memories of a time when she had a place in the world and a family to love. But this Christmas, a handsome stranger bursts into her solitary world and makes her feel like a desirable woman. Maggie has already lost so much to cruel fate. Now as the season advances and she finds herself in thrall to the man who challenges her loneliness and turns winter nights to sultry summer, what price will this irresistible passion demand of her?

Will the Yuletide enchantment vanish with the season’s decorations? Or have Maggie and her Christmas stranger discovered a magic to sustain them through a lifetime of happiness?

Will a chance meeting on Christmas Eve…

Alicia Sinclair, Countess of Kinvarra, cannot believe that fate has been so cruel as to strand her on the snowy Yorkshire moors with her estranged husband as her only hope of rescue. During their rare encounters, the arrogant earl and his countess act like hostile strangers. Now that Alicia has fallen into Kinvarra’s power, will he seek revenge for her desertion? Or does the dark, passionate man she once adored have entirely different plans for his headstrong wife?

..deliver a second chance at love?

Sebastian Sinclair, Earl of Kinvarra, has spent ten wretched years regretting the mistakes he made with his young bride, but after long separation, the barriers between them are insurmountable. Until an unexpected encounter one stormy night makes him wonder if the barriers of mistrust and thwarted desire are so insurmountable after all. When winter weather traps Sebastian and his proud, lovely wife in an isolated inn, could the earl and his headstrong countess have a Christmas miracle in store?

Available in PRINT from: Amazon, The Book Depository, Booktopia